But how is that done?

The five forces concept is now one of the most popular tools for, as Porter put it in a video interview, “looking at any industry and understanding the structural, underlying drivers of profitability and competition.”

Defined broadly, “consumer brand” is any business that makes and sells its own branded products.

Each of these products is an entry into an industry. For Daring Foods, the industry might be meat replacements. Earlybird could be competing in the supplements industry.

These companies are all successful in their industry. They have identified a strategy that leads to profitability.

Not every product, however, will generate profits. And the profit potential varies among products and industries. Porter argues that there is a relationship between profit and competition and that businesses often define competition too narrowly.

In Porter’s model, the five competitive forces are: 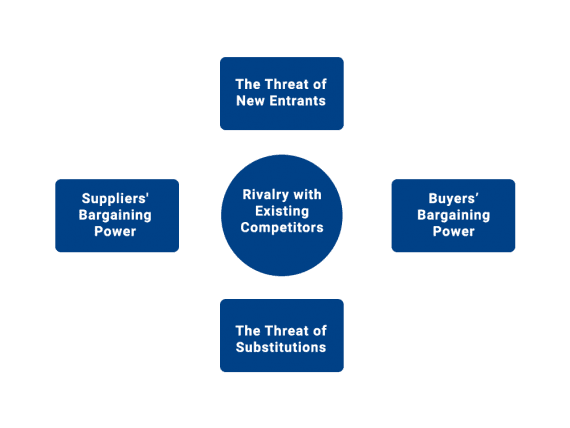 Porter’s five forces help us think about the competitive structure of an industry and its profit potential.

Direct rivals. Rivalry among companies is what we normally think of as competition, “including price discounting, new product introductions, advertising campaigns, and service improvements. High rivalry limits the profitability of an industry. The degree to which rivalry drives down an industry’s profit potential depends, first, on the intensity with which companies compete and, second, on the basis on which they compete,” wrote Porter in his 2008 article.

Industries with companies that compete on price alone will have much less profit potential, limiting the chances of success.

Porter describes many ways to analyze rivals. The takeaway for new consumer brands is to understand how rivals compete now and what differentiates one from another.

As Porter wrote, buyers “can capture more value by forcing down prices, demanding better quality or more service (thereby driving up costs), and generally playing industry participants off against one another, all at the expense of industry profitability. Buyers are powerful if they have negotiated leverage relative to industry participants, especially if they are price-sensitive, using their clout primarily to pressure price reductions.”

Thus brands should understand why buyers are interested in the industry’s products. The “Jobs to be Done” framework is useful for this purpose.

Suppliers’ bargaining power. In a sense, suppliers are similar to buyers in the five forces model. Given a choice, suppliers would have your business pay more and receive less.

Suppliers are powerful in an industry when the thing they are providing is difficult to replace. For example, in the supplements and cosmetics industries, contract manufacturers often try to own the formulas. In these cases, it would be difficult for a supplier to control the availability and cost of goods.

Threat of new entrants. When developing a consumer product, it is important to understand the barriers to entry — how easy it might be to introduce a similar item.

“New entrants to an industry bring new capacity and a desire to gain market share that puts pressure on prices, costs, and the rate of investment necessary to compete. Particularly when new entrants are diversifying from other markets, they can leverage existing capabilities and cash flows to shake up the competition, as Pepsi did when it entered the bottled water industry, Microsoft did when it began to offer internet browsers, and Apple did when it entered the music distribution business,” Porter wrote.

Brands developing products for the Amazon marketplace could be particularly vulnerable to this competitive force. Many affordable tools identify product gaps on Amazon. Thus a consumer brand that identifies an opportunity on Amazon should assess the impact of new entrants on profitability and viability.

Threat of substitutions. “Substitutes are always present, but they are easy to overlook because they may appear to be very different from the industry’s product: To someone searching for a Father’s Day gift, neckties and power tools may be substitutes,” Porter wrote.

Substitutes can come from just about any industry. So when considering a consumer product, understand what a replacement could be and how to compete against it.

Consumer brands can apply Porter’s five forces when creating a product strategy. Brands can combine the model with other tools, including the SOSTAC® planning framework or the concepts in a Blue Ocean Strategy.