One of the most the most useful ways we can segment non-profit donors is by generation. Different generations, as a whole, have different giving patterns. Non-profit marketers should be able to build successful contribution campaigns based on generational giving characteristics. Here are some of the main facts about the generations — summarized in the illustration below. 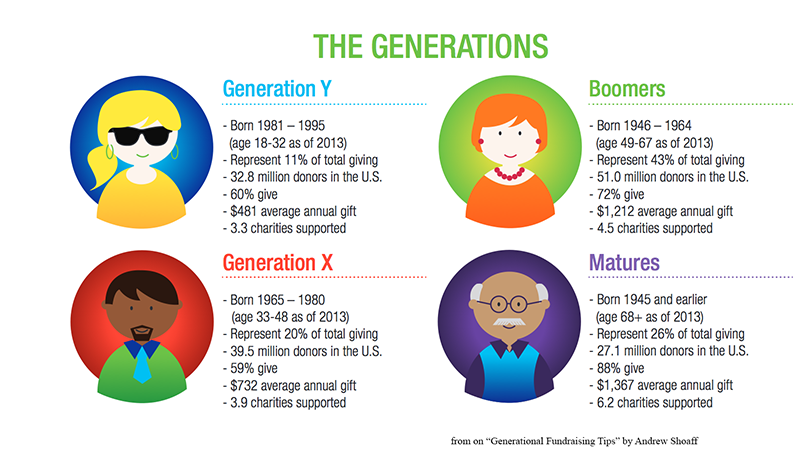 Generation Y, Generation X, Boomers, and Matures all participate in non-profit giving, but to varying degrees.

Boomers Give the Most

As a group, (Baby) Boomers give the most, representing 43 percent of total charitable giving. Although the average annual gift, $1,212, is slightly less than the average annual gift, $1,367, of Matures, more of them give (51 million Boomers vs. 27 million Matures). The Boomers, followed closely by Matures, are the groups that non-profits should target as most likely to give now and to give generously. These two groups also represent our most likely candidates for major donors.

There may be generous donors among Generation X, but this group is likely to have higher living expenses and less income for charitable giving. Among Gen X, more of them give than Matures, but this represents only 59 percent of the total group, whereas 88 percent of Matures gives. Also, the average Gen X gift, $732, is only slightly more than half the average Mature gift. If Gen Xers could be persuaded to increase their average gifts, they could become a powerful philanthropic force.

That brings us to Gen Y, another potentially large group, which falls far short of its philanthropic potential. Their average gifts are small, only $481. Sixty-percent of them give, however, about as many as Gen X (59 percent), but less than Boomers (72 percent). 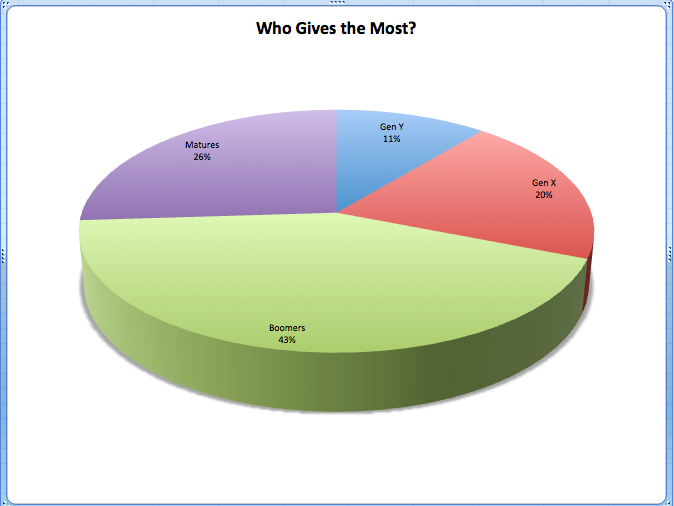 Generation Y people may not give much now, but they have great potential. As Boomers and Matures age and inevitably die, we must rely on Gen Yers to eventually replace them in the donor pool or many charitable organizations will fail. They have not been raised, as a group, with the philanthropic outlook as Boomers and Matures. Their expectations of non-profit organizations, especially their technical expectations, are far different. We must begin to cultivate them as donors now, and adjust our organizations to fit their giving patterns.

The Pew Research Center’s Internet & American Life Project has been working on a series about the “Millennials,” another term for Generation Y. In “The Millennials: A Portrait of Generation Next,” Pew reports that “two-thirds of teen internet users … are online every day while 36% of teens go online several times a day.” The research also reveals that Gen Yers want to know what their friends are donating to; they need that personal connection and they want to talk about with their friends.

You can find a lot of advice on the Internet about engaging Generation Y. Here’s a summary of the best of the best. FirstGiving.com recommends just three simple steps.

Experiment to discover what works best to attract your particular Gen Y audience. Here are the top three things to remember.