The use of videos as an Internet marketing tool continues to increase as law firms of all shapes and sizes are finding that there are significant benefits to “going Hollywood.” The reasons for using video are numerous — from both a search engine optimization and end-user perspective.

Early video usage on law firm websites amounted more to adding bells and whistles than providing any real value. For firms that engaged in television advertising, it certainly made sense to make those available online. Many firms liked to have a welcome message from the managing partner — usually poorly produced, stilted, and sleepy. Later, it became trendy for careers sections to feature slick productions to attract prospective summer associates and young lawyers.

Two sites started to change the value and importance of videos as an effective marketing tool. First is the growth of YouTube into a powerful search engine that’s now owned by Google. That combination started giving increased significance to video as a better form of content than the written word. The second site is Facebook, which has led to social media as a mass distributor of video — and a natural tie to networks and possible prospects. These two elements — increased SEO and visibility through social media — have made video all the more important.

A visit to YouTube will provide you with a plethora of lawyer and law-related videos that run the gamut from bankruptcy law, real estate, divorce and DUI to mergers and acquisitions, tax law, and commercial litigation. Quality and usefulness range from outstanding lectures to replays of TV commercials. Video is an alternative to reading another web page. It also goes well beyond direct new client or matter generation to cover areas of media relations, client retention, careers and hiring, branding and firm messaging.

“Since the awards were developed, many more law firms, large and small, have begun using videos or exploring how to incorporate them into their marketing mix,” according to Nicholas Gaffney, a partner in Infinite Public Relations and director of the Law Practice Management Law Video Awards. “Law firms are producing videos themselves as well as hiring outside vendors. There is a belief, which I agree with, that in the competitive market for selling legal services that video can help firms distinguish themselves from others. In the near future every law firm website will have some type of video.” 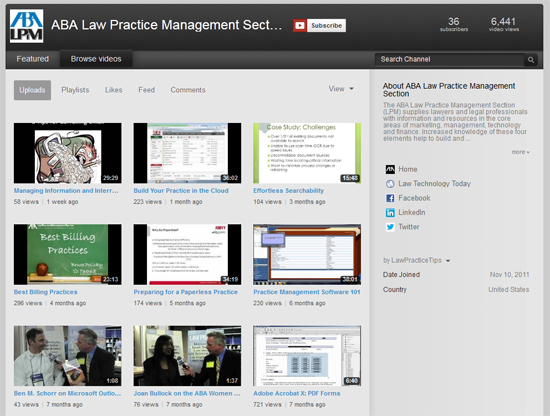 View the winners on YouTube from the ABA’s first Golden Gavel awards honoring the best in law-firm-produced videos.

Infinite Public Relations, a professional services and litigation crisis PR firm, is among many consultants and companies that have incorporated online videos into a law firm’s visibility plan, whether in marketing, business development or public relations efforts.

Besides developing your own videos for use on a website or YouTube channel, there are sites devoted to the law and video such as TheLaw.tv, which combines online marketing with television station promotion to drive prospective clients to a law firm.

“Video on a website helps to drive conversion by conveying the knowledge and personality of the lawyer,” according to Brian Albert, founder and developer of TheLaw.tv. “At the same time, it helps with search engine performance on the law firm’s website. “Video pages perform well on Google. They also keep the user on the site longer, which helps to improve the website’s bounce rate (a key metric in most search engine algorithms).”

TheLaw.tv amounts to a hybrid of lawyer directory and legal information site. TheLaw.tv sites are developed in partnership with local television stations to cross-promote through the Internet and television. It also highlights the concept of developing videos that end up being placed into multiple platforms.

“More and more people are sourcing professional services on sites like Facebook and Twitter, where they rely on their social networks to provide recommendations or they may be exposed to a firm because one of their social connections Liked or mentioned that firm,” said Albert. TheLaw.tv edits and produces the law firm videos — in the form of short, web-friendly questions and answers that provide legal information as opposed to simply airing a commercial. In tying videos to sites such as Avvo and LinkedIn, one video provides numerous opportunities for exposure.

Not Your Father’s Webinar

Hundreds of law firms provide legal updates in the form of online newsletters and alerts. Many have moved to various webinar formats with mixed results. Often, the quality of presentation lacked flair. In other words, it was often grainy, with herky-jerky delivery, poor sound and staging, and boring. In “going to the videotape” rather than streaming live, the format becomes better in regard to sight, sound, and graphics.

Richards, Layton & Finger, one of Delaware’s largest law firms, sought to improve delivery of important corporate law case updates by moving to a pre-produced, professionally taped video format. The end result is a webinar that is still timely, but provides a better viewing experience for the lawyer in New York seeking an update on Delaware corporate law. By using professionally produced video as a delivery mechanism, they have high quality website content, provide a better end user experience, and differentiate themselves in a market crowded with similar programming. 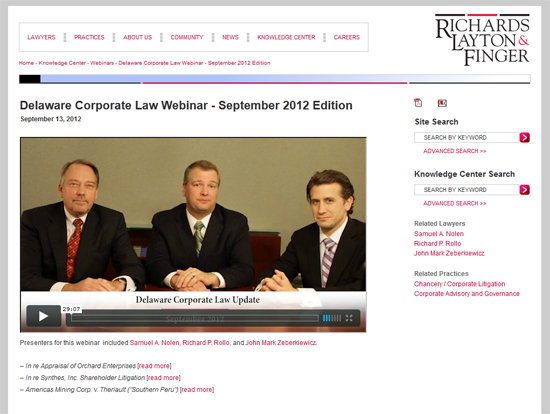 A look at the winners of the aforementioned Golden Gavels shows, among other things, a sense of humor. Online videos that go viral are more likely engaging in a humorous way than in delivery of straight facts. Of course, lawyers messing with humor can be combustible.

California law firm Allen Matkins, a huge user of online video, erred when its “Call Me Maybe” parody was ridiculed by a major law information website. The attempt to be cute backfired. Not everyone is Norman Lear or Trey Parker. I personally liked the Miami Dolphins cheerleaders lip sync better — along with another 16 million-plus viewers — but the lawyer version just does not work. Allen Matkins’ video has about 8,000 views, mostly generated by bad publicity, if indeed there is such a thing. 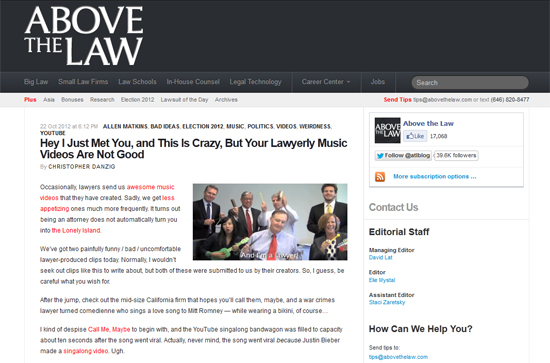 Above the Law review of Allen Matkins singing Carly Rae.

I know this sort of pain first hand. In the video “Midsize is the new big,” I wrote the script for this Hollywood produced video designed for recruiting purposes. The edgy, out of the box content proved to be too much for the midsize law firm client. It never saw the light of day for its intended purpose. Reviews were mixed. This includes the same site that hated the Allen Matkins’ version of Carly Rae Jepsen. I still love it. A byproduct of being edgy or different means that you won’t get universal acceptance. But a video on trust and estate law likely is not going to generate any buzz.

Video May Have Killed the Radio Star, but not the Internet

The bottom line is that the use of video enhances the end-user experience for the Internet user, while increasing visibility and searchability for the law firm. But it does not replace the web and its many features and categories of content. The use of video for attorneys is for everyone. How you might choose to engage will vary by audience.