Net Promoter Score Is the Best KPI for Ecommerce Growth

Fred Reichheld of Bain & Company, in conjunction with research firm Satmetrix, developed (and trademarked) the Net Promoter Score concept in the early 2000s, introducing it in a now-famous Harvard Business Review article, “The One Number You Need to Grow,” published in December 2003.

The article compared data from thousands of customer satisfaction surveys with transactional information to identify a key performance indicator for profitable growth.

According to Reichheld and many of the Net Promoter Score’s supporters, the best growth KPI is understanding how likely a consumer is to recommend a business to a friend.

To this end, Net Promoter Score begins with one question.

How likely would you recommend our [company, product, or service] to a friend or colleague?

The answers are measured on a scale of zero to 10. A zero represents “very unlikely” (or “not at all likely”). A 10 is “extremely likely.”

Respondents are divided into three categories.

Net Promoter Score starts with a single question about how likely a consumer is to refer a business. This question is answered on a scale of zero to 10.

Think about the correlation between growth and a willingness to recommend a business, product, or service and growth.

Promoters will spread goodwill about a company via word of mouth. They will encourage others to buy even when they are not buying for themselves. A Detractor does just the opposite, discouraging sales via word of mouth.

“The only path to profitable growth,” Reichheld wrote, “may lie in a company’s ability to get its loyal customers to become, in effect, its marketing department.” 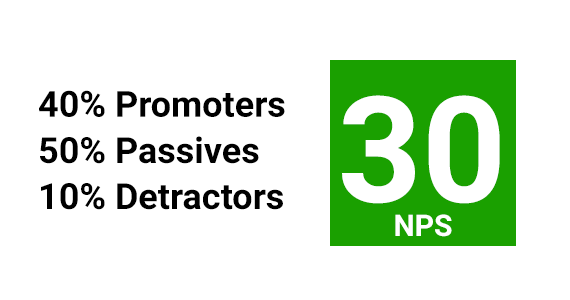 The Net Promoter Score is sensitive to the volume of respondents. So how often an ecommerce business measures it will depend on how many survey responses can be collected.

After asking the referral question, follow up with an open-ended question to uncover why a consumer responded as he did.

This question can generally be asked to all respondents with something like “What is the most important reason for your score?” or “How do you feel about your shopping experience?”

It can also be asked for each category. Thus a Promoter might receive a question about what made the experience great, while a Detractor might be asked about what led to his poor experience.

This follow-up question can be asked at the same time as the referral question, or later. The aim is not just to give a business a KPI, but to also give it actionable information.

In a paper on Net Promoter Score, Retently suggested using what your business learns from the Net Promoter follow-up question to wow Detractors, engage Passives, and show gratitude to Promoters.

Focus your efforts initially on Passives. These are satisfied shoppers. If your company can turn them into Promoters, you will be fueling growth.

Consider sending these folks a follow-up email asking what can be done to make them more likely to recommend your company. Retently also suggested offering Passives special offers, discounts, or upgrades.

Next, encourage your company’s Promoters. Send a thank you email. Tell them how important they are to your company and how much you value their recommendations. Include free gifts, such as a t-shirt or a hat. Also offer Promoters unexpected benefits, such as an automatic upgrade to free, two-day shipping.

Finally, reach out to Detractors. Ask follow-up questions and consider the answers. Detractors, according to Reichheld, are a real danger to your business if they remain dissatisfied.