The Next Generation of Ecommerce Management

Ecommerce is disruptive. It has changed the way millions of people shop. But the management of many ecommerce businesses has not evolved. It often operates, seemingly, as an old-world dictatorship or a fiefdom.

Managing a business, especially in an industry as dynamic as ecommerce, can be stressful. It requires strategy, vision, and day-to-day, if not minute-to-minute, decisions.

Ecommerce managers have to keep up with trends in technology, marketing, products, customer service, and small-package shipping. These same leaders can also manage employee, supplier, and customer relationships. The burden can be crushing, especially as companies grow from being a startup into the mid-market.

Too many ecommerce companies don’t understand that there are more ways than one to run a business or define a management structure. It does not necessarily involve a strict hierarchy and static job descriptions. In fact, those approaches might be harming your business and its ability to grow.

What follows are several ideas to organize and manage an ecommerce business in 2018 and beyond. Some of these are concepts may seem revolutionary. But, then again, so is ecommerce. 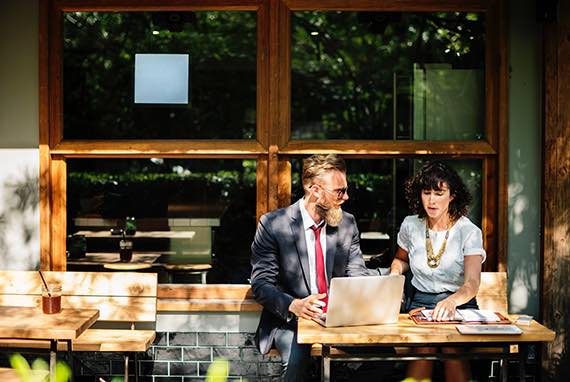 Perhaps the most radical suggestion on this list is Holacracy, which is a method for running purposeful, responsive, and self-managed companies.

Holacracy’s inventor, Brian J. Robertson, suggested in a Future Work podcast that if you wanted to understand Holacracy, you should think about how cities are organized.

“Look at the inner workings of how companies are structured. It looks like a feudal empire,” Robertson said. “There [are] kings and lords and barons and peasants, and that is really how [they are] structured. It is broken down in a feudal-like hierarchy with very fuzzy boundaries over who can tell what to whom.”

“When we look at a modern city, it looks very different. It is not a feudal empire at all. It is actually a whole bunch of people each with their own kind of property and territory and their house and their stuff — all cooperating in different ways within a framework of rules.

“So order isn’t imposed top-down by a king telling peasants what to do…instead order is emergent from a framework of rules and free actors within that framework to go do whatever makes sense to them — to do their work in the world — and that method, that mode of organizing, has some pretty awesome results.

“When you look at a modern city…when cities double in size the productivity per resident goes up…. But in a company, it is exactly the opposite. When companies double in size, you get more bureaucracy, more waste, and everything slows down.”

Holacracy is about making workplaces act more like successful, growing cities. That is the case for Zappos, which used Holacracy to become a well-respected leader in ecommerce.

If you’re frustrated with how your business is operating, consider Holacracy.

Ecommerce organizations compete with software. An online seller might be beating its competition because of its technology. This is probably the case at the moment for merchants that have adopted progressive web apps, HTTP/2, and even Gzip compression.

Given this emphasis, consider an everyone -codes or almost-everyone-codes requirement for employees.

An understanding of how web technologies work and what it might take to add a feature should help employees make better decisions or even set better goals.

Similar to an everyone-codes policy, some ecommerce operations may consider an everyone-is-in-customer-service approach.

For example, imagine an ecommerce business that offers live chat services to its shoppers. Maybe every employee, from the CEO to the search optimizer, has to take a turn on chat, answering questions and concerns from consumers.

That exercise may help folks in key roles better understand how to serve consumers. It could help these key employees identify significant stumbling blocks for shoppers that, if removed, would significantly improve sales.

It can be difficult, in some cases, to manage remote workers. The payoff, however, is well worth the effort.

Imagine that your business is hiring an experienced director of marketing. The best candidate, the person with the just-right mix of experience and interest, might not be located in the same city as your company.

This ideal candidate is probably at least mid-career and has significant ties to her community. She is not likely going to move for your business. But she might be willing to work for your company from her location.

Your company will need to decide if it is more important to ensure that everyone is in the same location or to ensure you hire the best people for the job.