Retailers (including Amazon) Crack Down on Return Fraud

Ecommerce customers value a lenient and free return process. The most successful online and omnichannel merchants have been willing to accommodate those wishes. Until recently.

A survey by the National Retail Federation estimated that retail return fraud costs all merchants as much as $15 billion in 2017. An example is “wardrobing” or “free renting,” wherein consumers purchase an item, use it, and then return it. Other cases involve returning stolen goods for cash.

Retailers want to rein in returns, especially when they believe that participants are committing fraud. As a consequence, both ecommerce and brick-and-mortar retailers are tightening their return policies.

Over the past four months, Amazon has started cracking down on what it perceives as an excessive number of returns. As first reported by The Wall Street Journal, Amazon is closing the accounts of some shoppers for returning too many items, although customers are not always given a reason for their banishment. Several shoppers have expressed their displeasure on Twitter and Facebook.

Sometimes Amazon does provide a warning before banning customers. 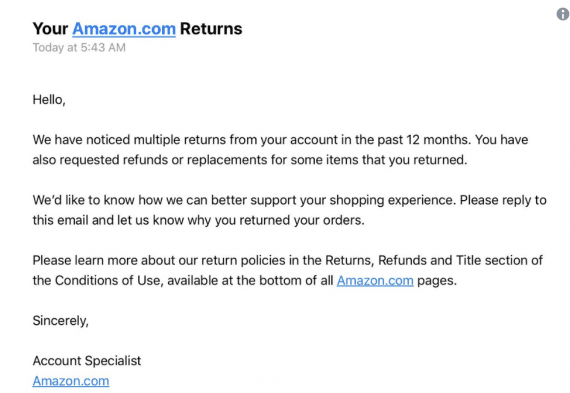 An example of a warning email from Amazon to a customer who has returned products.

Prime subscribers buy and return the most items and are therefore more likely to be banned. Amazon uses an in-house algorithm to pinpoint accounts with a large number of returns. Banning is not automatic; an employee decides whether to expel a customer. Amazon also considers the shipping costs of returns because it absorbs those costs for items that it fulfills.

Returns from online purchases are roughly three times those from brick-and-mortar, with apparel having the highest rate of return. As more people spend more and shop more frequently online, returns are likely to increase.

Jet.com offers a lower price if the consumer opts out of the free return policy. Stitch Fix, which sends five items of curated clothing, shoes, and accessories to customers on a recurring basis, has a business model that anticipates a high volume of free returns. It offers customers the option to keep all five items in their shipment and earn an additional 25 percent off the purchase price. The company also charges a $20 non-refundable styling fee but the fee converts to a credit for anything the customer keeps.

When Amazon started banning customers because of return abuse, some analysts predicted that brick-and-mortar retailers would benefit. However, that does not seem to be the case. At brick-and-mortar stores, shoplifting accounted for 68.3 percent of return fraud in 2017, according to the National Retail Federation.

Appriss Retail’s software flags behaviors such as too many returns in a certain period and returns without receipts. If a pattern of behavior is judged to be fraudulent according to the algorithm, shoppers could be banned.

Retailers are also imposing limits on the monetary amount of merchandise customers can return. Each retailer can set parameters.

A retailer will scan the original purchase receipt and will also swipe or scan the individual’s driver’s license or government-issued ID card…. ID collection is performed in order to make an accurate identification of the person and his/her unique return behavior. As you return merchandise, the system compares variables such as your return frequency, dollar amounts, and/or time against a set of prescribed rules that form that particular retailer’s return policy.

Other means of restricting returned items include:

An increasing number of goods purchased online are being returned to physical stores. Known as BORIS — buy online return in store — this method accounted for 10.7 percent of returns in 2017 according to the National Retail Federation survey. Returning goods purchased online to physical stores is a service of omnichannel vendors. To compete, Amazon has made arrangements with Kohl’s to accept items purchased from Amazon. The program is active in Chicago and Los Angeles with plans to extend nationwide.

Amazon controls so much of ecommerce it can set the tone for online policies and practices. Tightening its return policies will allow other online merchants to apply stricter practices as well. As online sales grow, the cost of returns is becoming too big for some merchants to absorb.