Algorithm changes typically center on rankings improvements tied to determining the quality of a site’s contextual relevance or authority within its topic or industry. A broad core change like this one indicates that Google has done more than its typical tinkering that results in one to two small algorithm updates a day on average. It has changed something larger in the core of the algorithm that impacts a wider array of rankings.

The impact of those changes can be viewed in the tools such as SEMrush’s Sensor, which tracks aggregate rankings across thousands of keyword phrases to measure Google and Bing’s daily fluctuations. 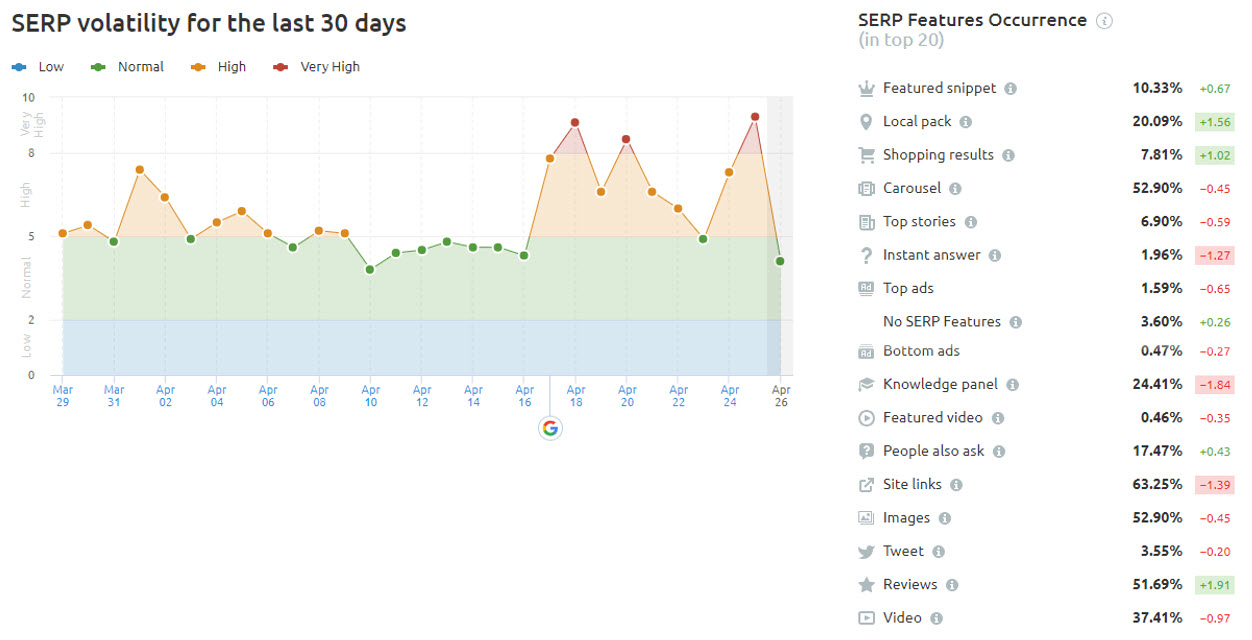 The algorithm update, according to the announcement on Twitter by Google SearchLiaison, focuses on rewarding previously under-ranking sites. Naturally, the announcement explains, this means that sites that had previously been ranking well may be pushed a little lower on the search results page. This is based not on punishing those who rank poorer now, but on rewarding those who deserve it more, in Google’s estimation.

That’s cold comfort, however, for those who find themselves ranking further down page one of Google’s search results or pushed to page two.

Google used to disclose the nature of its algorithm updates. Those days are over. In fact, Google rarely even acknowledges that an update has happened anymore. The acknowledgment, in this case, is a nod to the scope of the change.

In some instances, such as during the damage control several years around the wide-ranging impact of the Panda and Penguin updates, Google has also indicated the percent of search results that were impacted. Unfortunately, Google has also stopped giving that information.

What we can tell is that the algorithm update caused a larger than average change to the rankings trends in several of the major trackers, including SEMrush’s Sensor, as shown above, Moz’s Weather Report, and SERPmetrics’ Flux report.

In addition, we can also presume that the update centers on site quality, as have the sweeping updates have in the past. It’s also possible that the update is centered on one of the initiatives that Google is pushing now, such as site speed, security, or structured data.

It’s unlikely that the change is an unexpected incident related to the mobile-first index, though, since Google has been more forthcoming about that topic.

The only question that matters to most digital marketers is whether the algorithm update impacted their site’s organic search performance. The answer can be found in two places: rank tracking and web analytics.

Since it speaks to your bottom line most directly, start with web analytics. Did your site experience a natural search performance change in visits sourced from Google on or slightly after April 16, 2018, the date of the update?

If “yes,” did you, by coincidence, launch any technical releases, modifications to the navigational structure, or major content updates at that time?

If the answer to that second question is “no,” then you probably were affected by the algorithm update.

As Google pointed out, there is no “fix” for this update. If you didn’t do anything wrong for which you’re being punished, then you can’t gear your search engine optimization strategy to fix anything specific. That’s what’s so maddening about the new era of Google’s algorithm updates.

How, then, can you do more of what’s being rewarded so that you can reclaim your rankings positions and organic search traffic?

Do the right things right.

That’s a pretty broad canvas, since “doing SEO right” includes optimizing everything from user experience to on-page copy and how it’s coded, and from data taxonomy to content marketing. Search engine optimization even extends to the operational processes that an organization uses to interface between teams to create and publish to external web presence.

And none of that is helpful for immediate results.

In fact, chasing algorithms and the competition is like playing defense. If you “win” at the defensive game, you’re still only barely keeping up. Instead, consider how to go on the offensive.

To answer these questions, you’ll need to know your customers — their demographics, psychographics, online behavior, and behavior on your site.

And you’ll need access to your web analytics data. If you don’t have the ability to track performance by channel, push hard for it now. You can’t optimize without knowing where you’re starting.