Thanks to a special sneak preview of The Internship last night — hosted by the Dallas/Fort Worth Search Engine Marketing Association — I was able to view the new film that was set at Google’s headquarters in Silicon Valley, a.k.a. the “Googleplex.” I was particularly interested to see whether the film revealed anything new or noteworthy about Google from an Internet marketing perspective. 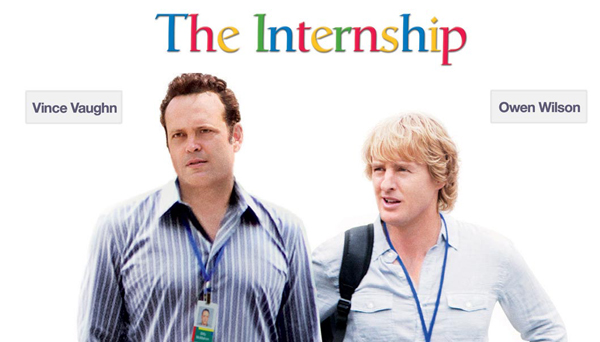 The Internship is a new film starring Vince Vaughn and Owen Wilson about Google interns.

In the film, two salesmen from a watch company, Billy McMahon and Nick Campbell — played by Vince Vaughn and Owen Wilson — are left unemployed when the watch company they worked for abruptly went out of business, apparently obviated by people switching to look at their cell phones to tell time instead of looking at watches. Feeling inadequate for the contemporary job market due to a lack of skills, they hit upon the novel idea that working for Google as interns would help them develop marketable skills, and could perhaps segue into jobs with a good, robust company.

The film depends heavily on the comedy supplied by the mismatch of forty-something men getting accepted into Google’s highly competitive intern program with a pack of smart, college-age kids. The two salesmen are older — read “out of touch with latest online trends” — world-weary, street smart, and extroverted. The interns around them are young, immersed in geek culture, high-IQ “gifted program” students, and introverted.

The overall storyline is predictable — in fact, it’s a bit like the plot of an old John Hughes movie from the eighties: a couple of outsiders are inserted into a microcosm, they encounter distrust and ill treatment initially from everyone — particularly from a few mean-spirited people, they win over the hearts of a few good-character people, they struggle against great odds in some competition, they ultimately pull out a victory through hard work and determination, and they also find some love interests along the way.

From an Internet marketing perspective, there were many things that were interesting and entertaining about the film. It was apparently made with a great deal of cooperation from Google, to the point where Danny Sullivan of Search Engine Land refers to it as “a beautiful Google commercial.” Indeed, it is — the film segments include shots from around Google’s headquarters and highlights some of the things the place has long been known for, such as free food from various internal eateries, people riding Google-supplied bikes around the company’s Mountain View, California campus, and playing volleyball in the courtyard between the buildings. I’ve visited the Googleplex a number of times and eaten in their cafes, and the representation is absolutely accurate. I was surprised, however, to learn that some portions of The Internship were filmed at Georgia Tech in Atlanta. The playfulness of Google facilities has been widely reported-on in the past, and everything about their buildings and grounds in the film rang true compared with my visits to their properties in the past. 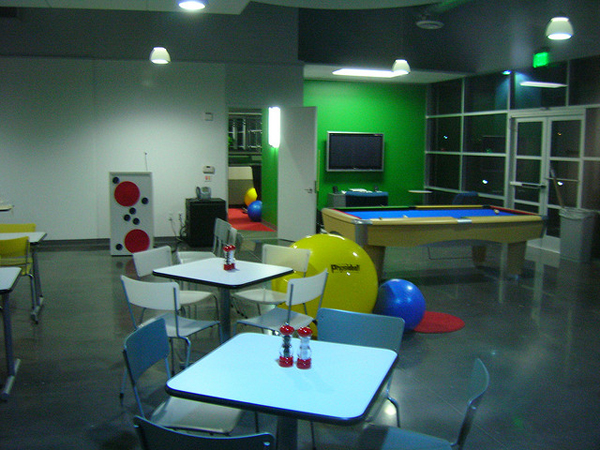 Google must’ve exercised some considerable degree of influence over how it was portrayed in the film, because the company was presented in only the most positive of ways — to the point where many other reviewers are saying that “Google takes on an Oz-like status” in the film or that “Google stands in for the Emerald City.” The film does show the idyllic environment that the company has endeavored to embody — empowered people, from varied backgrounds collaborating together in a beautiful and fun place to create the best search engine and innovative products. Almost from inception, Google has tried to create a lighthearted workplace, and in the past the facility was sometimes jokingly referred-to as “daycare for IT workers.”

Google has a lot of focus around intangibles associated with their corporate culture, and the movie touched upon a number of these. The concept of being “Googley” was even a small plot point, although it wasn’t defined all that completely — the importance of diversity in hiring, desiring “out-of-the-box” thinking and approaches, ethics, and fostering a creative workplace — the toys that are so iconic in making the place “Oz-like” — were some of the highlights. Yet, if you have read John Battelle’s The Search, you’ll know that Google founders Sergey Brin and Larry Page were, early on, borderline obsessive about preserving their unique, collegial culture, and hiring top-quality candidates.

Years have passed since the early days in the company, and Google’s intern programs are somewhat exceptions to this rule. But, there were still some vestiges of these hiring goals found in the movie plot. The interns were selected by committee vote, assigned to different Google managers to be mentored, and were encouraged to seek out other employees to learn things from on their own. Owen Wilson’s character does this in order to try to date a female employee, and just happens to learn some HTML 5 along the way.

What doesn’t seem to be represented is Google’s “Don’t Be Evil” philosophy, although it’s perhaps alluded-to by the fact that the bullying, witheringly insulting overachiever intern character is ultimately unsuccessful, compared with the friendlier pair of old salesmen interns. They get a job out of the intern experience, while the bully does not.

Unfortunately, while Google has been renowned for some innovative hiring programs, including deploying a string of mind-bending puzzles to solve in order to get jobs as well as the more conventional method of bringing interns in to select and harvest as future employees, one has to suppose that candidates must first solve the questions in order to qualify for initial entry — Google not only wants innovative thinkers and nice people who play well on teams, but people who can actually get things right. So, scenes where the two main characters are attempting to solve one of their team’s challenges of debugging a program that has two million lines of code by trying to first find the programmer and persuade him to tell them what was wrong seems too preposterous to believe. 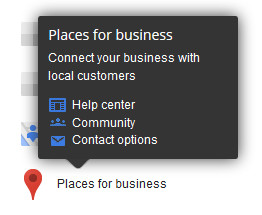 Contact information for Google Places does not include phone support.

From an Internet marketing viewpoint, the most unbelievable, fictional piece of the film is the intern challenge to man the “Google Help Line,” a telephone support line. The interns are expected to learn enough about a set of Google products to be able to help troubleshoot and solve real Google users’ problems when they call into a support center. While the IT support center is a mainstay of a great many technology companies, it’s not at all a part of Google, which has always rather obstinately refused to create a phone help support line, insisting that users read help pages or submit questions to online group forums where intermittently Googlers might answer a question directly, but the majority of queries are answered by other general members of the community. For instance, if you have a business listing in Google Places and something is wrong with it, Google’s help section tantalizingly offers a link for “Contact options,” but it only links to help pages to read and to the community forum. Google’s advertising product, AdWords, offers a phone help line, but I believe that’s the only part of Google that does — none of the other products, such as Chrome or anything mentioned in The Internship have any sort of tech support.

Phone Support is available for Google AdWords only.

The worst parts of the film seemed fairly misogynistic and may be offensive to women. Perhaps trying to exploit some of the sorts of humor that Vaughn and Wilson used successfully in The Wedding Crashers, their two sales characters take their intern team out on the town to decompress and build camaraderie. They end up going to a strip club in a series of scenes that seem out of place in the film, and not very believable. Vaughn was earlier quoted as saying about the film, “It’s fun to go back and do some R-rated comedies again.” Perhaps these scenes were intended to provide the main R-rated material, although the film is only PG-13. I’m wondering if there were some R-rated scenes that may have been edited out. The shots and humor around the lap dances were pretty inappropriate, and the interns became extremely drunk, calling into question whether their programmer could have realistically built the mobile app their team needed that same night for their project. While the club scenes happened away from Google, one feels a bit concerned that the interns’ behavior around that evening could have easily become a firing offense — pure nightmare fuel for any HR professionals who might see the film — and probably not a good portrayal of the intern program.

From a search engine marketing perspective, the biggest omission was material around Google’s most important asset — the search engine. It is surprising there wasn’t more discussion around it, or some glimpses at all the moving parts and processes behind making it work. No armies of server machines, chugging away in the background, nor explanation of the famous PageRank algorithm, nor display of ranks of cubicles where real live humans must work every day at auditing and ranking search results or policing for spam. It’s as though the biggest, most-important part of Google was completely invisible. This was the most Oz-like part of the movie for me — ignore that man behind the curtain with all the machinery and instead focus only on the face of the Google search form.

In all, it’s a superficial film with an extremely predictable plot. It’s entertaining for that, with a few comedic moments sprinkled throughout that are entertaining. From an Internet marketer’s point of view, the film will be disappointing if you hoped to learn any of the “secret sauce” that goes on behind the scenes. If you’ve read up on Google over the years, there won’t be any new revelations. The intern program and team projects seem mostly believable, but not particularly illuminating. But, if you’re going strictly for the entertainment value, there are enough familiar reference points to make it very enjoyable.