When Is the Best Time to Send an Email?

“When is the best time to send an email?” is one of the most frequently asked questions about email marketing. After all the work of building a list, crafting a message, and designing the email, everybody wants to get the best results possible. Nobody wants to mail at the wrong time.

So when is the best time to send an email? Answers vary. The best course of action is to test and find out.

Many businesses don’t boast a list that big. If you’re in that category, keep reading — I’ll get to your solution in a moment.

How to Test Which Day is Best to Send Email

If you have a big enough list, here is how to test.

Why test three times? So you can balance out any events like holidays and sales that might skew your results. 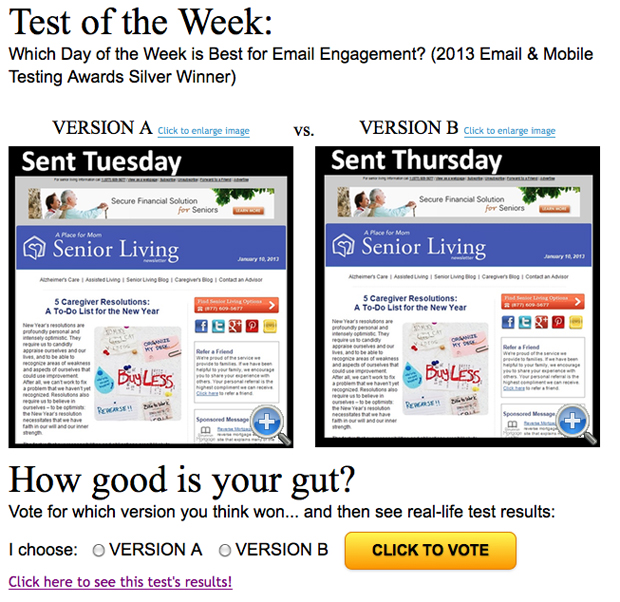 How to Test Which Time is Best to Mail

Once you know which day of the week is best, then you can segment again to find out which time is best. Here’s how:

You can also break your segments into four-hour time spans, and have just six segments. Going with six segments will give you larger sample sizes, and thus you won’t have to test as many times. If your list is on the small side, six segments may work better.

As before, run this test at least three times so you can have a nice body of data to make your decision from.

Your list may also be too small to split up for time zones and three-hour blocks — which would require 24 segments and a list of at least 70,000 names. If your list is smaller, the best you can do may be to ignore time zones and pick a time that works best for the list as a whole. Getting too obsessed about when to send can compromise other optimization projects that might deliver more sales.

Small List Testing, or if Testing is Too Much of a Hassle

If you don’t have the resources or the time to test the best time to mail, the next best thing is to borrow other people’s data. There is a steady stream of reports put out by the email marketing industry that will give you good clues about when to send.  The trouble is, the reports often contradict each other.

Which Day of the Week Gets the Most Responses? 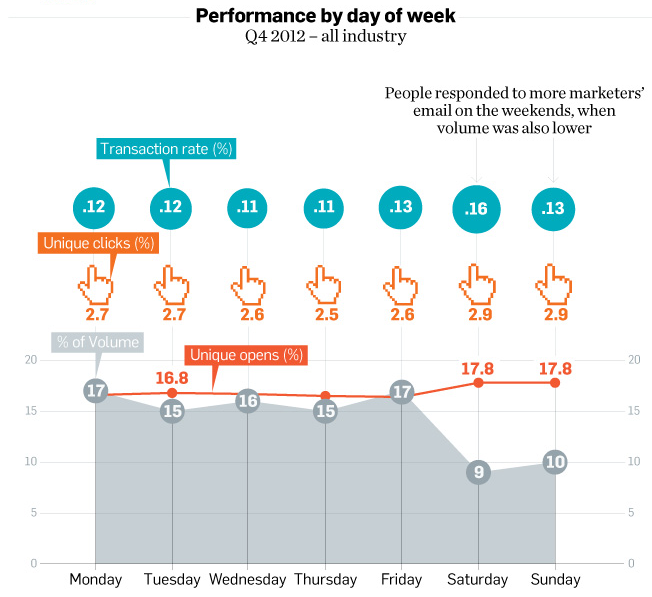 This Experian chart shows Saturday as the best day for optimal “Transaction rate.” Saturday ties with Sunday as best for “Unique clicks” and “Unique opens.” 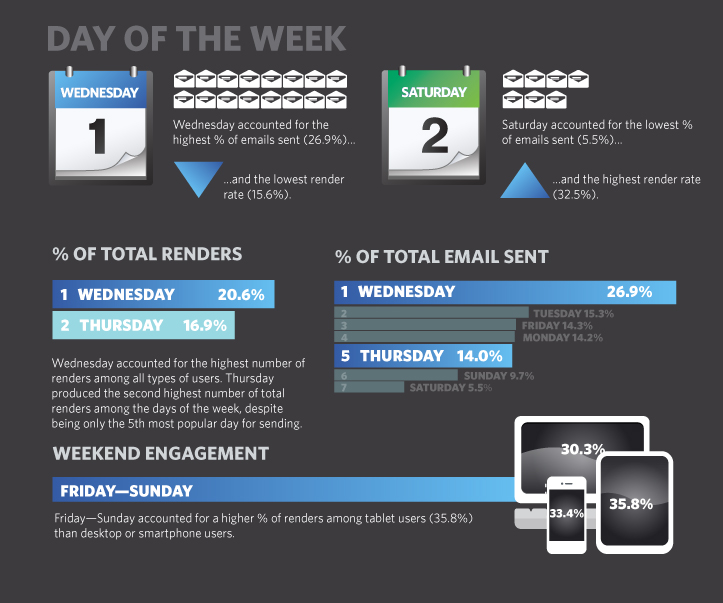 Saturday wins the highest render rate in this graphic from HC Digital.

GetResponse’s research shows Thursday as the best weekday for clickthroughs. 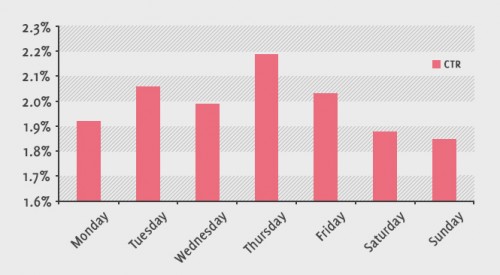 They also give Thursday first prize for open ratio.

Thursday wins for best open rate according to GetResponse.

GetResponse isn’t the only email provider whose data favors Thursdays. MailChimp’s data from its Email Genome project also shows Thursdays as the best performing day for opens. Wednesdays and Tuesdays follow close behind. 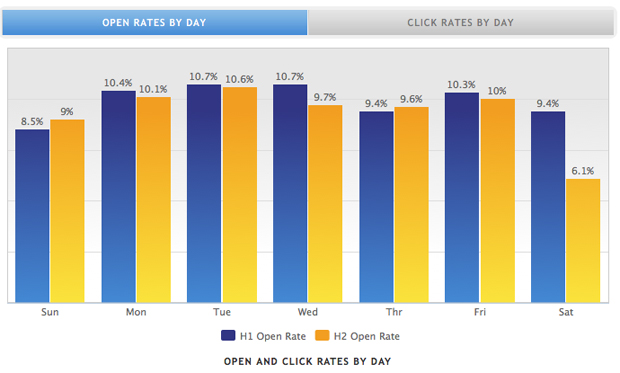 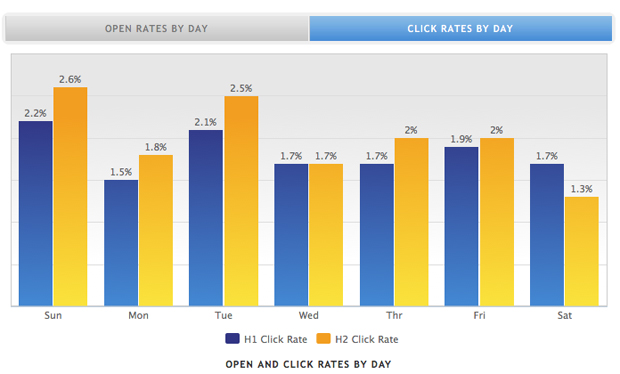 Sundays and Tuesdays win for click-through rate according to MailerMailer.

Unfortunately, the data from these different reports doesn’t line up. Several reports show Saturdays and Thursdays as the strongest days, while others give Sundays, Tuesdays, and Wednesdays high marks. The only clear thing is Mondays and Fridays never come in first place for any metrics.

Which Time of Day is Best?

For time of day, there’s a whole new batch of charts.

Here is GetResponse’s take on what time of day to send. This first graphic shows when emails are sent: 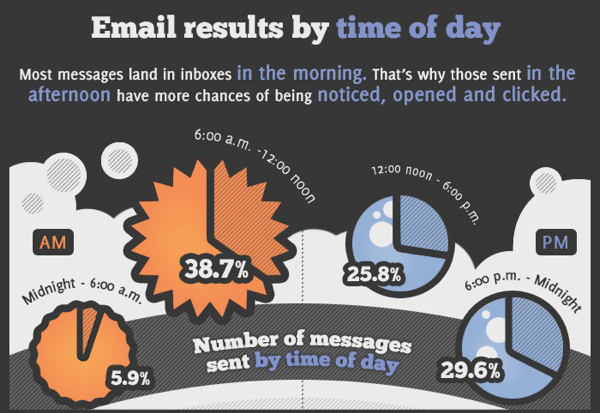 Most emails are mailed out between 6 A.M and noon.

This graphic shows which times get the most results: 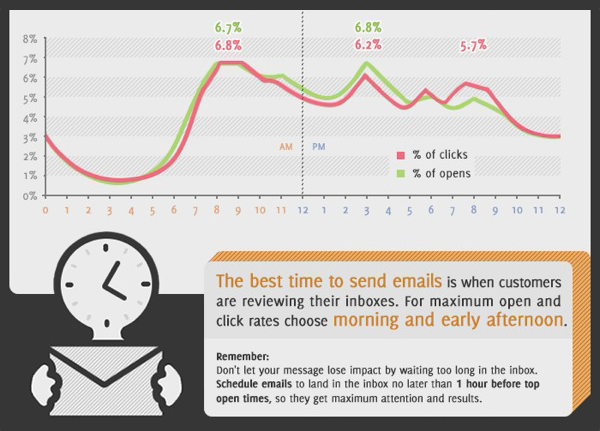 8 p.m. is a top-performing time in another report. Experian’s Email Marketing Q4 2012 Benchmark Study had one section devoted just to best times for highest transaction rate and 8 p.m. won. 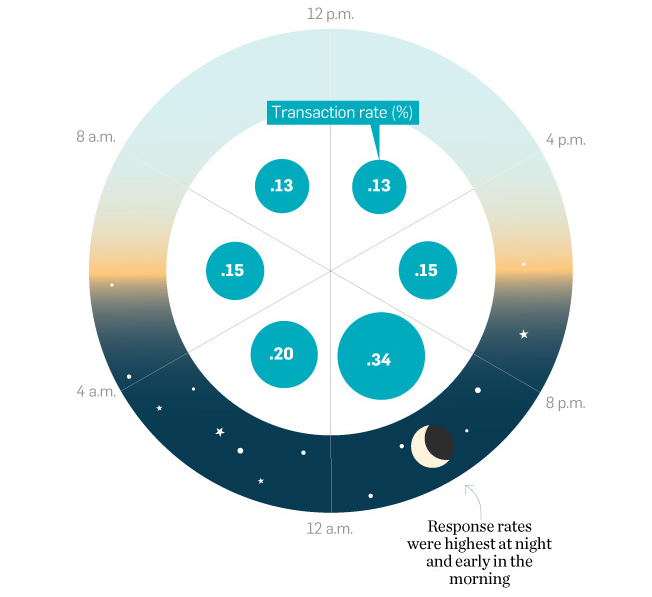 Experian, like GetResponse, also reported that 40 percent of emails are sent between 8 a.m. and noon. So if you want to avoid the inbox jam, don’t mail during this time.

MailChimp’s data also has 8 p.m. performing well, but its data definitely favors afternoon emails over emails sent in the evening, especially if those emails are sent between 1 p.m. and 4 p.m.

MailChimp recommends mailing in the afternoons and early evenings.

So what’s the conclusion here? Only GetResponse shows mornings as one of the best times to mail. All the other reports mentioned here point to afternoon mailings as best. And if you care about making sales, you’ll definitely want to remember Experian’s 8 p.m. to 12 a.m. golden window.

There’s one last way to gauge what time is best to send. It only works if you post to Google+ regularly. If you do, head over to the Google+ Timing tool. Log in to your Google+ account and take a look at Google’s very specific recommendation of when you should post, based on which day of the week and which hours you typically get the most responses from your Google+ posts.

If you don’t post to Google+ but you are active on other social media channels, check your stats to see when your fans and followers are most active. That just might be the perfect time to click “send.” 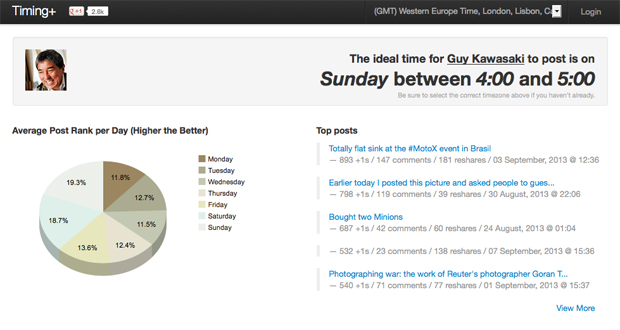