For 20 years I have consulted with ecommerce companies, from startups to established merchants. The one constant during that time is change — nonstop evolution and progress.  This post is the first in a series that will focus on ecommerce innovation.

This installment will address drone delivery.

Many companies are focusing on drone delivery, including Amazon via its Prime Air.

Flirtey launched in 2013 in Australia but is now based in Reno, Nevada. It is a leader in drone delivery in the U.S. in terms of test flights and obtaining government approvals. 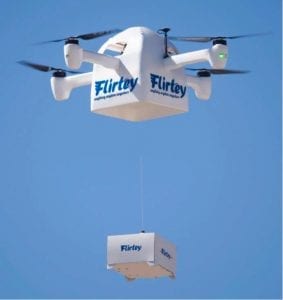 Flirtey made its first Federal-Aviation-Administration-approved drone delivery in July 2016 from a 7-Eleven store in the U.S. to a residence. Since then Domino’s has also become a customer. The company has raised over $16 million in funding.

This month Flirtey launched the Eagle, a drone that can deliver “75 percent of packages” to customers’ homes during last-mile deliveries and operate in “95 percent of wind and weather conditions.” According to Flirtey, the Eagle does not go near humans. Instead, it lowers the delivery box using a tether.

Workhorse is another drone-delivery company that produces electric delivery vehicles for customers such as UPS and FedEx. Workhorse’s Horsefly drone can fly at speeds of 50 mph for 30 minutes. The company’s stock is publicly traded (NASDAQ: WKHS).

The Horsefly drone always stays within line-of-sight of Workhorse’s electric delivery trucks. Nonetheless, the process could save time and money for the delivery of packages. 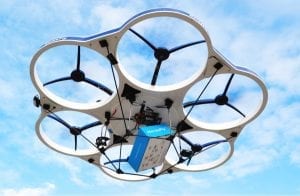 Workhorse’s Horsefly drone can fly up to 50 mph for 30 minutes.

One of the obstacles of online shopping compared to physical stores is the time required to receive products. Drone delivery can change that. Here are some benefits overall.

Drones present challenges, too. Here are a few.

Drones are already used for delivering products in Iceland and delivering medical supplies in Tanzania and Rwanda. Denmark, France, and The Netherlands are soon to follow.

In short, drone delivery is an innovation that could greatly help ecommerce merchants.