On June 4 the International House of Pancakes, or IHOP, tweeted that it was rebranding itself as IHOb. Followers instantly weighed in on the possible meanings of the “b.” Then the company announced the b stood for burgers, and the company introduced a new selection of tasty hamburgers. After all, burgers are the most-ordered entrée in restaurants nationwide. The move quickly drew ire and outcry from followers on social media. In July, the company admitted the hoax, along with a pancake promotion to celebrate the chain’s 60th birthday.

The #ItInTogether campaign from LinkedIn explores why people work. Professionals who don’t fit a white-collar stereotype — including a rancher, a physicist, and an animator — share what drive them and why they’re “in it.” The 12-week integrated campaign was launched with a television spot during the Golden Globes, followed by paid social media, video, radio, podcasts, search engine optimization, and other partnerships, as well as a microsite where employees could explain why they’re in it, too.

Autonomous sensory meridian response — ASMR — is the tingling feeling some people experience when they hear certain sounds. ASMR videos have become popular as viewers seek meditative relaxation. (Since 2011, the videos of Gentle Whispering ASMR received over 550 million views.) In Ikea’s “Oddly Ikea” video, a woman makes a bed and fluffs pillows, creating soothing sounds while whispering about IKEA dorm room solutions. The 25-minute video is a compelling mash-up of promotion and practical content.

Nike’s “Dream Crazy” video, narrated by Colin Kaepernick, asks, “Are your dreams crazy enough?” The video is filled with inspirational stories of athletes who defied all obstacles and shattered expectations. The use of Colin Kaepernick, the former NFL quarterback who famously knelt during the national anthem, has drawn criticism. But the results are clearly successful. The company gained 170,000 Instagram followers and the YouTube spot has over 27.4 million views.

Ahead of National Voter Registration Day on Sept. 25, Levi’s launched the “It’s Your Vote” campaign, which featured a video spot, in-store voter registration booths, and a microsite. As the election drew near, the brand filled its Twitter and Instagram feeds with empowering stories and images of celebrities wearing Levi’s “Vote” t-shirt.

When your driver goes #BeyondFiveStars, share a compliment. Share some love. It only takes a few seconds, but it can go further than you think: https://t.co/CL3JJ9dmUB

Uber began 2018 with the #BeyondFiveStars campaign to thank its drivers. The initial videos and microsite profiled some of its most complimented drivers of 2017, encouraging customers to post positive experiences on Twitter, Facebook, and Instagram, as well as offering compliments in the Uber app. 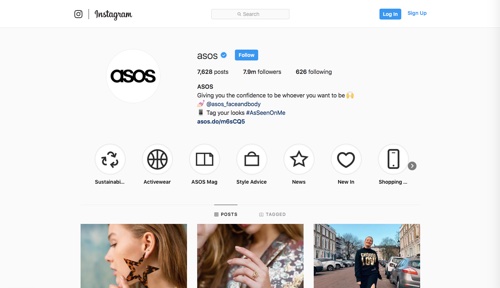 ASOS’s #AsSeenOnMe campaign is a good example of a brand stimulating user-generated content. Followers can use the #AsSeenOnMe hashtag for any outfit from the retailer. If selected, they are featured on the ASOS Instagram feed.

This pretty much sums up how every Monday this year felt 🥴 Get your #2018Wrapped 👉 https://t.co/owfUgXEQ4Q pic.twitter.com/22cU6dcD7S

Spotify began 2018 with a “2018 Goals” campaign, publishing funny and quirky resolutions via social ads to target each user’s location, in addition to local billboards. In December, Spotify began its #2018Wrapped campaign, encouraging listeners to check their year-end listening stats at Spotifywrapped.com. The #2018Wrapped campaign encompasses over 350 unique ads, many of which are region specific, featuring nearly 50 artists and creators. The year-in-review campaign is delivered in the quirky tone as the “Goals” campaign.

We’re thrilled that Olay has been nominated for #TheYouTubeAd That Rewrites the Rules! Click link in bio to vote for Olay.

2018 was a year of empowerment for women. Adding to the movement, Olay’s #FaceAnything campaign enlisted the Fearless 9, nine influencers across a wide range of professions and backgrounds, including a comedian, a gold medalist, and a cancer survivor. In the campaign, each of the nine women shares her personal story of overcoming obstacles and achieving her goals. The campaign ran across social media channels, as well as a microsite.

PART 1. 🔑🔑 MAJOR KEY ALERT!!! 🔑🔑 In full 2018 🔑🔑 MAJOR KEY ALERT!!! 🔑🔑 In full 2018 mode…excited to be living this #WWFreestyle life with you. I already Got rid of 20 pounds and ready for more. Ride with me on my journey to greatness. Bless up Weight Watchers!!! #2018secured what I love about this it’s a life style and I still can enjoy at the same time ride wit me though this journey ! I CAN SHOW YOU BETTER THAN I CAN TELL YOU … I’m so focused let’s go!! @weightwatchers (People following the Weight Watchers plan can expect to lose 1-2 lbs./week.)

On January 1, music producer and power-influencer DJ Khaled posted that he had joined Weight Watchers and was living the #WWFreestyle life. As a social media ambassador for Weight Watchers, Khaled shared his experience and progress across social media channels while following the new WW Freestyle program. Traditionally Weight Watchers’ celebrity spokespersons have been women. Involving DJ Khaled broadens the brand message to young men.