Facebook’s modifications to fan pages — most importantly the shift to Timeline — has reduced the use of specialized, third-party marketing apps. However, that does not mean these apps have gone away. Many offer promotional opportunities not found within Facebook’s native platform.

In this article, I share 13 new apps from 7 different companies that are worth your attention. 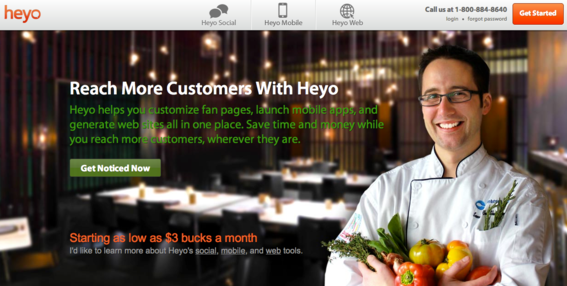 Lujure has transitioned to a new brand called Heyo.

Lujure is one of the more popular Facebook Page marketing applications. However, the company recently made the most significant change in its history and transitioned from being solely a Facebook Page app provider to one that incorporates mobile apps and a website building tool. The company also changed its name from Lujure to Heyo.

The fan page builder — now called Heyo Social — remains the heart of the new platform and provides the content for use in the mobile app and website.

Page owners can choose from template-driven or custom options. The company also offers over 30 widgets that can be incorporated into fan pages, including contests, buy buttons, and email opt-ins.

Once a fan page is built, its content can be included in a mobile app with a single click. “Customers can call you through your phone widget, email you through your email widget, follow you through your twitter widget, or redeem a deal using your deal widget,” states Heyo. Six mobile widgets are available in all.

Lastly, Heyo offers a hosted, drag and drop website building platform. As with the mobile app, content that has already been created via Heyo Social can be used within the site.

Prices start at $3 per month and scale upward based on the number of fan pages, widgets, mobiles apps, and websites used. 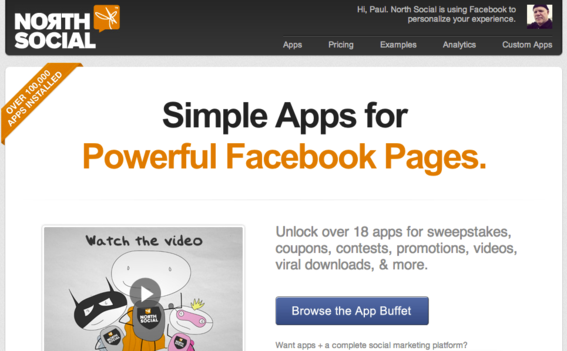 This app allows merchants to set up a series of daily promotions that automatically run from midnight to midnight each day during Advent.

Types of promotions vary from deals, coupons, downloads, or sweepstakes. For example, the app enables page owners to run a week of deals, 12 days of coupons, and up to 24 days of holiday deals (in keeping with the Advent calendar).

The Trivia Contest app is designed to provide page owners with a way to engage their fan base and help spread the word about their brands. Three contest options are included: True/False, Multiple Choice, and Personality Quiz.

Sharing is built in so that, after users complete a trivia challenge, they will be shown their results and prompted to share the application by challenging their friends to beat their score.

North Social offers tiered pricing, which starts at $1.00 per day, and is based on the number of fans a page has. All apps are included in the price.

This app integrates Pinterest into Facebook by giving page owners the ability to create a special offer or deal. However, to “unlock” the deal, fans must first pin it on Pinterest.

Similar to the Pin Deal app, to unlock a special deal on Facebook, the fan must first share it with others.

According to Tabsite, the Share Deal app is a “great tool for offering a special discount, an e-book download, savings code, or other promo that spreads because fans need to share the deal in order to get access themselves.”

The Group Deal app picks up where Share Deal leaves off. In this case, just like using group deal sites such as Groupon and LivingSocial, fan page owners set how many times a deal must be shared in order for it to be unlocked.

Tabsite pricing starts at $15 per month for its most popular plan. A 14-day free trial is also offered. However, the apps listed above require the use of what Tabsite refers to as its Platinum plan, which costs $25 per month. 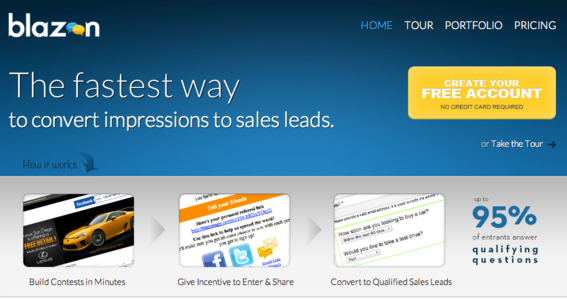 Blazon is a newer player on the Facebook Page marketing scene.

A new player on the Facebook marketing scene is Blazon, which provides a social marketing suite built around promotional campaigns and contests.

Blazon positions itself as the “fastest way to convert impressions into sales leads,” and does so using photo, text and video contests, as well as giveaways and sweepstakes.

Prices begin at just $5 per promotion and $0.99 per day. The most popular option starts at $19 and $2.49 per day. Promotions can be run for any period of time the user chooses.

Woobox offers a number of apps including group deals, polls, sweepstakes and coupons. Two of its newest, however, are Photo Contests and a Pinterest tab.

The Photo Contests app, which works with both Facebook and Twitter, allows fan and followers to upload photos that others can vote on. Entrants provide captions for their photo that are shown on the voting screen. Users can also share their own photo entry or that of others.

Fan page owners can download all entry data including email addresses for use in follow-up marketing, which is a particular benefit to using this app.

Though not tied to a contest or promotion, this app allows page owners to showcase their Pinterest boards and pins as a tab on a Facebook page. Users can be required to like the page before viewing the Pinterest tab.

Use of the Pinterest tab app is free. However, the Photo Contests app requires that users pay a monthly subscription fee of $29, which includes use of all Woobox apps. 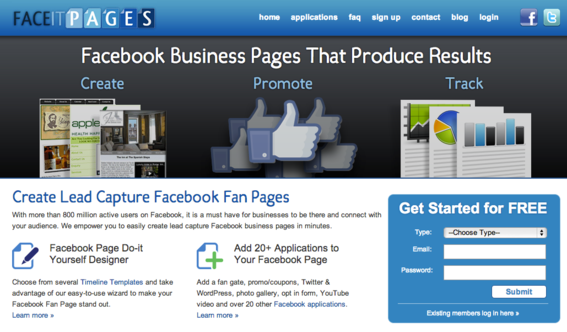 Like the other companies included in this list, FaceItPages provides several Facebook Page marketing options. However, there is one in particular that I want to mention. It’s called +Promote, which helps page owners gain “targeted likes” to their Facebook pages.

“With targeted fans, you have a much better chance of turning your likes into leads. The more targeted fans you have, the better chance those fans will engage with your page which will also help your Facebook Page Edgerank,” says FaceItPages.

The app promotes fan pages using Facebook ads that are targeted around the merchant’s market and ideal customer. The company focuses on setting up targeted, low cost, yet high converting ads that produce, according to the company, an 80 percent click-to-like ratio.

The key benefit to using this app is that it places the emphasis on quality over quantity. In other words, it is not designed to get the most fans for the money, but the ones most likely to engage with the brand.

Pricing is $15 per month of the most popular plan, but is free for the first 30 days. 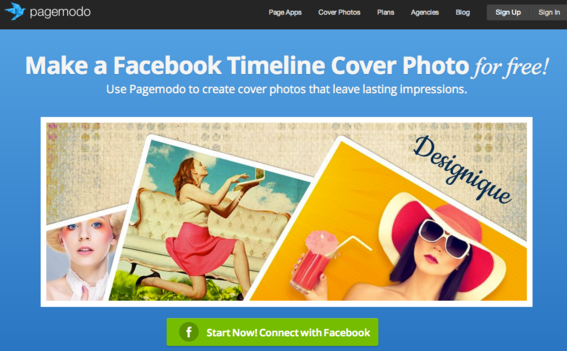 Pagemodo also offers social apps. One that I like is the Timeline Cover Photo designer.

The process is simple. You choose a template, which can consist of up to eight images, select a background image (Pagemodo provides a background image maker), choose images either from your computer or from images provided by Pagemodo, then publish the cover to your fan page.

It is important to change cover images on a routine basis to add freshness to the page. This app makes that process easy, and even fun. It’s also free to use. Pagemodo also offers a free level for use with a limited selection of its apps. Otherwise, plans start at $6.25 per month and scale up. (At the time of this writing, Pagemodo is running a pricing special, which cuts the monthly rate in half.)

Just because Facebook is offering its own marketing tools, primarily Promoted Posts, you can still use third-party applications such as those listed here. They contain a wealth of promotional opportunities that can lead to increased fan base growth, engagement and sales.