Facebook just launched a new advertising format called Promoted Posts, which allows Page administrators to turn any Timeline post into an ad that appears at the top of Fans’ news feeds. Promoted Posts increase the chance that more Fans will see it, and that more of their friends will too.

For example, if an ecommerce merchant wants inform Facebook fans about a special offer or new product, a Promoted Post would be one way to guarantee the message reaches a wider audience than a normal Timeline post.

Options include the ability to target posts based on location or language, and page administrators can track how many people see the post. Any post less than three days old, regardless of type — i.e., status update, photo, video or question — can be promoted using this new feature. Promoted Posts are marked as “Sponsored” in news feeds. Facebook requires that Pages have a minimum of 400 Likes before Promoted Posts can be used.

To give Promoted Posts a try, here is a step-by-step guide.

Click the “Public” button to choose targeting options based on location or language.

Use the Public button to select targeting options.

Click on the Promote drop-down button and set your desired budget, then click “Save.” (Note: The amount chosen applies to the lifetime of the ad and is not a daily budget.)

Click the Promote button to select set the budget. 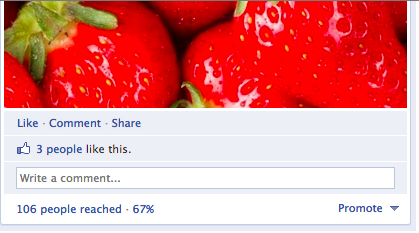 Posts less than 3 days old can be promoted.

For ecommerce merchants, the kinds of posts to be promoted could include the following.

Facebook’s help files include a set of best practices for the types of posts that should be promoted.

There are several advantages to using this new advertising model over traditional Facebook ads.

I have two concerns when it comes to using Promoted Posts. The first is cost. Promoted Posts start at $5.00 each and could be much higher, depending on the number of Fans and estimated amount of reach. Second, for users who are Fans of several pages, there is a possibility their news feeds could become clogged with Promoted Posts.

Despite those concerns, Promoted Posts could provide a more viable advertising option to merchants than traditional Facebook ads. It is certainly worth experimenting. Visit the help center to obtain more assistance on using Facebook Promoted Posts.