As Google rolls more features and functions into Google+, marketing on the new and fast growing social media network is increasingly important.

Last week, Google announced the launch of Google+ Local, which provides users with recommendations and information about local businesses including restaurants and retailers. The service looks like a combination of Google Places and Yelp! and seems like it could potentially create new marketing opportunities for businesses. 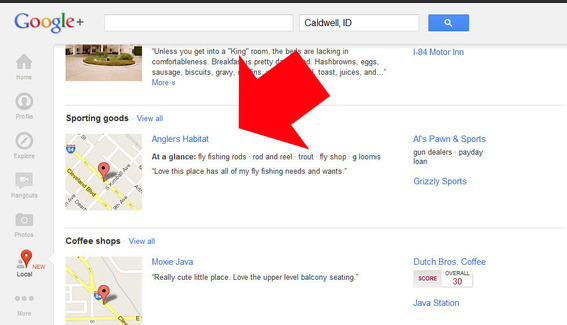 Google+ Local is the most recent update to the search company’s growing social network.

Google had previously integrated its profiles with Google+, included Google+ content in search results — more on this below — and more closely aligned Google+ with the popular Gmail service.

Beyond user count, Google+ content, as mentioned above, is included in Google’s search results. So having good Google+ presence may improve how a business performs in organic search results.

Brian Clark, founder of Copyblogger, wrote that “building an audience on Google+ may be the smartest thing you can do as a content marketer when it comes to improved search rankings. You still need to understand the language of your audience and reflect it back in your content, but Google will now have direct indications that you’re putting out quality stuff.”

Search results expert Danny Sullivan described the integration of Google+ results, even private ones, into Google search results, as the “most radical transformation ever.”

Whether or not Google+ integration in search results is truly radical, it should be considered.

For example, clothing retailer H&M — one of the most popular brands on Google+ — recently published a 31-photo Autumn and Winter “lookbook,” featuring some of the company’s forthcoming products. 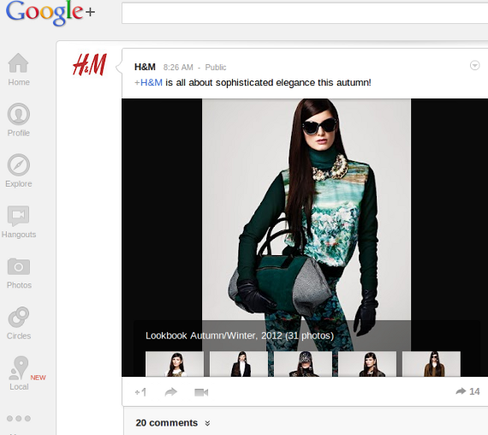 H&M’s Google+ page can be a good example for marketers.

Similarly, the Amazon Google+ page, which has nearly 300,000 users following it, frequently offers discounts or specials. 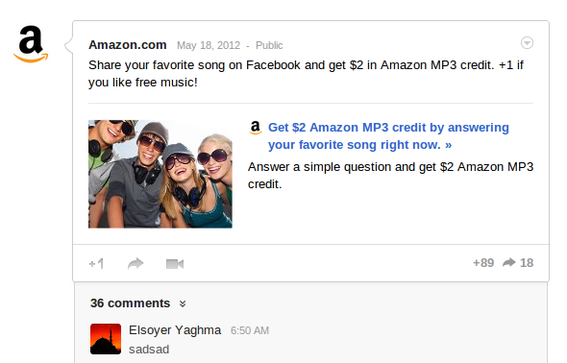 Amazon is actively publishing content, including offering discounts for interaction, on its Google+ page.

Google+ also offers “Hangouts,” which are similar to hosting an online meeting. Businesses could use Hangouts to introduce new products, put a very human and responsive face on customer service, or get immediate feedback from customers.

As a third marketing idea, Google+ is very friendly to photography, making it easy to upload images and display those images. Retailers, as an example, can post new products image or even insider photography.

I have a couple of Google+ marketing concerns. For example, some studies indicate that Google+ users only spend about three minutes a day using the service, which is very low in the context of social media engagement.

A second concern is that Google+ does not allow posts from third-party tools. This means that there is presently no way to automate posts. Perhaps, this is intentional since some have argued that automated social media posts broadcast to every possible channel are simply a new form a spam.

Google+ is growing both in terms of features and users. Marketers interested in engaging customers where they are might be wise to use Google’s social network.