Mobile adoption may be driving a surge in Twitter use, according to a major research firm.

A report from the Pew Internet & American Life Project released May 31, 2012 said, “Twitter usage is highly correlated with the use of mobile technologies, especially smartphones.”

This finding and other data related to how or why users tweet may indicate that Twitter could be an even more important channel for marketers in the mobile era.

The Pew Internet & American Life Project has been tracking Twitter use since November 2010 and has included a set of Twitter-specific questions on four surveys since then. When data from these surveys is compared, the microblogging platform’s mobile difference begins to become visible. 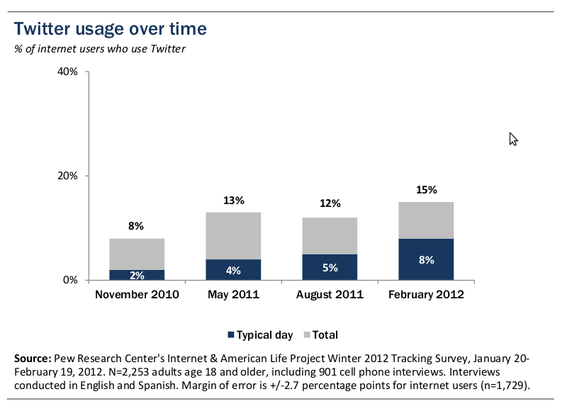 The Pew data shows that while overall Twitter usage had not grown remarkably from May 2011 to February 2012 — 13 percent of online adults compared to 15 percent — the percentage of Internet users that interact with Twitter on a typical day had doubled, indicating a significant increase in engagement, if not in adoption.

This increase in engagement, according to Pew, is likely because of mobile phones. Pew noted that both the largest growth in Twitter usage and the greatest growth in smartphone ownership came from the 18-to-24-year-old demographic.

One in five adult Internet users aged 18-to-24 interacted with Twitter on a typical day. About 11 percent of the most Twitter-using demographic, those aged 25-to-34, used the platform daily. 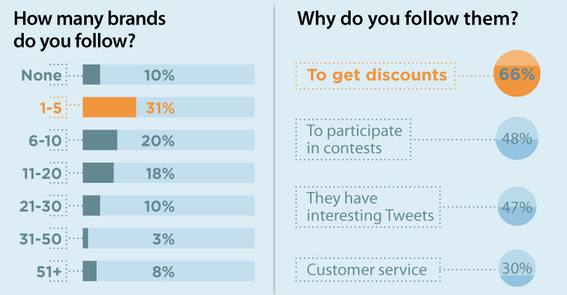 The fact that so many Twitter users follow brands may represent an opportunity for marketers. The same Lab24 survey found that 66 percent of those Twitter users that follow commercial brands do so to get discounts. Another 48 percent follow brands to enter and participate in contests.

When considered with the Pew data about Twitter user engagement and mobility, there may be an argument that Twitter could be a good channel for engaging mobile users with either flash sales or with contests.

Separately, it is also interesting that Twitter may be contributing to how users get news.

As a specific example, Twitter users tended to publish earlier and, perhaps, more accurate reports about the Arab Spring than did established media sites and publishers. A University of Chicago study looked at just how important Twitter, and mobile phones, became during the uprisings.

“One of the most remarkable things that happened, the [University of Chicago] group writes, during the initial stages of the Egyptian protests was how so many of those that lived in or around the places where the protests were taking place wound up relying on Twitter as their primary news source,” reported a summary of the University of Chicago report. “This came about as a result of authorities shutting down the Internet and maintaining a stranglehold on traditional news sources such as radio and television. Because mobile communications are so much more distributed, it was virtually impossible for Mubarak’s supporters to tear down the infrastructure in time to save the beleaguered leader. Thus, cell phones became the means by which news of events was carried, mainly by sending texts via Twitter because of the feature that allowed others to subscribe. When it became clear that someone was an actual eyewitness to events, they quickly amassed thousands of followers who then relied on that person to offer first-hand reports of what was going on. Then because there were numerous amateur reporters describing what was going on, there became an air of transparency or lack of bias because those reporters knew others were reporting on the same events, and if their story varied, they’d lose credibility and thus subscribers. Another impact was on other people in faraway places in the country who also came to rely on Twitter feeds as their main news resource.”

Similarly, Twitter has famously released news related to sports or celebrities before reports appeared in mainstream media. A sad example of Twitter’s reporting prowess may be the untimely death of singer Whitney Houston, which was accurately reported on Twitter 27 minutes before the Associated Press broke the news, according to Mashable.

Overall, Twitter and other social media sites may account for about 9 percent of news consumption, according to a separate Pew study from 2011.

This too may be useful for marketers who could employ the service not just to engage potential customers, but also to monitor trends.