Facebook cover designs are an opportunity to present an identity to the world. While some brands use the background of their website, others have provided some inspirational cover designs to give you some ideas.

Building a Facebook cover page is an opportunity for all kinds of marketing calls, from including ad-like content to meshing with users’ experience of social media. We’ll see both approaches, and plenty more, in the examples below.

Cover images are especially important from a local business’ standpoint. Local businesses need all the branding they can get, but may have an advantage over larger businesses when it comes to cover images. Many small businesses know at least some of their customers personally, so using a cover page as a way to reach out may be easier and can be more targeted.

These brands’ Facebook cover designs take full advantage of the fact that a cover design now takes up significant space on a Facebook page to tell the viewer something about the brand. 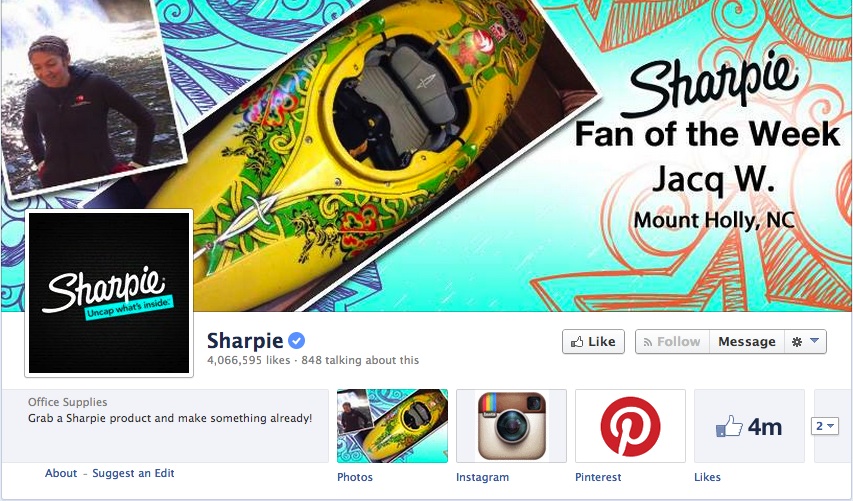 The Sharpie Facebook cover page has many elements that are good for the company’s image: fan art made with Sharpie pens that takes pride of place and is accompanied by details of the fan in question. At the time of writing, the company’s “Sharpie fan of the week” is Jacq W, of Mount Holly, NC, with her intricately decorated kayak. It’s an inspired way to show how good Sharpie products are for artists, and it helps the brand build its community and its image at the same time. 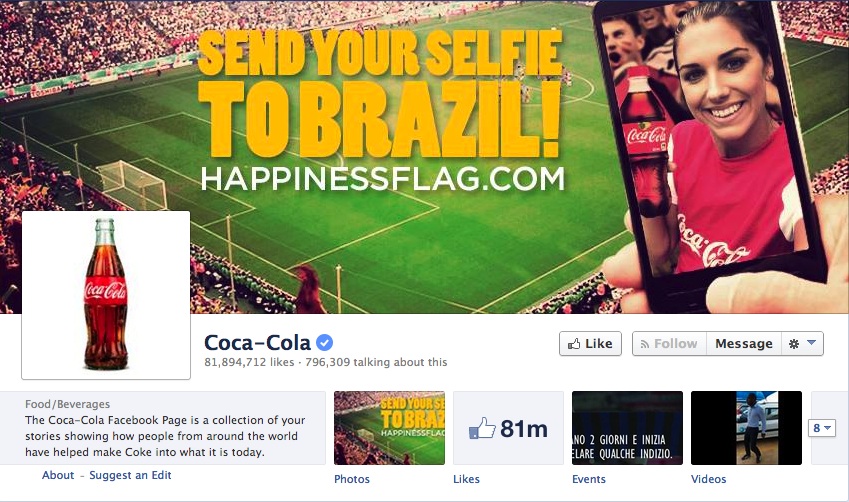 Coca-Cola has the budget, experience, brand identity, and worldwide reach to make its Facebook cover page about “a collection of stories showing how people from around the world have helped make Coke what it is today,” in the company’s own words. The current image is a group shot of young people, with a woman in the foreground, shown on a smartphone screen amid plenty of Coke branded merchandise. The background to the whole shot is a packed soccer stadium. Coke has adapted its brand imagery to fit the Latin American scene while remaining recognizable. Again, it’s about building image and community at the same time. 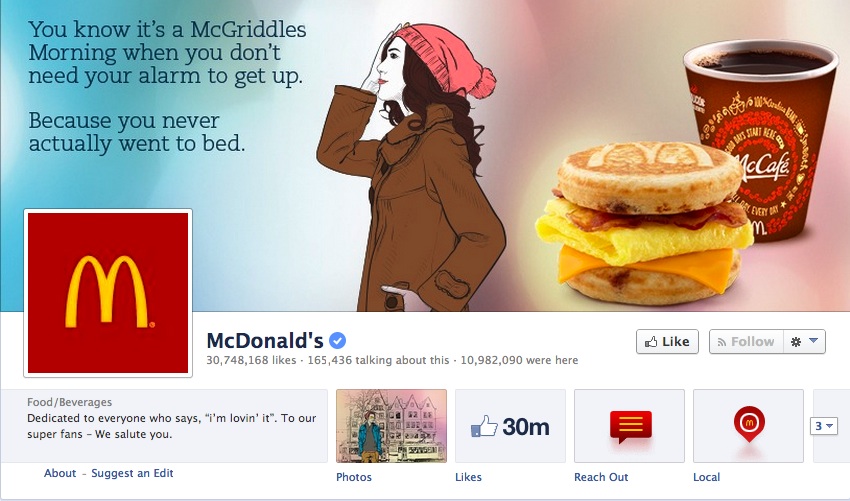 McDonald’s owe its success to the boom years of the 1950s — and to a savvy approach to mass production. Guess which one McDonald’s chose to commemorate on its Facebook cover photo. McDonald’s switches between cover photos that look back over its history, entwining the brand with golden age Americana nostalgia, and ultramodern, indie-looking choices. The previous image showed a “selfie” style photo of a young woman in a McDonald’s restaurant, while the current image mimics the graphics-plus-caption form of internet memes, capturing the call-and-response tone and the everyday confessional focus — as well as referencing McDonald’s own content. 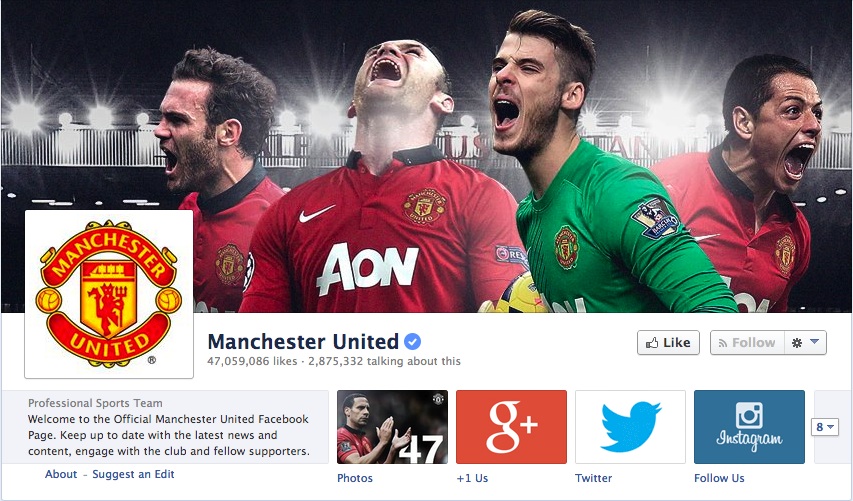 Manchester United is far from the only brand to realize that it can turn its Facebook page into a museum of the brand as well as a social channel. But Manchester United does it exceptionally well, pairing professional quality sports photography with information on the club dating back to 1908. Manchester United’s cover photo changes regularly and features a selection of action shots and photo-montages of great Manchester United players. The current photo shows you the moment of victory on the pitch through the faces of four of the team’s most recognizable names. 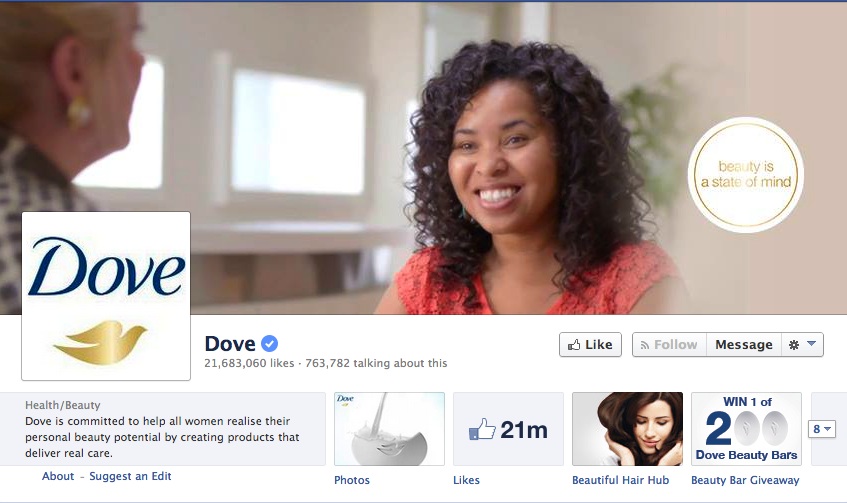 Dove claims that “real women have been our inspiration from the beginning,” and the brand uses a cover photos featuring women to emphasize the point. This photo is about celebrating the women the brand aims to “deliver real care” to, capitalizing on women’s desire for spaces where they don’t feel the pressure of magazine photography and excessive scrutiny. Dove is positioning itself as a safe and supportive friend, like the women in the photograph. 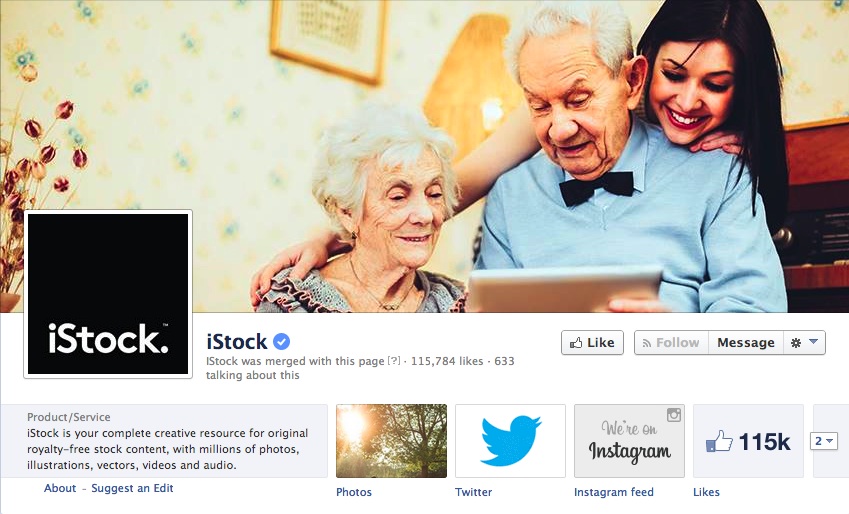 You’d expect a great image from an image website, and iStock doesn’t disappoint. Currently displaying a touching and narrative family shot, the company represents itself with bold, charming, and dynamic photography. It’s a clear sell-by-doing opportunity for a brand that deals in images, but it’s done in a classy and vibrant way that it makes you take notice. 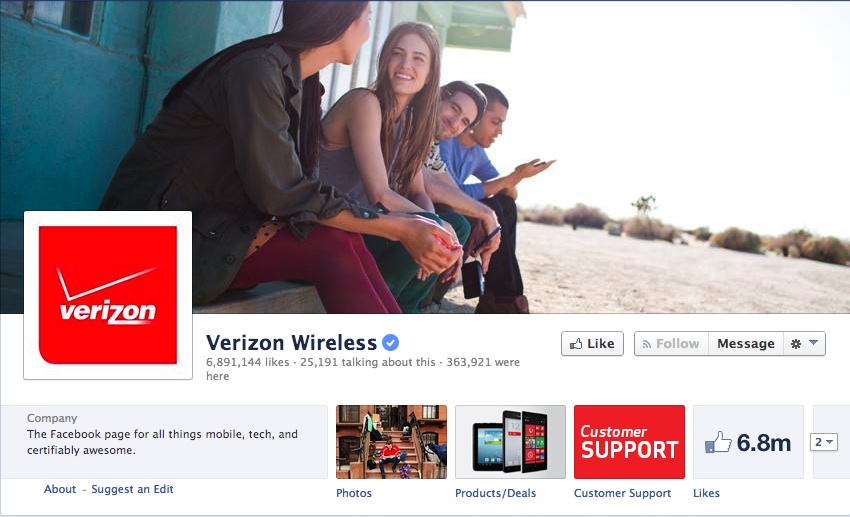 Verizon has gone with a shot that emphasizes wildness. At first glance, the four young people in the profile could be on a boat — it takes a moment to see that they’re in a desert. What’s clear from the start is that there isn’t a cable to plug in to for some distance, so it’s a good thing Verizon has them covered. One of the young men uses a phone, but interestingly, he’s in the background as the other three people chat with each other. Verizon is emphasizing the social nature of the product it has to offer and soft-pedaling any sales content in favor of brand-building. 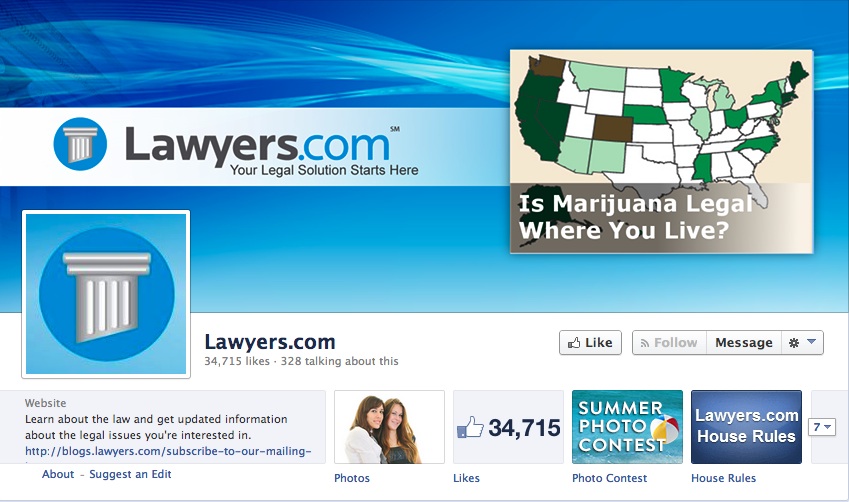 Macy’s Mad Men inspired couple display Macy’s colors in their clothes as well as their Macy’s bags. Underneath you can see Macy’s emphasizing its New York credentials and harking back along its history all the way to when it was a “fancy dry goods store” in 1822. 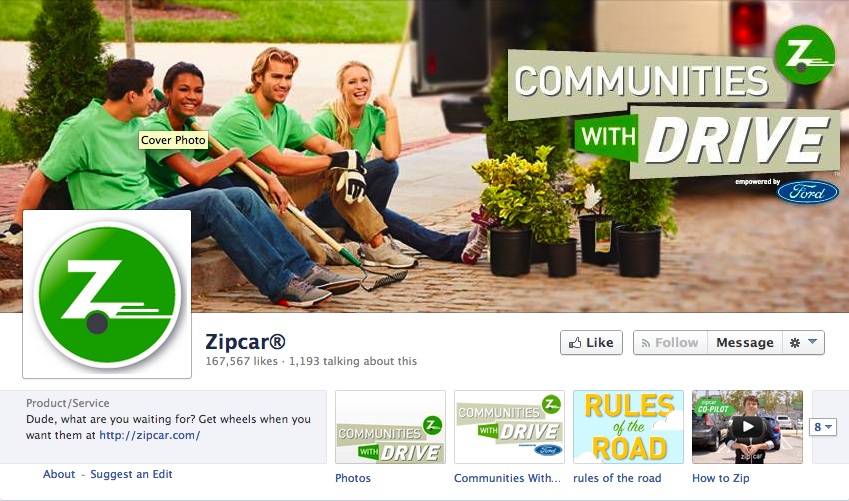 Zipcar uses a lively mix of youth-oriented imagery with subtle sales messages. Previous images have included snaps of places you might want to go in a Zipcar, showing a young couple standing in front of a sunset. The current photo is of a group of young people, out resting from yard work, next to the slogan “Communities with Drive.” If the photo doesn’t tempt you, Zipcar has a question for you underneath, “Dude, what are you waiting for? Get wheels when you want them.”

KLM, or Royal Dutch Airlines, use a classic piece of airline photography — a plane, taking off into a blue sky filled with wispy clouds. But there’s a twist. The tail of the plane is the profile picture, showing a classy yet innovative approach to branding that’s taken to greater extremes on many image-oriented small business Facebook pages. 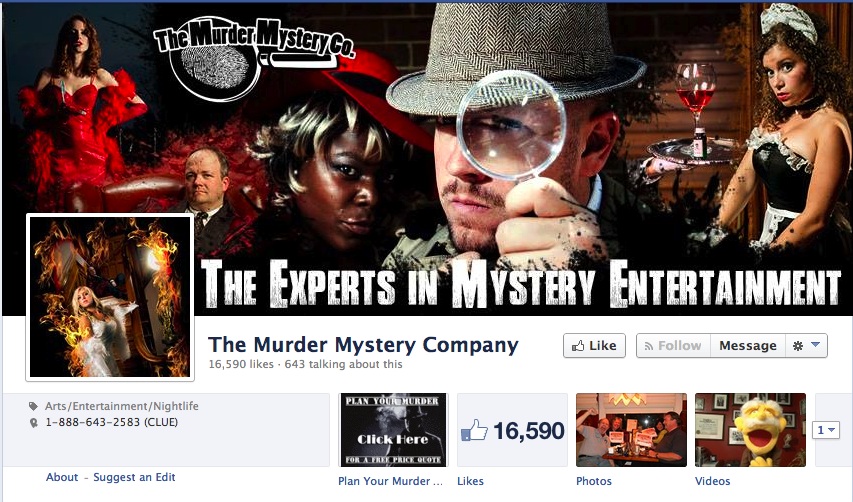 The Murder Mystery Company uses a filmic cover photo that references the tropes of murder mystery — a femme fatale, suspicious household help, a scarlet woman, and, front and center, a mustachioed detective with a tweed hat and a magnifying glass. It’s relevant, fun, and slightly tongue-in-cheek, and the rest of the page keeps up the tone with photos of events and lighthearted memes. In terms of personal branding and establishing a recognizable voice for the company, this photo is a winner.

Dropbox is the market leader in its space, and it has the confidence that goes with that. Dropbox doesn’t use a self-consciously professional or artistically lit cover snap. Instead, Dropbox uses a charming cartoon of a biplane flying over the Dropbox box, piloted by a childlike sketch of a person. 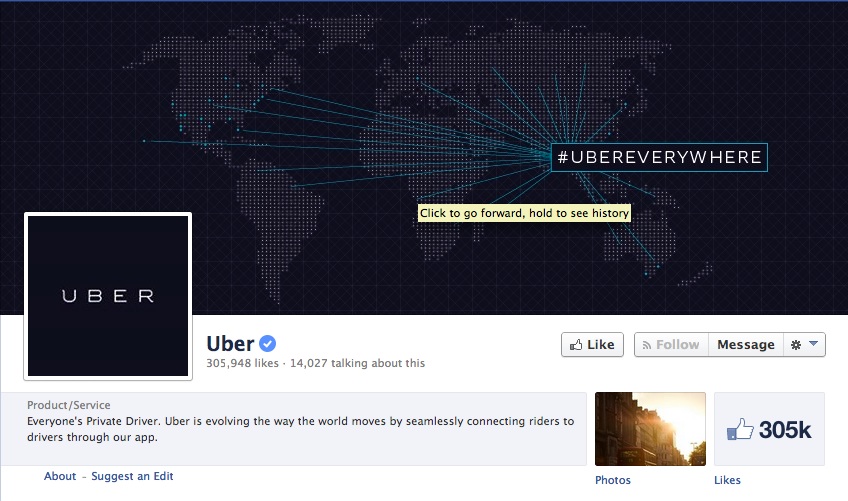 Uber’s cover image shows the cities the company operates in, demonstrating global reach and availability. Meanwhile, the style is classic yet modern — not retrospective so much as design-conscious. 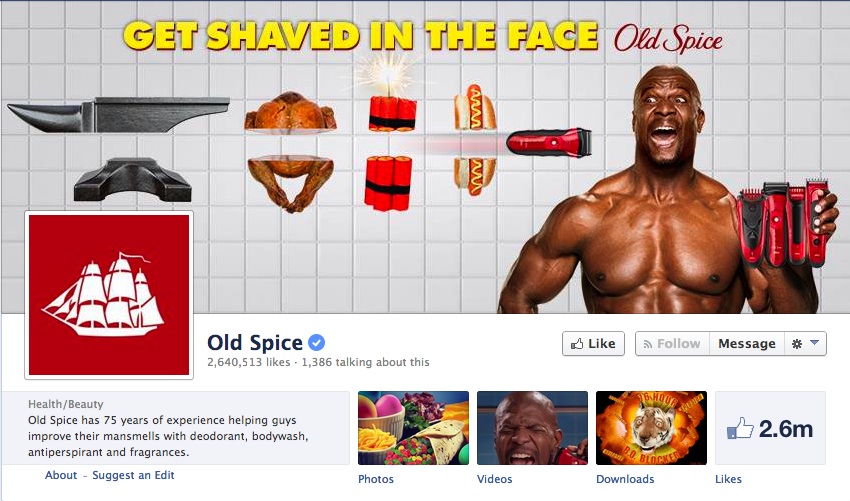 Old Spice is another brand with the confidence to treat its Facebook page lightheartedly. The comically ultra-macho images are deliberately self-mocking in a tongue-in-cheek way. The previous cover image, a tiger’s face backed by flames and attack helicopters, has been replaced by the slogan, “get shaved in the face,” showing an electric razor cutting through an anvil. The comic style carries through the rest of the page. 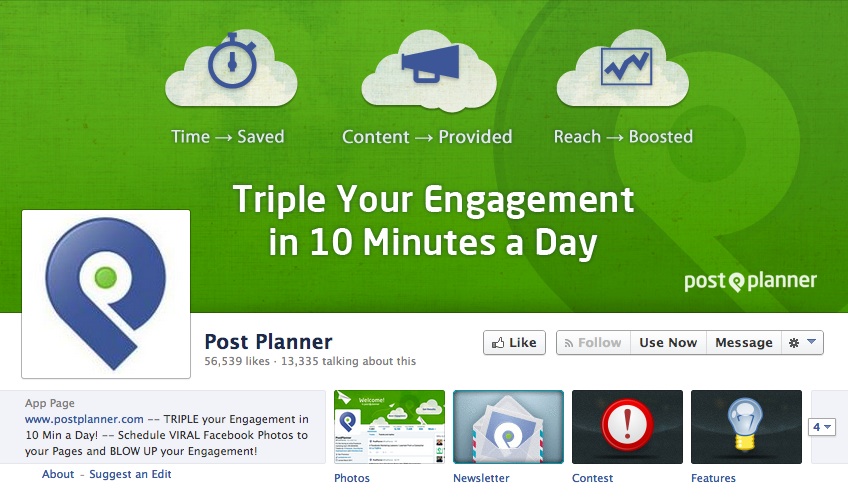 Post Planner has taken a different approach to the majority of branding exercises we’ve encountered thus far. Rather than using subtle imagery or humor, Post Planner uses a straight-ahead, design-aware image that showcases the core benefits offered by the brand. If you’ve never heard of Post Planner, one glance lets you know what they’re about. 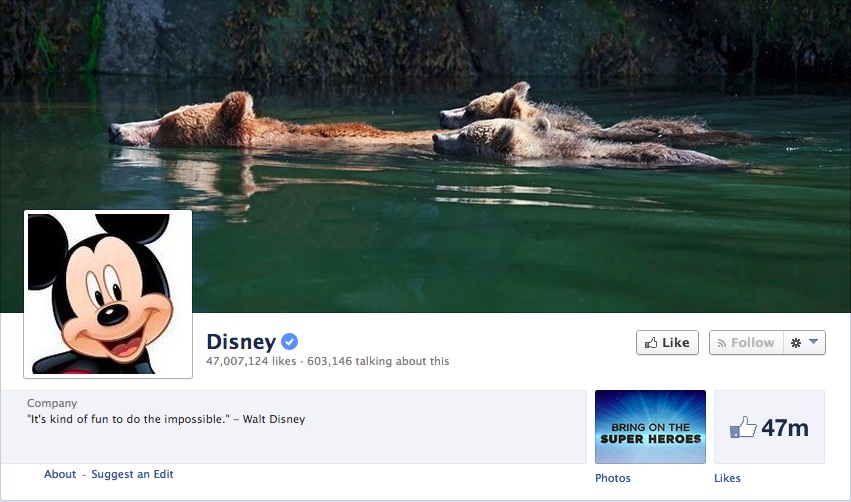 For most companies, it can be a challenge to create an image that communicates what the brand is all about. Disney already has established itself as a brand. Disney’s challenge is deciding which image to use, from so many that are instantly recognizable. Disney has gone with an image of a real family or bears swimming a river. The image is touching and skillfully shot — and Disney to the core. The image also has promotional benefit for the recently released Disneynature “Bears” film. 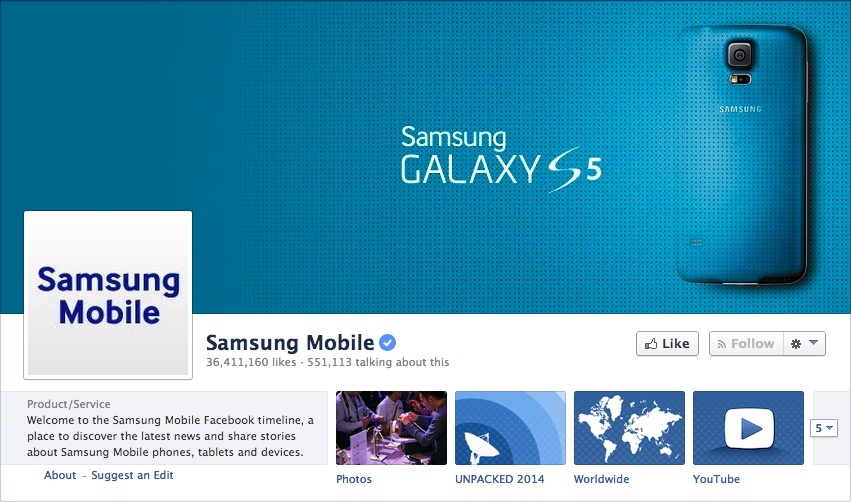 Samsung’s Facebook cover design is a textured shot of its latest smartphone seeming to emerge from a pattern of dots on a blue field. It’s stylish and contemporary, focused on product and confident in brand recognition as it asserts its identity. Samsung has reason to be confident as it is the fifth most engaged brand on Facebook.

Walmart uses images from its fans, a tried-and-tested method of building awareness, identity, and community together. The images it selects are family-oriented — kids fishing, a little girl playing in a garden, flowers. Walmart is establishing itself as the source of “Springtime Fun!” for families. 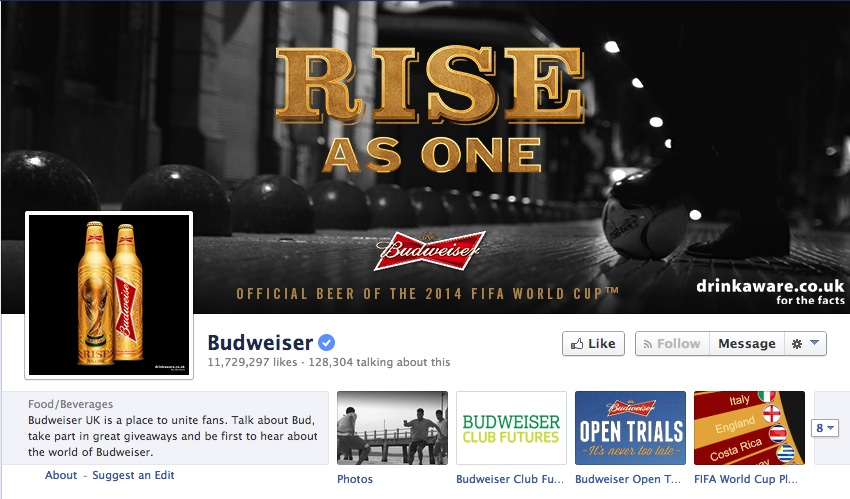 Budweiser has plenty to work with as a brand. Budweiser is known for its identification with American values and has positioned itself as a premium brand without losing mass appeal. In a stroke of exemplary topical marketing, Budweiser has run with an inspirational slogan, “Rise as One,” and a mostly-monochrome image of a foot on a soccer ball, to connect with the FIFA World Cup.

From the simple to the slick, from the stylish to the deliberately comical, all these designs have one thing in common: the brands they belong to weren’t afraid to go out on a limb. Creativity gets you noticed, and creativity and identity are vital when dealing with social media.