Blogs are a good way to engage customers, offer more than products, and attract visitors to a site.

Great blogs are often the result of great content in the form of a well-written post, an illuminating infographic, or an excellent video. People are attracted to the substance of the content, which can be very difficult to reproduce when you’re trying to start or improve your business blog.

But most blogs don’t produce one masterpiece of content after another, rather their overall success is at least in part the result of following some rather mechanical steps. Certainly quality is of first importance, but there are some lessons to be learnt about the operation of a top performing blog that are not just about writing well.

To help uncover these mechanical — and therefore repeatable — steps toward blogging excellence, I reviewed 17 blogs that I believed to be top performers. I have been able to glean three lessons that should help you improve your blog. Here is the list of the blogs I analyzed. The three lessons that I learned from them follows the list.

On average the 17 blogs analyzed posted 10 times each week. On the low end of the scale The Reddit Blog and Vistaprint’s Microbusiness Perspectives blog averaged 1.5 and 1.2 posts per week through January 21, 2012 respectively.

The Volokh Conspiracy was on the very high end of the scale with 63.9 blog posts per week on average. 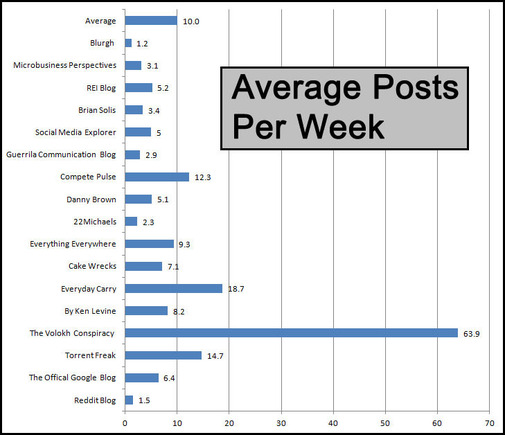 Average posts per week from initial publication through January 21, 2012.

Offering more content increases the chances that some post will resonate with a visitor and gives your blog a larger footprint for search engines to index. The greater frequency may also encourage readers to stop back more often to learn what’s new. The blogs I reviewed average 3,076 published posts each. The Volokh Conspiracy was again an outlier, but even when it was removed, the other blogs averaged 1,607 posts each. 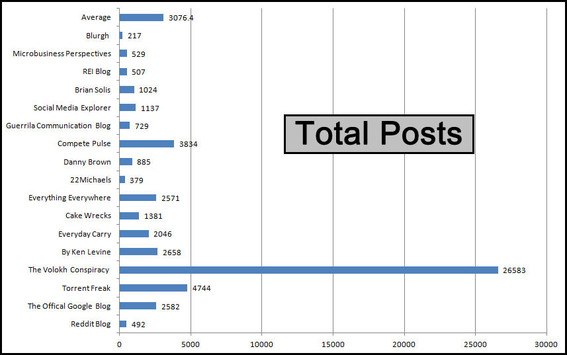 Total number of posts from initial publication through January 21, 2012. 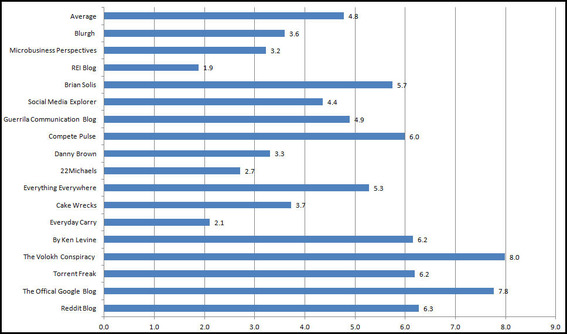 It seems that it takes time to build a following online. Likewise, it may be unreasonable to imagine that you can start a blog and have it soar to success in just a few months, rather treat your blog like a long-term marketing strategy, posting regularly to build relationships and traffic long term.

3. Be Brief, Unless You Have More to Say

The blogs reviewed tended to have relatively brief posts, averaging about 457 words per post in their five most recently published pieces of content. 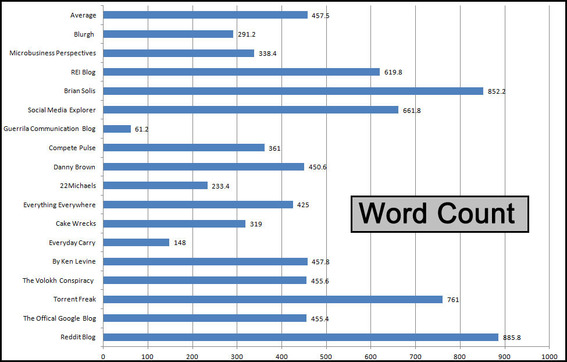 Average words per post in each blogs five most recent posts.

It is worth noting that each of the blogs also seems willing to go long when the content merited the additional length. For example, The Reddit Blog had a recent post with more than 2,600 words. One of the five most-recent REI Blog posts contained more than 1,600 words. TorrentFreak had a recent post with some 1,522 words, and both Brian Solis’ blog and Social Media Explorer had recent posts in excess of 1,300 words.

Interesting, there also seemed to be a relationship between shorter blog posts and the number of images used. For example, Cake Wrecks averaged just 319 words in each of its most recent five posts, but offered 28 images in those same posts.

As a rule, it may be a good idea to generally write shorter posts.

How the Blogs Were Selected

There are millions of websites on the Internet. So collecting a group of top performing blogs is not easy or perfect.

For my research, I looked at several lists that others had made of their top choices and why. I looked at services that rank pages based on traffic. I also considered social media to find my short list of top performing blogs.

For pragmatic reasons, I limited my view to English language blogs and blogs from which information could be easily found — no archives, sorry, I was not counting posts page by page.

Finally, I eliminated any blogs that, in my opinion, were complete publications, such as Mashable, Lifehacker, TMZ, Smashing Magazine, or Engadget.

Here are some of the resources I considered.