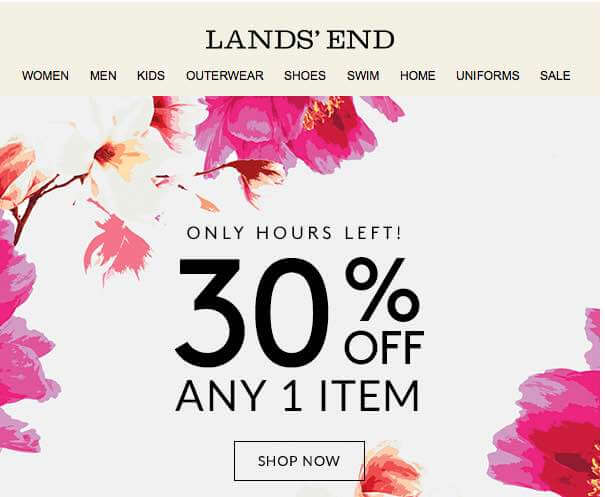 Lands’ End uses sophisticated email marketing to attract new customers, and sell more items to existing ones. The metrics to track the success of those campaigns, however, are becoming increasingly complicated.

Email metrics provide critical, quick feedback for a campaign. This is key because most opens and clicks occur within 72 hours after a send.

But measuring opens and clicks is often just scratching the surface of the actual performance of a campaign. In this post, I’ll compare three traditional email marketing metrics to newer, more meaningful ones.

Many email practitioners believe open rates are misleading. There are several reasons for this. First, for an “open” to register, the recipient of the email must download an image. Depending on the content and type of email, recipients who actually open and read it may never need to download images. Also, some preview screens will allow recipients to read an email without opening it.

Thus, open rates are oftentimes higher than what is reported. Despite this, the open rate has stuck around as the most popular benchmark for email engagement.

When I look at open rates across an email program, it’s important to understand who is opening. If a program consistently has a 15 percent open rate, does that mean the same 15 out of 100 people open every email? Or is it a new group of recipients each time? The answer is likely somewhere in the middle.

I call this the “open rate churn.” It’s the percentage of recipients who open every email versus those who seldom do.

Analyzing the open churn rate will produce a more complete picture of the overall engagement of a subscriber list. It will help determine the offer and frequency, too.

The number of clicks from an email campaign is easy to measure. But there may be a large discrepancy between what the email software is reporting as unique clicks versus the number of sessions in web analytics software that are attributed to the email campaign. This is typically caused by email recipients leaving a page before it and the tags fully load.

But, more than that, email practitioners have been struggling with the impact of smartphones on tracking and attributing traffic and sales from email campaigns. Google Analytics, for example, cannot always read tracking parameters when someone clicks from an email on her smartphone and the mobile version of a site loads.

It is becoming more difficult, in other words, for marketers to attribute sales to the email-marketing channel. This can lead to an under-reporting of email’s impact.

Regardless, email marketers can still generally gauge the traffic from email by isolating the time frame and the increase in traffic that a campaign will typically produce. Understanding the impact on the actual traffic to the site, and how that traffic performs, is a much more meaningful analysis than just the number of clicks.

About 10 years ago, I sent my first email campaign and ran a report the next day for performance. Tracking was simple then. I could easily attribute the traffic to the email. Likewise, I could attribute sales via other channels by an offer code.

But now, tracking and attribution is much more complex. Most consumers use multiple devices to shop and browse. There are many affiliate sites; consumers are better trained at locating deals and offers by visiting an affiliate site first. It all leads to a much more segmented and disjointed conversion path. It’s now extremely difficult to determine attribution for traffic and sales.

One sure-fire way to track sales and other conversions is a match-back analysis. The concept and process is simple: Compare the list of people who received a campaign to the list of those who converted. Flag those who “matched” to determine the impact of the campaign. Match-back analysis has been utilized for years in the direct marketing industry for physical mailers.

This process isn’t completely fool proof. There are different variables at which you can match an individual, such as an email address, a postal address, or even a name. Match-back analysis may over-attribute sales by linking people who have received an offer or campaign but ultimately purchased for a different reason.

Despite its flaws, a match-back will provide a comprehensive view of the impact of a campaign.