Unfortunately, increasing conversion rates is typically more of an art than a science. Thus there is not a sure-fire formula — based on some stack of statistics — that an online marketer can just implement to suddenly send sales soaring. Some niche merchants with narrow product lines might enjoy conversion rates as high as 10 percent, while other merchants using identical marketing tactics can barely squeeze out a conversion rate of one-tenth of one-percent.

This realization — that boosting conversions requires a bit of art — doesn’t mean that improving conversions is impossible. In fact, there are some basic tactics likely to help, but not guaranteed to do so. Most of these tactics rightly focus on optimizing and improving landing page design and content. This article’s goal is to get you thinking about your landing pages’ make up and to give you a few ideas that might help improve sales.

To define terms, the landing page is the initial page on a merchant’s site that a shopper sees when arriving from a pay-per-click ad, search engine results page, or similar link.

This is a store’s first and best hope of selling.

Many online marketers are masters at driving site traffic. These marketers create amazing PPC ad copy. But if the landing page on the other side of the link does not deliver what the ad promised or what the customer expected, there will almost certainly be an immediate disconnect. 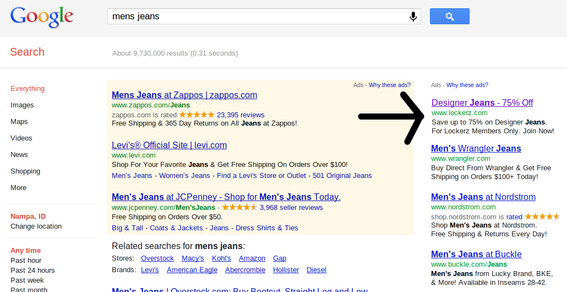 This ad appeared on a search page with results for “men’s jeans.”

In fact, a lack of continuity will almost certainly mean the loss of a sale. Consider a recent search for “men’s jeans” on Google, which resulted in an ad leading to a site featuring women’s jeans. Someone shopping for a male is not likely to convert from this landing page. 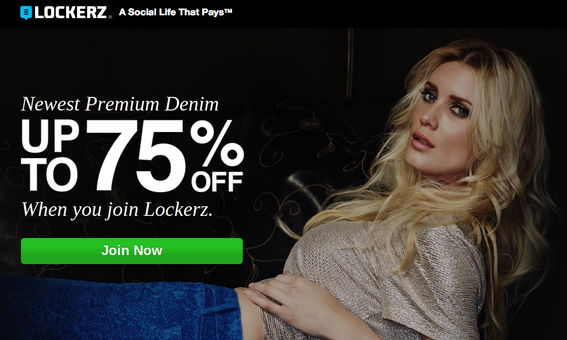 This was the landing page for the ad on the “men’s jeans” search results page.

In contrast, a merchant who had been advertising a particular style of ladies’ jeans saw a significant boost in conversions by repeating the offer from the ad on the landing page.

Dynamically repeating the an offer on a landing page is one way of adding continuity.

Consider testing a few options for both ad and landing page messaging.

There may be a lot of information that a landing page needs to communicate to site visitors, including product details, images, price, and, of course, a clear call to action. Optimizing a landing page for conversions can be something like putting together a jigsaw puzzle.

For example, one merchant wanted to give site visitors a great deal. So the merchant’s marketing team added a banner just below the product title on its landing pages. The banner offered free shipping. The merchant’s marketers also wanted to encourage reviews. So another bit of text promoting reviews was added. Free shipping offers and reviews often boost conversion. But in this case, sales actually began to drop. It seems that the page’s call to action — a bright and shinny “Add to Cart” button — had be pushed down below the proverbial fold when the new banner and text were added.

The lesson is to move items around the page, testing to learn how repositioning elements like the call to action, photos, or even headlines impacts sales.

Product photography is a key contributor to sales conversions. In fact, some now believe that the more a shopper interacts with the images the more likely that shopper is to make a purchase.

Anecdotally, tablet users are believed to be more likely to pinch, stretch, and rotate product images on landing pages than are shoppers using more traditional computing devices or users on smartphones. An Adobe study of shopper behavior during the 2011 Christmas season found that tablet users spent more than 50 percent more than smartphone users per purchase, and tablet users spent 20 percent more than laptop and desktop shoppers. Although it would be a stretch to assume a correlation, visually appealing graphics on landing pages could boost conversions.

Experiment with adding and removing content on landing pages too. Some reports have indicated that adding video to a landing page, might significantly improve sales. Likewise, well written product descriptions, page layout, and even color selection could all be contributors to a good or bad conversion rate.

Conversion rates are a key to ecommerce success, but there is not one hard and fast recipe for success. Marketers need to change and test landing page design and content.