4 Predictions for the 2017 Holiday Shopping Season

During the 2017 holiday shopping season, expect weather, mobile commerce, and self-gifting to contribute to an 18 percent growth in U.S. digital retail sales.

For the last few years, I have made annual predictions for the holidays. I am far from perfect, but I have been correct quite a bit. I am taking a risk with my fourth prediction this year: an 18 percent growth in ecommerce sales. Do you think I will be right? 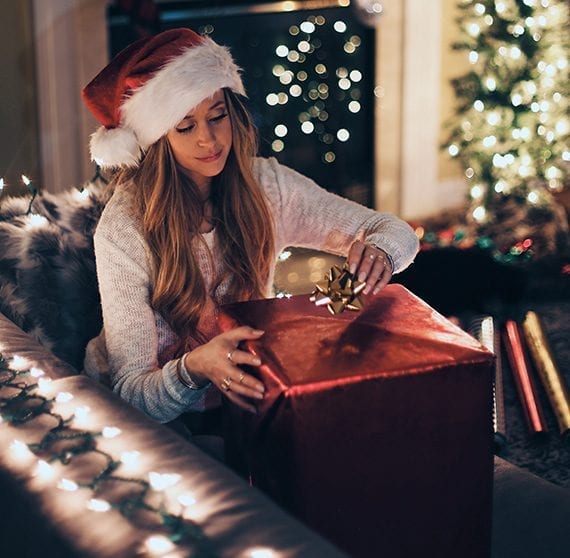 Growth in mobile commerce, winter weather, and advertising around self-gifting may boost ecommerce sales this Christmas. Photo by Roberto Nickson.

Brick-and-mortar retailers have long understood how much weather impacts sales. Demand for umbrellas always goes up when it rains.

Long-range weather forecasts suggest that the days leading up to Black Friday and Cyber Monday may be colder than last year.

While the first chill of winter is often good for brick-and-mortar retailers, a cool Black Friday might encourage some shoppers to go online instead of driving to a big box store.

2. 25 Percent of U.S. Ecommerce Sales Will Come From Mobile

There is a mobile ecommerce gap. A majority of American shoppers spend more time online on a mobile device than they do on a desktop or laptop computer. Nonetheless, as a group, ecommerce shoppers are significantly more likely to make purchases from a laptop or desktop system.

Why? Because too many online stores don’t provide a good mobile shopping experience. When retailers can make it just as easy to find and buy products on a small, touch screen, ecommerce will become mobile commerce.

Enterprise retailers like Amazon are the first to really make mobile commerce work. So they will be the ones enjoying the sales growth in November and December.

For the 2017 holiday shopping season, I think mobile commerce sales will account for 25 percent of all U.S. digital sales.

3. Self Gifting Will Be Big

Not every “holiday” purchase from Halloween to Christmas is a gift for someone else.

About 70 percent of shoppers admit that they bought a gift or two for themselves during the holiday season last year, according to the National Retail Federation.

So called self-gifting is not new. Retailers have seen the trend for years. But in 2017, organizations, including the aforementioned NRF, are encouraging retail business to market at self-gifters.

“Self-gifters are also open to recommendations; retailers should create calls to action for shoppers to ‘treat themselves.’ One common self-gifting strategy is to offer bonuses with gift cards and holiday purchases,” the NRF reported in its 2017 Retail Holiday Planning Playbook.

Given this encouragement (and early reminder) from the NRF, I expect more retailers to make self-gifting offers and promote self-gifting in advertising.

During the holiday season, whenever you see a self-gifting offer, please message me on Twitter or paste it into the comments below.

Some in the retail industry are suggesting that U.S. ecommerce sales may slow a bit in 2017 relative to previous years.

As an example, eMarketer predicted that digital holiday sales would increase about 15.8 percent this year, compared to a 17-percent increase in 2016.

I am a bit more optimistic. In my opinion, enterprise ecommerce merchants have done a good job of creating mobile shopping experiences (see prediction 1.), helping to fuel ecommerce sales this Christmas.

In September 2016, I made a similar list of holiday shopping predictions. Depending on how generously you grade me, I either got two or three correct.

“60 Percent of Online Orders Will Include Free Shipping.” At the time of writing, I could not find a study or survey that generated this number. So I cannot verify that 60 percent of online orders included a free shipping offer. What did your ecommerce company experience?

“Mobile Commerce Will Grow 60 Percent.” In the United States, mobile commerce sales for November and December grew from about $11.8 billion to $17.1 billion last year, an increase of 44 percent year-over-year, according to comScore. I was, it seemed, a little too optimistic. About 21 percent of all holiday digital sales (excluding travel) came from a mobile device. 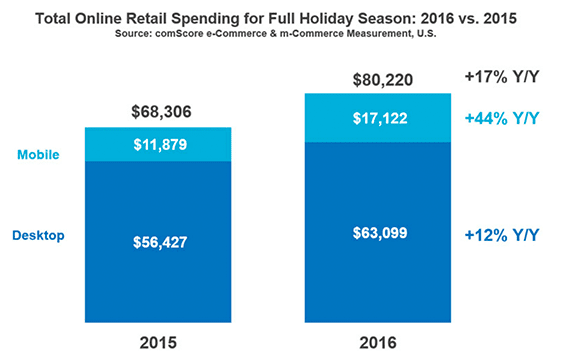 “Ecommerce Sales Will Grow 13 Percent.” Ecommerce sales for November and December rose 17 percent in the United States in 2016, from roughly $68.3 billion to roughly $80.2 billion, according to comScore. Thus my prediction of 13 percent growth was too conservative.

“Video Advertising on the Rise.” This was a soft prediction without a specific amount of increase. But I was, nonetheless, correct that video advertising rose. “In 2015, U.S. agency and marketing professionals said they spent, on average, $5.6 million on digital and mobile video advertising,” according to eMarketer, “A year later, they spent an average of $6.8 million, and this year [2017] they anticipate spending an average of $9.4 million.”