Prior to the Internet, if consumers were dissatisfied with a company, its products or services, they would tell a few friends who might also tell a few others. Maybe the consumer would write a letter to the company or call the customer service department to complain. For the most part, however, that’s where it ended.

Now, that person can express his or her viewpoint via Facebook or Twitter and see the message spread quickly. Smart companies recognize that social media has given customers a greater capacity to influence buying decisions and are taking steps to ensure that positive relationships are built with key influencers.

The first step toward developing such relationships is finding who these influencers are and where they maintain a presence online. You can use comprehensive brand reputation monitoring tools — such as Alterian SM2, Trackur or Brandseye — for this purpose.

Even free tools such as Tweetbeep, which monitors conversations within Twitter based on keywords you input, or Twitter search can help identify potential influencers.

Once the list of influencers has been identified, merchants can determine their influence using one of following five tools.

A recent article in Fast Company stated that Klout can measure the influence of 75 million people. It is well on its way to becoming the de facto standard for influence measurement among brands such as Audi, Subway and Hewlett-Packard. However, its measurement capabilities aren’t limited to large companies. Any company — regardless of size — can make use of the tool. All that’s required is a Twitter username.

Input a Twitter username and Klout’s algorithm goes to work to return a relative assessment of online influence. According to Klout’s “About” page, the Klout score is the “measurement of a person’s overall online influence. Scores range from 1 to 100, with higher scores representing a wider and stronger sphere of influence.” Klout uses over 35 variables on Facebook, LinkedIn and Twitter to measure three factors: “True Reach,” “Amplification Probability,” and “Network Score.”

Aside from the total score as presented in the graphic above, Klout shows a list of topics where it determines a person — or company, for that matter — has influence. For example, it suggests Practical eCommerce has influence regarding ecommerce, business, social media, search engine optimization, and Internet marketing. That information is useful to anyone searching for influencers on such topics.

A feature that sets Klout apart from other influence measurement tools is Klout Style, which is an assessment of influence style or personality based on how often the user shares links or directly engages with others, and whether the content shared is original or from third-party sites. 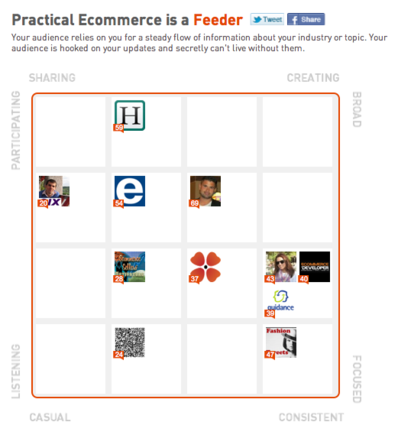 Klout Style measures the “style” of a person’s influence based on the manner of engagement.

Klout calls Practical eCommerce a “Feeder,” saying that, “Your audience relies on you for a steady flow of information about your industry or topic. Your audience is hooked on your updates and secretly can’t live without them.” (We certainly hope that’s the case.) 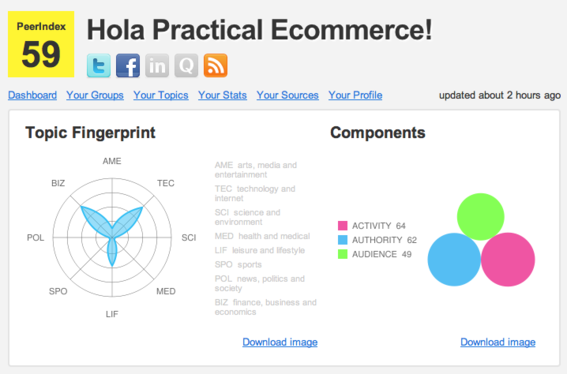 PeerIndex uses benchmarks to decide a person’s online reputation and degree of influence, something the company refers to as “PeerIndex Footprint.” Included in the list are:

PeerIndex scores are not limited to data strictly from Twitter. The scores can use data from Facebook, LinkedIn, Quora and your blog or website. The dashboard provides information on topical authority and allows you to compare one person’s influence versus others.

Twitter Grader is one of a set of measurement tools provided by Hubspot.

Twitter Grader is a part of the “Grader” suite, from web marketing company Hubspot, to help marketers analyze the effect of their efforts across a variety of channels, including Twitter, Facebook, blogs and more. The free suite of tools serves a two-fold purpose. Not only do they assist marketers in research, but they also help Hubspot gain exposure.

To determine a person’s — or company’s — influence, Twitter Grader looks at factors such as: number of followers, influence of people following the user, frequency of updates, the ratio between followers and those the user follows, and the degree of engagement, such as retweets, @mentions, and replies.

Twitter Grader scores tend to range higher than Klout and the other tools mentioned in the article. For example, Practical eCommerce receives a score of 98.2 out of 100. But the score on my Twitter username, @pchaney, is 100 out of 100. Such a high score causes me to be suspect of its validity. Therefore, I would be certain to use at least one or two of the other tools on the list, as well.

Like other metric and analytic dashboards, Twitalyzer provides an overview of how much impact or clout a Twitter account has based on things like number of followers, number of people following, number of retweets, and how often an account replies to other users and engages in conversations.

Anyone can gauge a person’s influence simply by inputting his or her Twitter username. However, more data is available via one of the premium options, which start at $4.99 per month.

Practical eCommerce’s Armando Roggio, who reviewed Twitalyzer in “The PEC Review: Twitalyzer Offers Analytics for your Twitter Accounts,” in June 2010, said that “Twitalyzer is a very good analytics tool that will provide you timely and accurate data to optimize your Twitter marketing efforts. Put another way, if you are serious about engaging potential customers on Twitter, this solution is well worth the price tag.”

Backtype calls itself an “analytics platform that helps companies understand their social impact.” It varies somewhat from the previous examples in that it does not require the use of a Twitter username. Instead, it provides three options: URLs, topics, or people.

For example, if I enter the URL for Practical eCommerce, I get a chart that graphs the number of tweets and comments related to the domain. 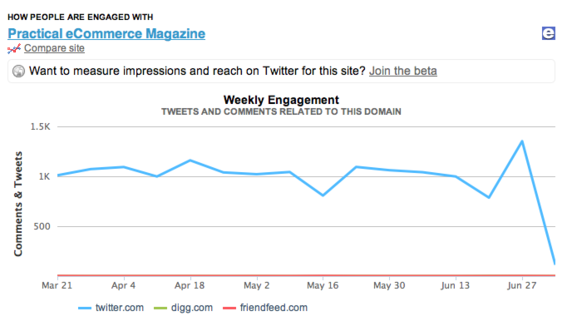 Backtype data based on the Practical eCommerce URL.

On the other hand, if I choose the “People” option in the search field and enter my name, I get charts that show: the number of Twitter followers I have, how I use Twitter, and a list of those I influence, as well as people who influence me on Twitter.

Backtype data based on the use of my name, Paul Chaney.

Since all the returns appear to be related to Twitter, I’m puzzled as to why Backtype doesn’t just ask for my Twitter handle.

Use these measurement tools with a grain of salt. No software can replace the value common sense and good judgment. Nonetheless, these tools provide a baseline by which to determine whether a person or company stands to have a greater degree of influence than others. Use them with discretion.