From celebrating the contributions of Hispanic Americans to talking like a pirate, September 2018 is full of opportunities to create engaging content that could drive traffic to your website and earn your business more sales.

Content marketing is the act of creating, publishing, and distributing content such as articles, videos, and podcasts with the goal of attracting, engaging, and retaining customers.

America is a melting pot. Many have said it, including Presidents Ronald Reagan and Jimmy Carter. The nation benefits from the blending of skills and cultures in both the social and economic sense.

“Every aspect of the American economy has profited from the contributions of immigrants,” said President John F. Kennedy.

The appreciation of and even celebration of these cultural and economic contributions have led to observances such as Hispanic Heritage Month, which begins on September 15 and runs through October 15.

Your ecommerce business could use this opportunity to create articles or videos recognizing the contributions of Americans whose ancestors came from Spain, the Caribbean, and Central and South America.

As an example, a home decor retailer might create an article about Adela Akers. Akers, who now resides in California, was born in Spain and raised in Cuba. For 23 years from 1972 to 1995, Akers was professor emeritus at Temple University’s Stella Elkins Tyler School of Art in Philadelphia, Penn. Her woven wall hangings, which feature geometric shapes, have inspired decorators and influenced many home decor designs.

KQED, a public broadcasting service in San Francisco, interviewed Akers in 2007. This introspective is still available on YouTube and makes for compelling source material.

It is worth mentioning that the Hispanic community also represents a significant opportunity for retailers. A 2017 Forbes article pointed out that “almost 25 percent of all U.S. millennials are Hispanic, and these consumers, while displaying similarities with other non-Hispanic millennials when it comes to attitudes and behaviors, also demonstrate a strong connection to the Latino culture. For marketers, when these cultural nuances are in play, unique marketing opportunities are created.”

More than two-thirds of American adults have at least one cup of coffee a day, according to a 2015 Gallup poll, making coffee one of the nation’s most popular beverages, and, perhaps, a good topic for some of your company’s September 2018 content marketing. 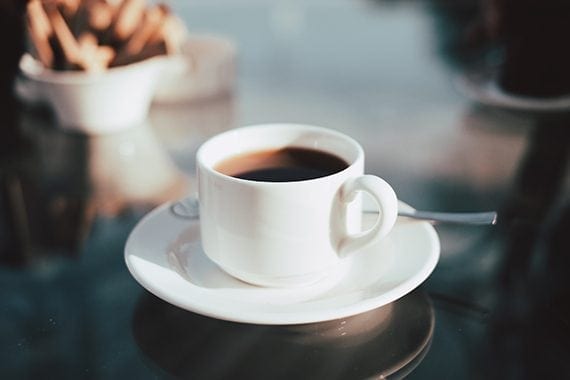 Why not write about National Coffee Day? After all, coffee is one of the most popular beverages in America. Photo by Emre Gencer.

Remember, content marketing should be useful, informative, or entertaining. So if you decide to write articles or make videos around National Coffee Day, ensure your audience of potential customers receives real value.

Choose topics that make sense for the customers your business serves. For example, a kitchen supply retailer such as Williams-Sonoma or Sur La Table could write about the history of coffee, explain fair trade, or even offer tips for making a better tasting cup.

Other businesses might have to get more creative. A company that sells workwear online — think products like Berne or Carhartt clothes or Wolverine boots — could create an unbiased review of coffee thermoses, identifying which ones keep coffee the freshest and hottest all day. Or given that many popular restaurants offer free coffee on National Coffee Day, this same workwear shop could publish a review of the best tasting free coffee.

In short, find a way to connect this popular drink to your business.

The internet may be desperate for a primer on how to speak like a pirate. This September, your business could fill this void.

Talk Like a Pirate Day was first conceived in 1995, but it came to prominence after Miami Herald humor columnist Dave Barry wrote about it in 2002.

“Every now and then, some visionary individuals come along with a concept that is so original and so revolutionary that your immediate reaction is: ‘Those individuals should be on medication,”’ Barry wrote.

“Today I want to tell you about two such people, John Baur and Mark Summers, who have come up with a concept that is going to make you kick yourself for not thinking of it first: Talk Like a Pirate Day.”

“Baur and Summers came up with this idea a few years ago. They were playing racquetball, and, as so often happens, they began talking like pirates. And then it struck them: Why not have a day when EVERYBODY talks like a pirate? They decided that the logical day would be September 19, because that — as you are no doubt aware — is Summers’ ex-wife’s birthday.”

Barry goes on to give examples of speaking like a pirate, including a direct quote from President George W. Bush, before concluding, “as you can see, talking like a pirate will infuse your everyday conversations with romance and danger.”

Some 16 years later, however, most folks don’t know how to speak like a pirate. Baur and Summers tried to help with “quick lesson on the five A’s” of pirate speak in a somewhat sexist video from 2006. But there is still an opportunity for your business.

This September, try to create the definitive guide for pirate-speak.

Timelines help your audience of potential customers understand how events or milestones are related chronologically. You can use a timeline to describe the development of a product, the expansion of an industry, or changes in consumer preferences.

If, for example, you have a clothing store, you could draw inspiration from the likes of digital publisher Shmoop, which released a comprehensive timeline for the History of American Fashion. This timeline is textbook-like. It includes dates with a short description of some important events in American fashion history. Here are a few selections.

You could use your timeline in an academic way or to entertain. That may have been what Glam was doing with its 100 Years of Fashion video.

It is fair and sensible to occasionally use your content marketing to tell a story about your business. In fact, it can be a good idea.

In September, consider telling a story about privacy or more specifically what your business does to defend customers’ personal information.

Privacy has been a hot topic in 2018. The European Union’s General Data Protection Regulation took effect on May 25, 2018. This landmark law does many very good things for personal privacy. But it also raised many concerns.