3 Mistakes to Avoid on the Google Display Network

Over the years Google Ads — formerly AdWords — has been that company’s revenue engine. But after it mastered keyword-based search, Google expanded its advertising offerings with the Display Network, which launched in 2005.

The Google Display Network has the potential to generate massive traffic. How massive? Well, GDN consists of “over 1 million websites, apps, videos, blogs, and other destinations” and serves over 180 billion impressions each month. That equals 80 percent of worldwide internet users.

That’s a powerful opportunity for any advertiser. But GDN can cause powerful harm when mistakes occur. Here are three dangers of advertising on the GDN and how you can avoid them.

The GDN allows many types of targeting. The most common is called “contextual.” This takes the keywords entered by an advertiser and matches them with the text on web pages where ads are displayed. For example, if you were advertising a funeral home, you might enter keywords such as “funeral,” “funeral home,” and “cremation” to instruct Google on the pages to show your ads.

However, it can backfire, as shown in the screenshot below. Presumably Haben Funeral Home does not want its ad appearing next to a tragic news story. 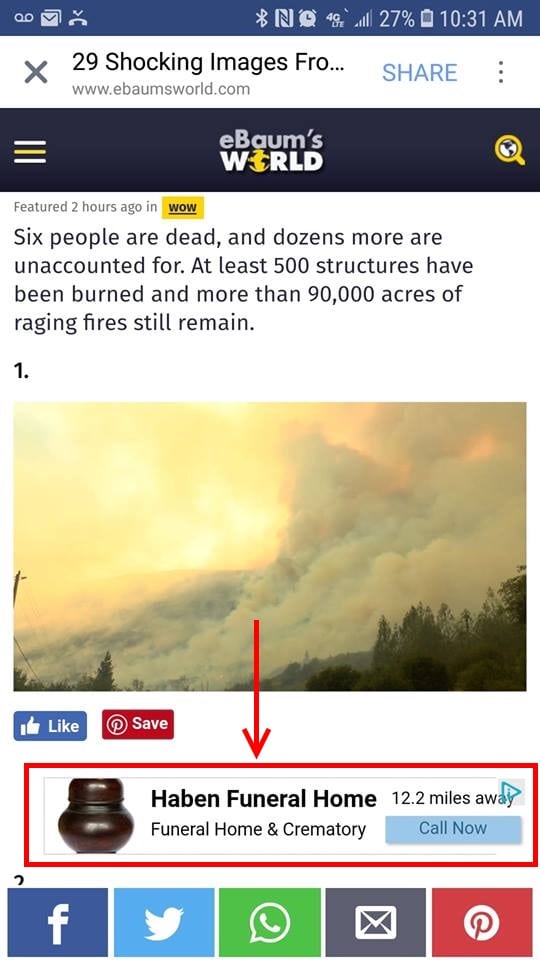 Presumably Haben Funeral Home does not want its ad appearing next to a tragic news story.

Likely a funeral home above does not want its ad appearing next to a news story documenting the tragic loss of six lives in a wildfire. But the GDN algorithm looks just at contextual relationships. The story describes death, which is semantically close to “funerals” and “cremation.” So how do advertisers prevent this?

To eliminate potentially poor placements, advertisers can check boxes — such as “Tragedy and conflict,” Sensitive social issues,” and “Profanity and rough language.” Click image to enlarge.

While content exclusions are completed to the best of our ability, we can’t guarantee that all related content will be excluded.

Therefore, also use negative keywords. In the example above, the funeral home advertiser could consider negative keywords related to natural disasters such as “fire,” “hurricane,” and “earthquake” to eliminate pages that discuss these potential tragedies.

As they fine-tune their targeting, advertisers can overwhelm prospects with ads. If you have very specific targeting criteria and a large budget for GDN campaigns, potential customers could see your ads a lot. That could be annoying.

There is an easy solution, however. Go to Settings > Frequency capping in the GDN campaign interface. In this section, you can tell Google to only show your ad a certain number of times per day, week, or month by ad, ad group, or campaign.

At Settings > Frequency capping, you can tell Google to show your ad only a certain number of times. Click image to enlarge.

A smartphone can be a good babysitter for a couple of minutes. But it can also show ads that children inevitably click.

Similarly, certain apps on a smartphone can show ads that almost certainly are ineffective. Take a flashlight app, for example. There are almost no instances where potential clients, in the dark, respond to, say, an insurance ad.

Solving this problem has been easy. Add adsenseformobileapps.com as a negative placement and GDN ads won’t appear on mobile apps. However, Google just sent an email announcing that this functionality would be eliminated.

In September 2018, the adsenseformobileapps.com exclusion and the GMob mobile app non-interstitial exclusion will no longer be available within Google Ads. Device settings will also be consolidated into three device types: computer, mobile, and tablet.

This change simplifies reaching mobile users across the web and on apps. It may impact ads on mobile apps. You may see a significant increase in mobile apps traffic or mobile web traffic depending on your current settings.

Yes, Google is eliminating the placement as well as the GMob exclusion that you see in Settings > Content exclusions in the image above. And Google dares to suggest that it “simplifies” matters for advertisers. But since the message warns about a spike in mobile apps traffic, there is a good chance this traffic will be wasted spend, in my experience.

How to prevent it? The only surefire solution is to exclude mobile and tablet traffic entirely from your GDN campaigns. That’s not ideal.

The announcement is very recent, and there seems to be confusion even among Google employees. If you’re not willing to turn off mobile and tablet placements entirely, definitely keep a close watch on your campaigns come September 1.