Google announced last week that it is retiring Google Reader, its longstanding RSS feed reader application, citing a decrease in use. The announcement created a furor across the Internet. 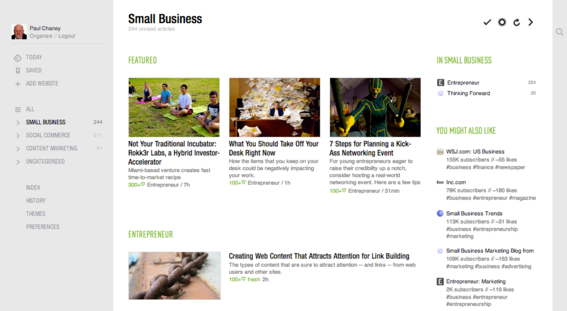 More than 500,000 Google Reader users have moved to Feedly.

According to Feedly’s blog, more than a half million Google Reader users have transitioned to Feedly, making it the most popular reader on this list.

Importing Google Reader feeds into Feedly is easy enough. Simply log into Feedly using your Google account and it will automatically sync your feeds. 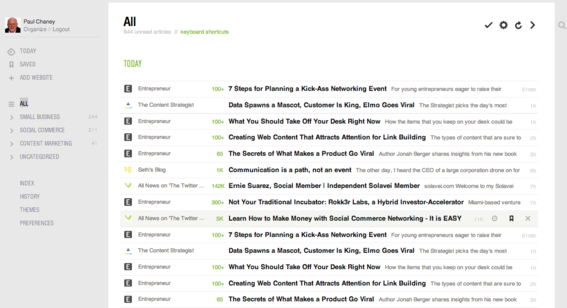 A condensed version of the interface resembles Google Reader.

Feedly offers a more visual interface than Reader. However, clicking the “ALL” link presents a condensed version that lists headlines from feeds to which users have subscribed, organized in reverse chronological order.

With the huge influx of Google Reader users, Feedly will likely create a more familiar interface.

Feedly is multi-platform and has versions for iOS, Android, Kindle, Chrome, Firefox, and Safari. 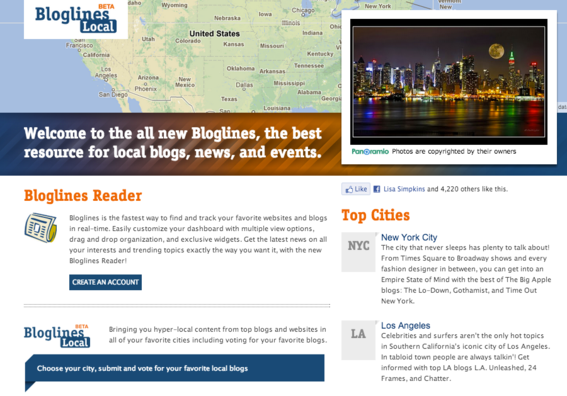 Created in 2003, Bloglines, owned by MerchantCircle, is a feed reader that predates Google Reader by two years. Its interface closely resembles Google Reader, so users should be able to adapt quickly. 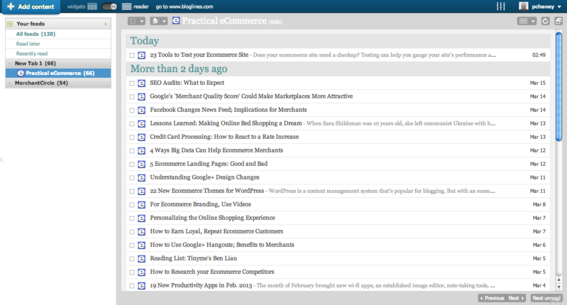 Unlike Feedly, Bloglines has made no apparent effort to reach out to Reader users and create a simplified migration path. Users will need to manually import feeds. Alternatively, feeds can be added using the “Add Content” mechanism. 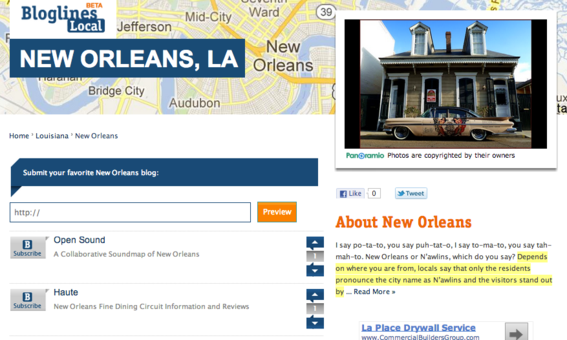 A unique feature is Bloglines Local, which presents hyper-local content from many cities across the U.S. For example, a click on “New Orleans, LA” takes users to a page that contains a list of local blogs, recent tweets, business services by category, and upcoming events.

FeedDemon is an RSS feed reader for Windows.

FeedDemon is popular reader among Windows users. It also synchronizes with Google Reader, so migration should be seamless.

Additional features include: keyword tagging of feeds, watches of feeds where keywords appear, feed search, and automatic download of podcasts, which can be copied to an iPod, iPhone, or other devices.

FeedDemon is not web-based and must be downloaded to a user’s computer. 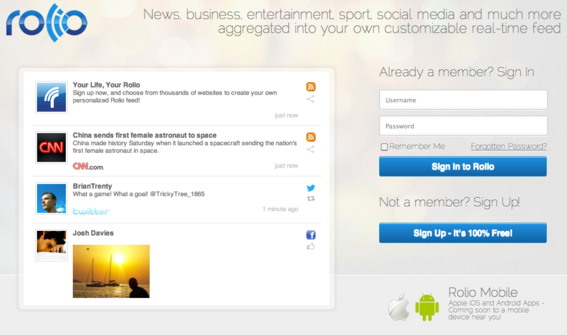 Rolio finds news and information based on category.

Rolio is not a feed reader in the traditional sense. Rather, it surfaces news and information from different categories including Business & Finance, Politics, Science, Technology, and others.

Rolio users can create a personalized list of feeds.

However, users can create a list of feeds by clicking the “Can’t find what you’re looking for?” link located in the upper right-hand corner of the interface.

Users have the option to enter an RSS feed URL or a website address and Rolio will attempt to find the feed. 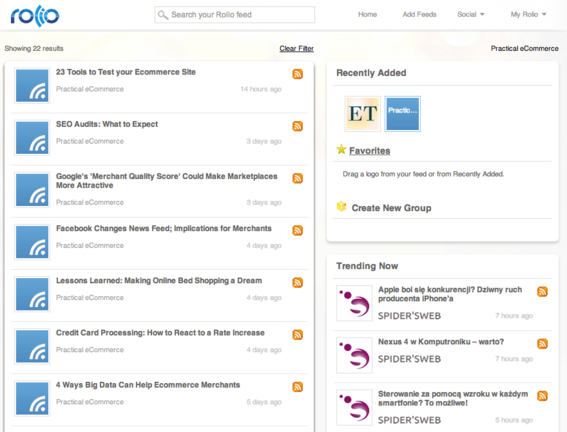 Logged in users will see a list of feeds to which they have subscribed, along with trending feeds. They can also “favorite” feeds and create a group of feeds based on a topic or category. 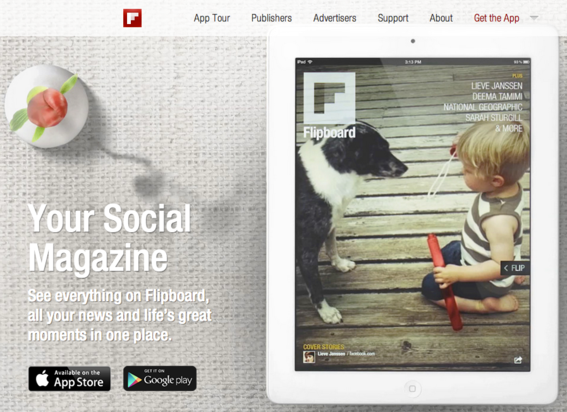 Flipboard is designed for use on iOS and Android devices.

Already popular with iOS and Android users, Flipboard pitches itself as a “social magazine” that presents news and information in a magazine-style format. Just like the other readers on the list, any RSS feed can be included.

Flipboard’s user interface is “designed for intuitive flipping through content,” according to Flipboard’s Wikipedia entry. When the application is opened, the first page presents a visual list of content to which the user has subscribed.

Smartly, Flipboard has made overtures to Google Reader users and provided a two-step process to import feeds. 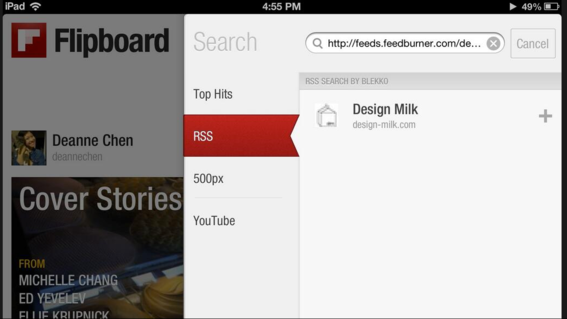 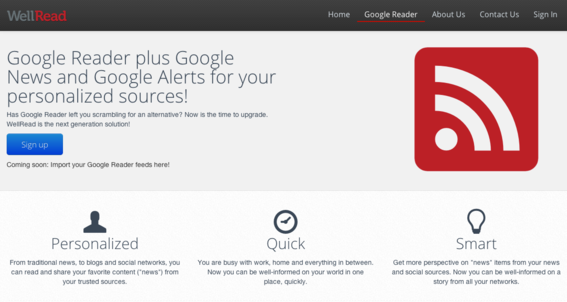 A new entry is WellRead. Not only does it pull together content from news and social sources such as Twitter, LinkedIn, and Facebook, its algorithm is designed to surface what is trending and identify what it believes is most important for users to read.

Access to the site is available by invitation only.

These are just six of the many RSS readers that are suitable alternatives to Google Reader. Wikipedia has a more extensive list. In addition, some social media management applications such as Sprout Social and HootSuite offer RSS feed reader capabilities.

Google Reader is scheduled to be discontinued on July 1. So you have time to experiment with a few alternatives before making a decision. You can also download a copy of your Reader data using Google Takeout.