Following the holiday campaigns of large retail brands can be a helpful and entertaining way to generate holiday marketing ideas for your own business.

Here is a list of holiday campaigns from large retailers. All of these campaigns use multiple social networks and digital channels. Most take place primarily online, promote the campaign with hashtags, and incorporate a series of videos and contests. Some try to amplify shopping excitement, while others emphasize seasonal themes like family, togetherness, and the spirit of giving. 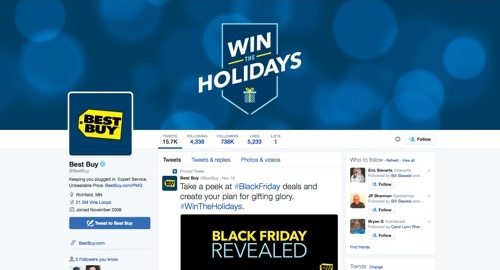 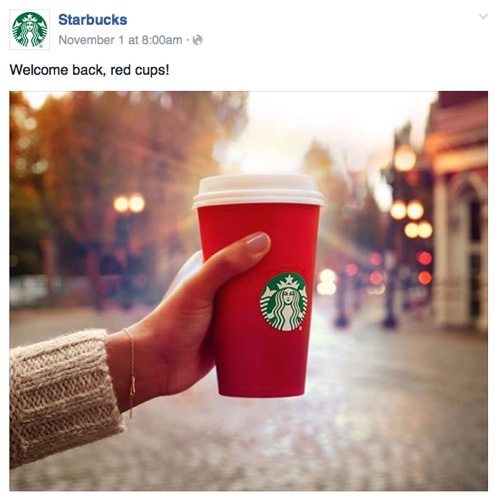 The success of Starbucks can be seen in the promotion and buzz surrounding its holiday items, particularly in the current chatter surrounding this year’s secular red cup design. Within the first 48 hours of red Starbucks cups launching last year, a photo of a Starbucks holiday cup was shared on Instagram every 14 seconds.

This year, customers can once again participate in Starbucks’ Red Cup Contest on Instagram by snapping a photo with their red Starbucks cup and uploading and tagging it #redcupcontest for a chance to win a Starbucks gift card. On Twitter, holiday tweets feature a red holiday cup emoji hashflag appearing after the hashtag #RedCup or #RedCups.

This year’s holiday campaign from Toys”R”Us is an integrated digital, television, and print campaign called “Awwwesome.” The campaign features a series of #AwesomeMoment images and videos that reveal what goes on in toy land at night, when a store closes for the day. Fans can watch as their favorite toys release each other from their packaging, while showcasing their unique features and personalities. Content is distributed on the company’s social media channels including Facebook, Twitter, Instagram, Snapchat, and YouTube. 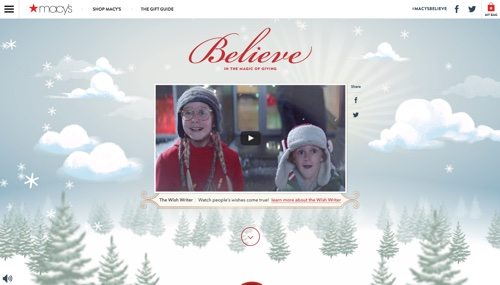 Macy’s has launched its eighth annual Believe campaign with a video that introduces Macy’s Wish Writer app and teaches children the importance of giving to others. From November 6 through December 24, children can visit their nearest Macy’s to drop their letters to Santa into big red letterboxes, create and send letters with the Wish Writer app, or send letters to Santa through Macys.com/believe. For each letter collected, Macy’s will donate $1 to Make-A-Wish.

Target’s holiday campaign centers on The Holiday Odyssey, a free digital children’s storybook, narrated by actor Neil Patrick Harris. Holiday toys — such as Minions, Elmo, and Barbie — help three kids to relight a magical tree. The story includes five video spots in an ongoing narrative to be released throughout the holiday season. The campaign also features a wish list app and a wonderland store environment in New York.

Lands’ End ‘We Believe In You’

“We Believe in You,” this year’s holiday campaign from Lands’ End, is a multimedia work from American photographer Bruce Weber. The campaign portrays the heartfelt moments and connections of multi-generational families and friends. Bruce Weber has worked for Vanity Fair, Vogue, GQ, and other publications. #‎LandsEndHoliday also includes additional promotions, like a sweepstakes for a chance to win a $2,000 shopping spree.

Kohl’s holiday campaign, “All Together Now,” is a series of videos from various members of one multi-generational family tree. The campaign includes eight spots, showing how Kohl’s brings modern families together in unexpected ways. The first spot of the campaign is receiving some additional attention. In the clip, a family gathers around a table and a same-sex couple stands and shares a toast with the family. The video has nearly 300,000 views on YouTube. Kohl’s is also posting a storytelling truck in Times Square where families can share their traditions via social media. 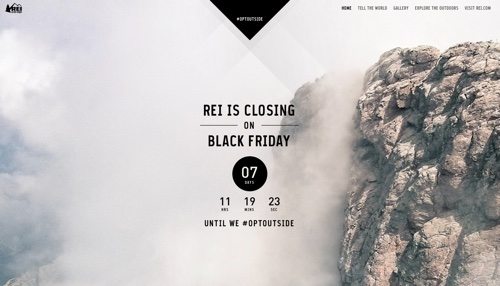 REI has launched perhaps the most unusual campaign of the holidays, offering a unique alternative to Black Friday. Posting with the hashtag #OptOutside, REI has announced all of its stores will be closed the day after Thanksgiving and only a few employees, relatively, will oversee the website. Employees will be paid for the time off, and everyone is encouraged to head outside.

In a video posted on YouTube, CEO Jerry Stritzke explains the company’s outlook, advocating for time in the outdoors, rather than the isles. Customers can learn more and share their plans at OptOutside.REI.com.