After we published that article, California enacted a law requiring all ecommerce vendors to collect sales tax, effective July 1, Amazon terminated all its California affiliates and started collecting signatures to put a referendum on the ballot in 2012 to ban collection of sales tax on online sales in California. In less than three months Amazon spent $5.25 million, according to state records, to stop the law. Fearing that the passage of such an initiative could prevent the chances of it ever collecting sales tax from online sales, California started negotiations with Amazon.

In exchange for the reprieve, Amazon has pledged to create at least 10,000 full-time jobs and hire 25,000 seasonal employees in California by the end of 2015. This will generate an estimated half billion dollars of capital investment in California. Amazon will also drop its referendum challenge. Any sales tax collected by sellers between July 1 and September 23 — when the original bill was signed — will not have to be remitted to the state.

The new law will apply only to cumulative sales in California by any one seller in excess of $1 million. The previous law had a cumulative cap of $500,000. The text of the new law is available here, in PDF form.

Amazon will also reinstate its California affiliates, estimated to number between 10,000 and 20,000. When Amazon cut off its affiliates, major chains such as Best Buy and Walmart reached out to them, and asked them to join their respective affiliate programs.

In March, Illinois — the home state of Senator Richard Durbin, sponsor of the “Main Street Fairness Act,” which would impose sales tax on all Internet sales — implemented a law similar to California’s. The national bill, introduced in Congress in July now has support from Amazon as well as major national retailers such as Sears and Walmart. While no date has been set for this legislation to come to a vote, the fact that sales tax on online sales will take effect in California next year if Congress does not act, will give Amazon a reason to actually lobby for it. Now Amazon is allied with its adversaries, major brick and mortar retailers, that have been calling for online sales tax for years.

Amazon Vice President for Global Public Policy Paul Misener wrote a letter — a PDF copy is here — to Senator Durbin stating, “Introduction of your bill returns the discussion of interstate collection of sales tax to Congress, which the Supreme Court says is the appropriate forum to resolve the issue. Amazon looks forward to working with you and your colleagues in Congress to help enact sales tax collection legislation.” 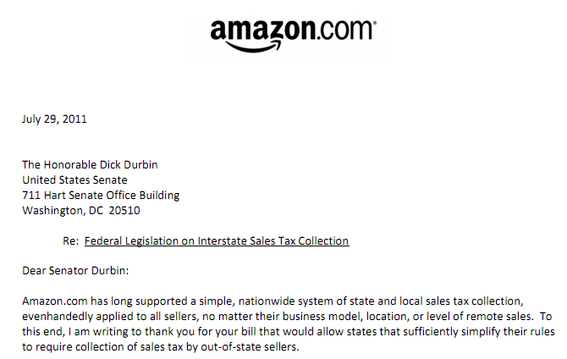 An Amazon executive, Paul Misener, wrote a letter to Sen. Durbin expressing Amazon’s support for his proposed “Mainstreet Fairness Act.” Click on the image for a full PDF of the letter.

The Main Street Fairness Act would:

The text of the proposed Main Street Fairness Act is available here.

Why Would Amazon Relent?

Amazon has long stated that it supports the collection of sales tax by online merchants; it objects only to the administrative costs involved in collecting thousands of different rates for states and localities across the country. But large brick and mortar stores that sell online deal with that burden everyday.

Several very populous states have been in the forefront of the effort to collect taxes, as cash-strapped governments look for new revenues. Amazon already collects sales tax in New York although it is still fighting that law in court. It also collects tax in its home state of Washington, as well as North Dakota, Kansas, and Kentucky — four states where it has warehouses. Amazon is currently using the tactic of negotiating with individual states that are considering a sales tax on online sales, offering distribution centers and jobs in exchange for no tax on online sales. This piecemeal approach is precisely what Amazon says it does not want.

While stating publicly that it supports uniform tax collection, Amazon has been building warehouses in various states and then turning them over to third parties to operate, thereby skirting the nexus law. In some cases, Amazon owns the warehouses and still refuses to collect sales tax. Last year the Texas Comptroller sent Amazon a bill for $269 million for four years of back sales taxes, based on the location of an Amazon warehouse there. Amazon responded by closing the warehouse. If Amazon shuts warehouses in populous states where they presumably rack up a lot of sales, shipping costs will increase.

With Amazon onboard, national legislation has a better chance of passing next year, making out-of-state sales tax collection by ecommerce merchants a reality. However, the law may not become effective immediately.