Customer concerns, complaints, and problems give online merchants an opportunity to build lasting customer relationships and boost word-of-mouth marketing. Providing super customer service can make your business a hero to your customers.

The classic “Adventures of Superman” television show aired from 1952 through 1958. It had a memorable title sequence. “Faster than a speeding bullet. More powerful than a locomotive. Able to leap tall buildings in a single bound. Look! Up in the sky. It’s a bird. It’s a plane. It’s Superman.”

Turns out that Superman, and a few other classic superheros, can help make great points about providing excellent customer support.

The Man of Steel, as Superman is sometimes called, is best known for his strength, invulnerability, x-ray vision, and powers of flight. But for customer service, it is one of his other abilities that should come first. He has super hearing.

Superman can hear everything from dog whistles to softly spoken words a mile away. He has the uncanny ability to isolate all of those sounds so that he can zero in on what matters.

Recently, Ron Burley, a consumer advocate and entrepreneur, wrote in Inc. magazine about a customer service experience that earned his company $4 million in new business. Like Superman, Burley’s secret had been that he listens well and is willing to help a customer in need.

Burley, who owned a company that made software for radio stations, received a customer service call on his personal phone at 2 a.m. on a Sunday. The customer, Bob, owned a small Midwest radio station and was very new to computers. He actually needed help that had to do with Microsoft Windows settings — not so much Burley’s software. Nonetheless, Burley spent two hours on the phone with Bob.

Six months later, Bob’s radio station had been purchased by a large chain of radio stations. Bob, impressed by how well Burley had listened and helped, recommend the software for all of the chain’s stations, generating $4 million in new business for Burley’s company.

It is surprising that Superman is a hero at all. Given his capabilities, why would he help mankind instead of ruling it? The answer that emerges from the pages of Superman comics is that he empathizes with people. That is an essential trait for customer service too.

Empathy lets customers know that you really care about their problems and want to do your best to make things right, whether or not it is your fault.

To illustrate, consider the example of Trader Joe’s, a chain of specialty grocery stores, as described on Reddit, at “Trader Joe’s Did Something Awesome.” It shows just how far empathy can go in customer service.

In the winter of 2009, a woman became concerned about her 89-year-old father who lived on his own in an apartment in Pennsylvania. The man was a World War II veteran and retired engineer who didn’t get around very well. When a snowstorm forced him to stay in his home, the women, who did not live nearby, worried that he would run out of food. She called several stores hoping someone would deliver some groceries to her dad. But given the snowstorm and that grocery stores just don’t do that sort of thing, she wasn’t getting any help.

Finally, she reached Trader Joe’s, a chain of specialty grocery stores. It doesn’t normally deliver either, but the employees there empathized with the woman’s concerns, and offered to bring her dad the groceries. What’s more, they wouldn’t let her pay for them. It was their “Christmas gift” to her and her father. The Trader Joe’s folks had the food in the fellow’s hands in just 30 minutes.

Trader Joe’s act of service paid off in terms of marketing too.

It turns out that this man’s grandchild is a frequent contributor to Reddit, who posted the account of Trader Joe’s empathy on the popular social sharing site.

The post received 558 comments and 3,898 up votes from the community. It was also referenced in an American Express Open Forum post titled, “Ten Examples of Shockingly Excellent Customer Service.” No doubt this exposure has helped Trader Joe’s reputation. 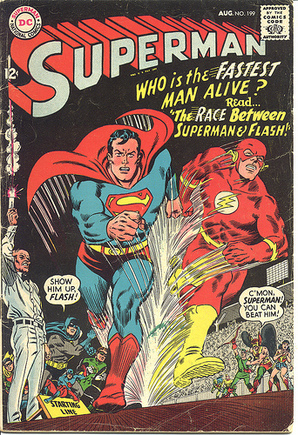 Superman and Flash are the two fastest superheros.

Superman is said to be “faster than a speeding bullet.” In fact, Superman’s speed is said to rival another class superhero, Flash.

Speed is also very important in customer service. When shoppers send an email, fire up a chat session, or make a phone call, they want immediate relief for some problem. Good customer service will address this need and do everything possible to solve the issue fast.

Recently, a retailer in the Northwest received a complaint from a customer who had ordered jeans online for her husband, but had reversed the waist and inseam dimensions. Instead of a 36 x 30, the customer had ordered three pairs of 30 x 36.

Although the customer had actually ordered the wrong size, she initially blamed the retailer. The retailer responded by sending out the new size overnight at no additional charge, and actually making a change to the website to make the options more obvious. The change to the site was made while the complaining customer was on the phone, and she got to approve it.

She placed a new order with the retailer in less than a week.

In this case, the retailer was quick to make amends and make changes, but speed can actually take some unexpected forms too.

In 2011, marketer Derek Halpern related an experience he had with the customer service team for Brita water filters.

Halpern had purchased a water filter only to discover that it didn’t fit his faucet. Ready to return the item, Halpern called the Brita customer service department.

“Once I described my problem to the helpful Brita customer support rep,” Halpern wrote, “she offered to send me some attachments that would allow my filter to fit on my faucet. The best part? It was absolutely free. I didn’t even pay shipping and handling.

“I couldn’t help but think there was a catch, but there wasn’t. They didn’t even verify my purchase.”

Here the speed came in the form of being streamlined. Brita didn’t ask Halpern a bunch of questions about his purchase. There was no request for proof of purchase. The employees there didn’t make Halpern complete a return authorization request, which is common on ecommerce sites. The Brita customer service folks just responded.

Being a customer service superhero may be as simple as listening to customers, empathizing with them, and quickly working to find a solution to whatever problem the customer may have.

The benefits of providing heroic support may not be immediately obvious, but doing the right thing has a way of working out in the end.