Most customers can deal with miniscule shipping mistakes. The majority are forgiving when damaged shipments are quickly addressed or replaced, and most will even return shop if their issues are fixed expeditiously.

But what if the order is never fulfilled due to lack of inventory?

Last month HP discontinued the TouchPad — the company’s tablet that runs on the webOS operating system. Overnight, the 16-gigabyte version went from $399 to just $99. Both techies and not-so-savvy users rushed to brick and mortar stores and online venues to get a killer deal. Most of the big guys had it up for grabs — Amazon, Barnes & Noble, Office Depot, and Best Buy websites were inundated with so much traffic many complained they weren’t able to get the stores to load in any browser.

Just as soon as the excitement started, however, angst kicked in. Despite stores listing the devices as being in stock, within days consumers of some stores — most notably Amazon and Barnes & Noble — received emails saying the units were oversold. 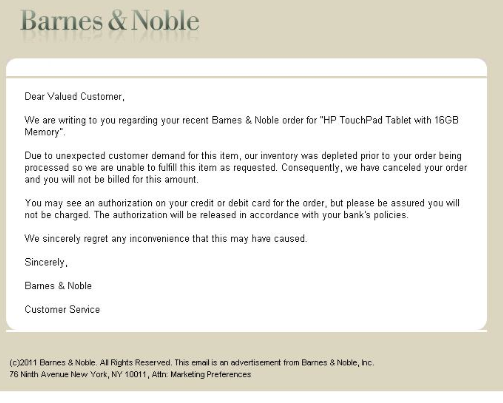 Thousands of Barnes & Noble customers received a simple, apologetic email saying inventory was depleted. Many were irritated over the use of the term “unexpected demand,” as the flurry of consumers seeking the deal was not a shock to the industry.

The HP TouchPad sales fiasco wasn’t an issue of a few stores overselling by a handful of units, though. Reportedly thousands of consumers received the “sorry, but…” message, myself included. Though canceled orders placed at Amazon were the result of third-party merchants feeding inaccurate stock counts, B&N took the prize for being the most misleading; consumers just as quickly began receiving sales pitches for the Nook and other competing products. 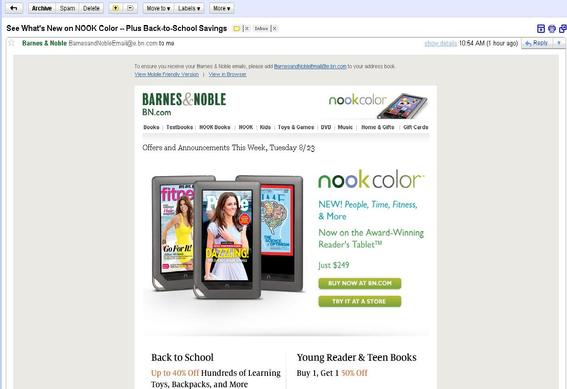 Within 24 hours of receiving cancel notification, thousands of customers — many of whom say they never signed up for Barnes & Noble’s mailing list — received non-discounted sales pitches for the Nook

It’s not uncommon for companies to streamline web pages by disabling dynamic features, including live display of stock availability, in order to keep the doors open to high-volumes of traffic. Such actions, however, are often coupled with live-scanning of orders as they arrive so as to minimize overselling.

How can you avoid widespread customer complaints — such as this one at Groupal, the consumer complaint site — like B&N is still experiencing?

If you oversell an item, be sure to address the issue professionally.

What Not to Do

While scores of online stores victimized shoppers by selling them TouchPads they didn’t have, B&N is the prime example of what not to do. During the sales blitz, the action by consumers was more about finding the product than being loyal to a specific store that might not have it in stock. Still, the company stood to gain new and recurring customers by first disclosing availability and, in the worst case, by addressing the issue quickly and with understanding.

Herb Parsons, a savvy online and offline shopper said he’d never purchased from B&N’s online store much, but had frequently spent money in-store. Like many, he was irritated by the misleading stock availability, as well as the company’s “questionable” efforts to convert him to a Nook.

“I guess B&N’s attempt and BS [sic] just won Amazon online some more business,” Parsons said. He’s an avid book reader and once owned a retail store. “I always remember that it costs a lot to get people into a store… and takes very little to convince them not to come back.”

B&N has likely lost thousands of potential customers over inaccurate inventory control. Such sales will likely be recovered by its competitors, both big and small.