When Google introduced its Chrome web browser in September, it fired the first shot in a new browser war, challenging Microsoft’s supremacy, frightening its open-source ally, Firefox, and initiating a race toward better usability and more features.

To be fair, there had been plenty of browser skirmishes underway before Chrome, as Mozilla.org’s Firefox 3.0 challenged Microsoft and gained significant market share against the multi-billion dollar corporation.

But Google, with its massive following and deep pockets, changes the game—or the war—with each action. Now skirmishes will become full blown battles in future browser versions.

As combat begins in earnest, it’s important to know a bit about the browsers that will be doing the fighting, so what follows is the first installment in a series. Each article in this series will provide an assessment of the top browsers available to users. For each browser there is a general assessment, a usability review, and a recommendation. Over the next several weeks, you’ll find reviews for Internet Explorer, Firefox, Chrome, Safari, Camino, Opera, Maxthon, and the forthcoming Internet Explorer 8.

Today, we start with the most popular and, therefore, leading web browser, Internet Explorer.

Internet Explorer: Totalitarian or Protector of the Proletariat? 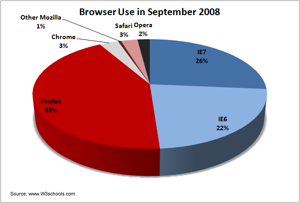 Microsoft Corp.’s Internet Explorer (IE) browser has been the most popular, most used web browser for more than a decade. In September 2008, 48.6 percent of all web surfers used IE compared to 42.6-percent of users for nearest competitor, Firefox, according to w3schools.com. But the numbers are not everything they might seem. Internet Explorer’s user-base was split between version 6 and version 7, which could be an indication that half of its “customers” have not upgraded in more than two years.

Many slow-to-change corporations have been reticent to migrate to Microsoft Vista, Office 2007, or IE7 and are still using the older IE6 browser. This means that up to half of IE’s users might be corporate captives, who would perhaps use another browser if they could. A fact that does not bode well for IE in the browser wars.

In general, IE6 has three big problems— compliance, bugs, and features—that make this popular browser a poor choice for viewing web sites and clearly puts it in the totalitarian category as it restricts what users see and ignores the needs of its people.

Usability: IE6 is Not Compliant

The World Wide Web Consortium (W3C) is the nonprofit body that brings member organizations, a full time staff, and the world’s web community together to develop web standards. These standards seek to improve user experience and make it easy to create consistent web pages. Unfortunately, Microsoft and IE have a history of not complying with W3C standards. Instead, IE6 sought backward compatibility, rendering web pages as earlier IE versions had instead of meeting a mutually agreed upon standard.

Basically, someone using IE6 will not necessarily see what a web page designer intended when they visit a web site.

Imagine if book stores did that. An author writes a book using all the normal rules of grammar. The book’s editor makes sure that every punctuation mark is used properly in accordance with the agreed to standards. But then the clerk at the bookstore decides that we should be capitalizing the last word in the sentence instead of the first, and sets to marking up the book. Stupid right? Welcome to IE6.

This propensity to ignore standards has really upset the web community. For example, consider the Future of Web Design (FOWD) trade show website. The show brings together some of the Internet industry’s most forward-looking pioneers, but it refuses to support IE6. In fact, if you browse to Futureofwebdesign.com with IE6, you’ll see a message reading, “Hey, looks like you’re using internet explorer [sic] 6. I’m afraid we don’t support this browser. Try using Firefox or Safari.”

Nothing like having web developers point your users to the competition.

Need a specific example? Consider this bit of W3C compliant code from a web designer’s site. 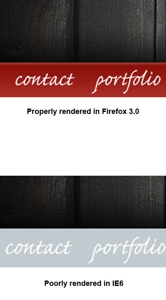 The good news is that Microsoft has seen the light to some extent. IE7 is significantly more compliant than IE6 was, and the beta version of IE8 seems to hit the W3C mark even more often than IE7 did. But remember, approximately half of IE users are IE6 users.

New York City with its famously large cockroaches has nothing on IE6 where bugs are concerned. In particular, IE6 mangles positioning. The folks at Positioniseverything.net have cataloged many of these quirks, including “the Peekaboo Bug” that causes text adjacent to floating boxes to vanish and reappear; “the Expanding Box Problem” wherein IE6 ignores dimensional restrictions; and “the Double Float-Margin Bug” that has IE6 multiplying margins around floating elements.

IE 6 makes transparent PNGs ugly. Portable Network Graphics or PNGs allow web developers the greatest amount of creativity and flexibility available. This powerful graphics format is smaller than GIF, has better fidelity than JPG, and offers alpha-channel transparency that is second to none. PNGs are the best graphic format for many web sites and increasing web designers are willing to tell IE6 users to go packing rather than surrender the ease of implementation that PNGs offer.

Unfortunately, the 22.3 percent of web surfers who used IE6 in September 2008, did not see properly rendered PNGs. Again, consider the Future of Web Design website. Rendered in IE6, many of the site’s graphics are surrounded by gray boxes—a result of IE6’s feeble image support.

Mishandling PNG files was enough of an issue that Microsoft made a point of correcting it. And IE7 does support “transparency within the PNG image format, resulting in better-looking websites that are simpler to build,” explained Microsoft on its official website.

Introduced in 2006, Microsoft IE7 corrected many of IE6’s problems.

“These improvements address many of the inconsistencies that can cause web developers problems when producing visually rich, interactive webpages [sic],” Microsoft said. Aside from correcting many woes, IE7 offered some solid improvements. 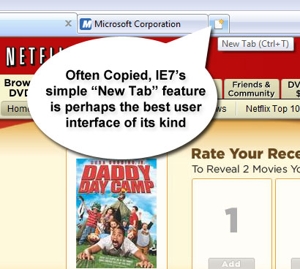 View lots of web pages in one browser window. In IE7, Microsoft adopted tabbed browsing or the concept that new web pages would open inside of tabs not windows. Tabs are considerably more effective and easier to navigate.

Although, IE was very late to the tab game, its “new tab” button was perhaps the best user interface to date. The “new tab” rests just to the right of a user’s open tabs and offers a one-click way to open a new blank tab. The feature is so easy and so popular, that developers have created a copycat “New Tab Button” plug-in for the competing Firefox browser. You’ll hear more about tabs and various tab features throughout this series since these are now a de facto standard for web browsing.

IE7 has a nice quick tab feature that allows users to view a thumbnail of every open page. This is a huge help for Internet power users who often have ten or more web pages open at once. This is actually a powerful and useful tool, which Microsoft may have taken from Opera.

“Tabs can be grouped and saved into logical categories, so you can open multiple tabs with a single click,” Microsoft explained. ” A Tab Group can easily be set as the Home Page Group so the entire Tab Group opens every time Internet Explorer is launched.”

Recommendation: Avoid IE6 and Get IE7 as a Second Browser

IE6 is inferior to virtually every other leading browser available today, and no one should use IE6 unless they’re forced. IE7 is a very capable browser and the best to use if you watch a lot of video on demand from sites like Netflix.com or if you use Microsoft SharePoint for work. But for general browsing, IE7 is no match for Google Chrome or Mozilla Firefox, making it a great second choice.