By some estimates, more than 1.4 billion people use the Internet for work, entertainment, or commerce. All of those web surfers must use a browser to visit websites or shop at online stores, and if browsing speed, security, and functionality matter, those users should be cruising the information super highway with the Mozilla Firefox 3 web browser.

For years, Firefox, the second most used browser in the world, has been wrestling with Microsoft’s Internet Explorer (IE) for supremacy in a sort of Internet cold war. But last month, Google released the beta version of its Chrome browser. Google’s action was the first shot in a new, more heated browser war, so Practical eCommerce began a review of the coming battle’s superpowers—the top browsers.

Last week, we reviewed Internet Explorer, which makes a great second browser. This week, we look at Firefox. And in future installments we will examine Chrome, Safari, Camino, Opera, Maxthon, and the forthcoming Internet Explorer 8.

When Mozilla, a non-profit organization aimed at promoting an open and innovative Internet, released the latest version of Firefox in June (a new version might come this week), the browser was generally dubbed the quickest available by the likes of CNET’s Seth Rosenblatt and much of the Internet illuminati. Since then, Google released Chrome, which is notably faster at handling JavaScript. While actual benchmarks are subject to much discussion, some sites still rate Firefox as the speediest for overall web surfing. A quick and non-scientific test on a Practical eCommerce staff member’s PC demonstrated that Firefox opened a series of three web pages (Practicalecommerce.com, Digg.com, and Meridianwrestling.com) only slightly faster than IE7 and as quickly as Chrome. All three browsers were within hundreds of a second of each other. So it is probably a stretch to call Firefox the fastest around, especially when dealing with the JavaScript-intensive pages that Chrome loves.

What is clear is that Firefox is not slow. This browser’s users can expect a fast surfing experience, especially when compared to older versions of Internet Explorer (IE6 still accounts for 22 percent of browser use) that are considerably slower.

Firefox has a reputation for safe browsing and includes features like malware and phishing protection, support for the Extended Validation Secure Socket Layer or EV SSL protocol, website ID on the fly (just hover on the favicon), an excellent password manager that only stores data after you confirm it is correct, and a number of powerful security add-ons. 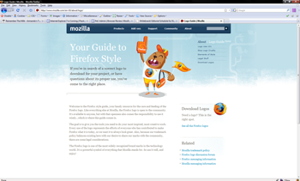 As a specific example, when you download a file via Firefox, the browser notifies your anti-virus software, so it can examine the file. And Firefox will warn you about potentially harmful sites before you click on to them.

Download Firefox and voila, you have a good —even great— browser, but out of the box Firefox would be second to Chrome in spite of cool, built-in features like the “awesome bar” that prompts users with likely URLs when they start typing a web address.

But almost no one uses Firefox without downloading several of its excellent add-ons, and it is these extensions that really separate Firefox from the crowd and keep it ahead of Google’s Chrome—at least for now. Firefox also offers user created themes for those who want their web browser to sport their teams colors or have butterfly graphics for the tool bar. Some add-ons of note follow.

The vanilla-flavored Firefox browser is not without functionality. For example, surfers can zoom in and out, use the aforementioned “awesome bar,” and have the option to save the current session before closing. And, of course, the browser does a great job of rendering web pages in compliance with web standards, a boast that IE6 and IE7 cannot make.

If there is a dark side to using Firefox, it is memory usage. As with many programs that run for hours and hours a day, Firefox can have memory fragmentation issues. When Firefox requests memory it does it in allocations of various size and at various times. As a result, it may not use memory as efficiently as other programs, actually leaving “empty” spots that are hard to access. Earlier versions of Firefox had this problem in spades and requested a lot of memory allocations. Firefox 3 does a better job of keeping memory use down (perhaps a third of Firefox 2’s demands), but will still tie up slightly more bits and bytes than some of the competition.

Netflix.com offers hundreds of videos online so that with less than a $100 investment (you can pay more if you’re not careful), folks can download videos on their computer and watch them on their television. This nifty operation still depends on a web browser though and Netflix video-on-demand service will not work in Firefox. This is bad move as far as Netflix is concerned since 43 percent of Internet users prefer Firefox, according to W3schools.com.

Firefox is fast, safe, and offers better functionality than the competition thanks to an impressive collection of add-ons and some cool built-ins. The browser is available for Windows, Mac, and Linux operating systems, and it is free to everyone. Certainly there are tradeoffs, but compared to compatibility problems and graphics support issues in IE6 and IE7, Chrome’s spying, and Opera’s propensity to crash, Firefox is the best.

Editors note: Look for our review of the Safari browser next.