Do you have a single-day sale planned for your ecommerce business? One day is plenty of time to create and execute a successful social media campaign.

Say it’s 7:00 a.m. on Cyber Monday. For your ecommerce business, this is likely one of the biggest days of the year. How do you quickly set up successful social media campaigns? Will your ads get approved in time? Can you even afford to compete in the auctions?

It’s entirely possible to do all of those things in a short amount of time. I’ve had my doubts, but I’ve also had my successes. And I’m talking successes that make my normal campaigns look like they are underperforming.

Again, assume it’s 7:00 a.m. on Cyber Monday. You have no advertising campaigns set up. You want to promote your sale on that day. You have an email campaign planned, featuring a strong image. But that’s it.

You want to launch a campaign as fast as possible. But you also want something that’s going to work. You should, therefore, target sure-fire audiences.

First, get your Facebook campaign off the ground. After that, get a Twitter campaign set up in similar fashion. But for this example, I’ll assume that Facebook is where more of your sales come from.

Setting up the Facebook campaign will be quick — just six steps.

2. Choose your sale pixel as the goal. 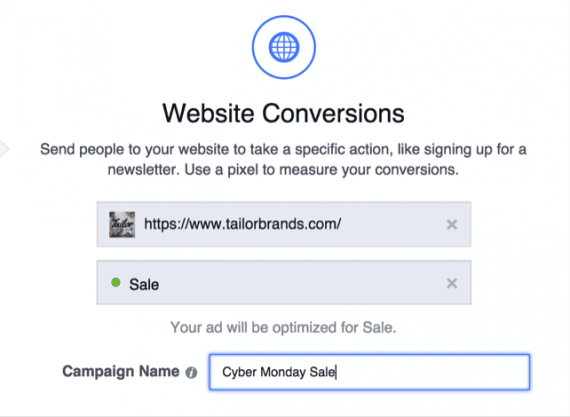 Optimize your ad for “Sale” pixel as the goal.

4. For bidding, change the optimization from “website conversions” to “link clicks,” and leave the bid amount as automatic.

For the bid amount, change the optimization from “website conversions” to “link clicks.”

5. Make sure to set the end date for the end of the day, since this campaign will just run on Cyber Monday.

6. Create an ad, place your order, and that’s it. You are all set with Facebook ads.

I suggest bidding on link clicks versus website conversions because everyone else on Cyber Monday will presumably bid on conversions. That can be a burden on Facebook’s system. Given that this is a new campaign, there will be limited data for Facebook to optimize against, which can hurt delivery times, which is important in this case. From what I’ve experienced on big holidays, especially shopping days, as well as advice from Facebook support staff, a website clicks campaign will get you in front of users as fast as possible, and assuming the offer is strong, the sales will start coming in, too.

Now for Twitter. This, too, will be a quick setup, only six steps.

2. For the dates, choose just today, since it is Cyber Monday.

3. Choose your conversion tag to target. 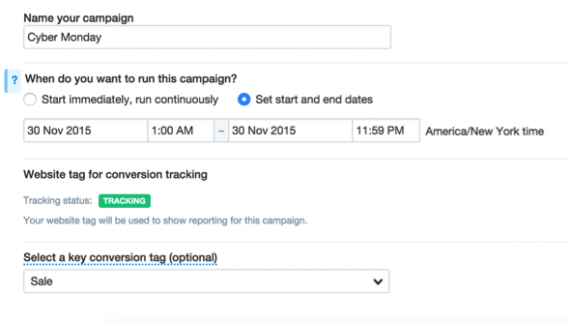 Select a conversion tag to target.

5. Change the optimizations to link clicks.

6. All that’s left is setting a budget and making an ad. Then you are set.

If you are in a bind with creative for your ads, well-designed emails can often double as images for your ads. Use images in your ads that will draw attention, but not clutter them.

Finally, when it comes to Facebook, remember 20 percent rule: Any image on a Facebook ad cannot have more than 20 percent of that image occupied by text. Facebook created a handy grid tool to help — if your image passes this tool, you can run the ad.

To be sure, waiting until the very morning of a sale to launch a Facebook or Twitter campaign is not optimal. But know that you can make meaningful campaigns on that day. Success will depend on your offer, site, and more.

Have you launched day zero campaigns? Other suggestions?