Black Friday online sales hit a record of $1.2 billion, according to published reports. But only a very small percentage of those sales could be attributed to social media, says an IBM report.

In analyzing traffic and sales from nearly 800 retailers, IBM found that only 1 percent of visits to ecommerce sites came from social networks. (To be clear, IBM’s measurements consisted of sales that could be directly attributed to traffic from social media — a “last click” from the social site to an ecommerce site.)

These findings are commensurate with a 2011 survey conducted by Practical Ecommerce, which revealed that 77 percent of responding merchants saw less than 5 percent of sales coming from social media.

If social media has little bearing on direct sales, then what purpose does it serve in the overall ecommerce sales continuum?

An article from Google Think Insights points out that social media does, indeed, play a role, albeit a supplementary one. 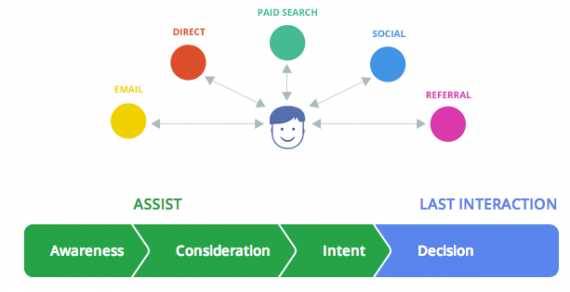 It refers to the first three as “Assisting” channels, which “build awareness, consideration, and intent earlier in the customer journey.” In each of the industries considered, including retail, social media functioned as a means to influence purchases rather than be directly responsible for them.

Despite not being a direct sales channel, social media can support ecommerce in the following ways.

Due to its viral nature and ability to quickly and easily spread a message, brands that commit to regular posting of relevant content on social sites grow their base of fans and followers, and have ongoing interaction with them should, over time, expect to see an uptick in awareness.

According the most recent Nielsen Trust in Advertising report, 84 percent of those surveyed said word of mouth was the most influential factor when deciding on a purchase. Consumer opinions posted online ranked third at 68 percent.

If “trust” is a potent factor in convincing consumers to purchase a product, through its focus on building relationships and fostering interaction, social media can serve as a channel to help consumers overcome their reluctance.

If it’s true that people trust recommendations and advice from other people online, then it behooves merchants to make a practice of hearing what these folks have to say about their brand, products and services.

“Though Google denies that +1s are an algorithmic factor in search rankings, some speculate that sharing content on Google+ has a causal relationship with higher Google rankings. As Google’s social network becomes more mainstream, we can expect its social signals to be incorporated into Google’s search algorithms,” said Kocher.

If that is the case, or soon will be, then social media participation merits consideration for SEO purposes alone.

Merchants can still utilize the channel, but have to think differently about their approach. The experience needs to remain social, interactive and contextual. They should balance promotional posts with those that educate, inform and entertain, and put the needs and interests of customers above their own.

Objectives can fall under several categories including:

These represent but a few of the ways to tie social media to sales. For more insight, read the Practical Ecommerce article, “How to Measure Social Media Marketing; 3 Steps.”

Even though social media has not proven to be an direct sales panacea, the ability to build brand awareness, overcome reluctance, increase customer loyalty, provide marketing insights, and improve SEO makes it a worthwhile channel that merchants can use to influence purchase behavior over the long term.