Ecommerce in India Takes Off; Potential for U.S. Sellers

While China has certainly been the star of international ecommerce, India — the second most populous country in the world — is starting to show some genuine energy. Even Alibaba, the Chinese ecommerce giant, is investing in Indian ecommerce companies.

The Indian ecommerce market has been slow to develop because of government regulation and a lack of Internet access for hundreds of millions of India’s 1.27 billion residents. The Indian government forbids direct foreign investment (FDI) so non-Indian companies can only operate as marketplaces for locally sourced goods. The local sellers incur the inventory and shipping costs, while marketplace operators handle technology and marketing. Amazon’s Indian subsidiary, Amazon Seller Services Pvt., launched in June 2013 and has about 6,500 sellers who have access to Amazon’s fulfillment service if they wish.

Amazon has been lobbying heavily to convince the Indian government to allow FDI in ecommerce. India’s new Prime Minister, Narendra Modi, who took office in May, has indicated he wants to open India to foreign businesses, beginning with ecommerce, perhaps this summer.

Meanwhile, Shopify, the Canada-based shopping cart, expects to double the number of stores operating on its platform in India from 5,000 to 10,000 in the next year, according to a company official. Walmart India launched a B2B online platform this month.

Local online marketplaces have a strong presence. Flipkart, India’s biggest ecommerce company based on revenue, originally modeled itself on Amazon, first selling books and then expanding to consumer electronics and apparel. It switched in April 2013 from being a retailer that sold goods on its own to a marketplace. It now has 3,000 sellers on its system, trailing domestic rival Snapdeal, which says it has about 30,000 sellers. Not surprisingly, Flipkart opposes lifting the ban on FDI. 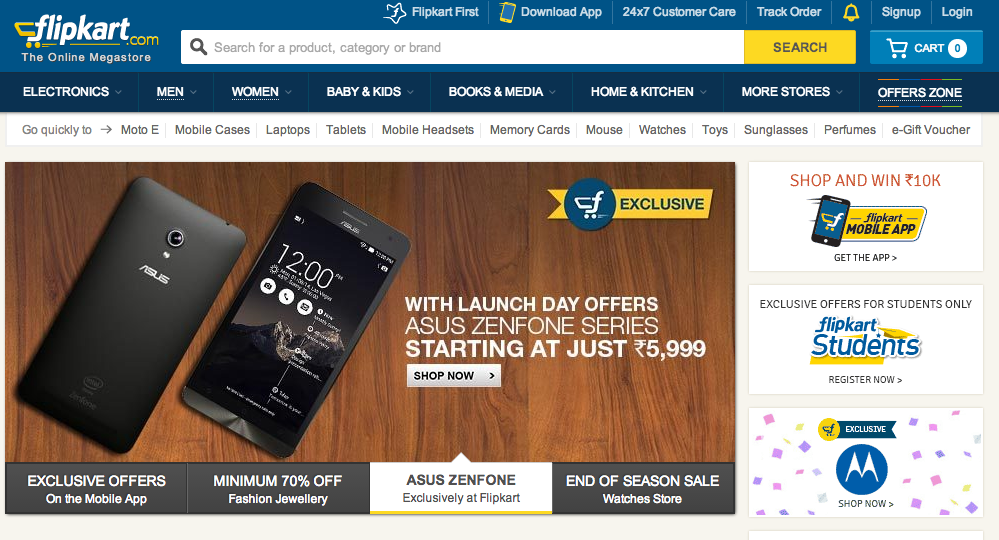 Flipkart is now a marketplace, allowing other merchants to sell on its platform.

The size of India’s ecommerce market in 2013 was around $13 billion, according to a joint report from KPMG and the Internet and Mobile Association of India. However, online travel accounted for over 70 percent of total consumer ecommerce transactions. Accel Partners, a venture capital firm, predicts that by 2016 sales of physical goods will rise to $8.5 billion and there will be 40 million active customers.

Online shopping accounts for less than one percent of total retail sales in the country. Approximately 10 percent of the Indian population buys online so there is tremendous room for growth. About 200 million people are expected to gain Internet access in the next three years. A major impediment to Internet buying in India in the past was a lack of Internet access by a large percentage of Indian citizens. A majority of Indians cannot afford a desktop or laptop computer, but they can afford a mobile phone. Tens of millions of people are upgrading from feature phones to web-connected smartphones. Marketplaces report that up to 35 percent of their traffic comes from mobile devices.

Between 2012 and 2013, the average online order value grew by 67 percent; the fashion category, a relatively new entrant, grew by 100 percent, according to Accel Partners. Very few Indians have credit cards so cash on delivery accounts for the majority of payments. However, third-party wallets are being introduced this year and will likely gain traction as a payment option.

Foreign investors hold stakes in all of the country’s biggest ecommerce companies; this financing is allowed as it is not considered direct investment — i.e., selling to consumers. Flipkart has received backing from Silicon Valley-based Accel Partners, including a recent $360 million Series E investment. Russian firm DST Global Solutions Ltd, and China’s Alibaba Group have also backed Flipkart. eBay has a stake in Snapdeal.

If the Indian government removes the restrictions on FDI, goods from sellers outside the country will be able to be sold online. Amazon would likely offer its American marketplace sellers an opportunity to sell goods in India. If that happens, the local-based marketplaces would also have to expand their assortment of goods to include foreign products to remain competitive.

Over 65 percent of the Indian population is under 35 years of age. So electronics, mobile goods, and fashion will likely overtake books as the main online sales category. This would provide a new outlet for American online merchants in a nascent but growing ecommerce market.