At a time when social media seems to be the only thing people talk about, email is still an effective ecommerce marketing tool. But merchants will have to alter how they use it if they wish to keep up with changes in how people access email messages.

The research is positive. Several brands reported an increase of five percent in open, click, and conversion rates from 2011 to 2013. The Direct Marketing Association’s 2012 Email Tracking Study reported consumers are still signing up to receive marketing related emails.

According to the DMA, consumer approval of the content of marketing emails has increased, with 25 percent saying that they find more than half of the emails they receive relevant and of interest to them. Data from email marketing provider Informz shows an increase in the click-through rate from 19.5 percent to 21.1 percent from 2011 to 2012. Informz also found that the more links an email message contains, the higher the click-thru rate. However, emails should only have one call to action regardless of the number of links. Informz also found that messages with shorter subject lines had higher open rates, with subject lines with less than 10 characters having the best open rates.

Email continues to have an excellent return on investment and is one of the most cost-effective methods of marketing. Email marketing and sales campaigns are easy to measure via open, click-through and conversion rates. Direct mail has a better response rate than email — 25 percent vs. 23 percent — but direct mail costs about 100 times as much according to the Harvard Business Review.

With automation tools merchants can reduce the amount of time spent on generating messages once the program is up and running.

What Do Customers Want in an Email Message?

People will read email messages if they think the vendor is paying attention to what they are interested in purchasing. Generic sales emails will likely not gain the notice of readers. Personalized, relevant content is essential. So behavioral targeting should become a part of every ecommerce vendor’s arsenal. Merchants should communicate with customers based on how they responded to previous emails, their website browsing patterns, and their purchase history. 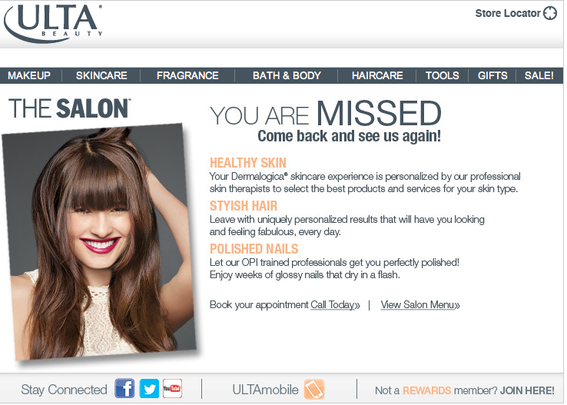 This Ultra Beauty email example tells the recipient they are missed.

Perhaps the biggest change in email is the increasing reliance on smartphones for reading email correspondence. Results of the Pew Internet and American Life Project from November 2012 showed that that 53 percent of mobile phone owners have smartphones and 56 percent of all U.S. mobile phone owners access the Internet on their mobile device. More than 50 percent of mobile users read email on their phones. Of these individuals, 88 percent check email on their phones every day.

Email testing tool provider Litmus reported in March 2013 that 43 percent of all emails were opened on a mobile device. Litmus also reports that the Apple iPhone is the most used mobile email client, followed by Outlook. Email research provider Return Path reports that Apple devices comprise 85 percent of all mobile emails opened — 59 percent on the iPhone and 26 percent on the iPad. Mobile open rates grew 300 percent between October 2010 and October 2012. Return Path’s research also shows that emails have twice as many conversions as search and social media, and the average order value of ecommerce purchases are higher for tablets and smartphones than for desktop purchases.

Layout is critical for mobile email. Merchants need to make it easy for users to open a message on their devices and take action within seconds. Using responsive design can help render emails differently for different devices and platforms. Layout should be one column, vertical, and contain large action buttons.

Provide larger font sizes and expand white space around hyperlinks to increase click-through rates, which are still lower on mobile devices than desktops and laptops. The content should be direct and concise because mobile users are multi-tasking and may be engaged only superficially. Deliver a sense of urgency in the message. Calls to action should be located within the first three lines of text.

Be sure to make it easy to unsubscribe. That way, you can concentrate on people who are interested in your messages and comply with industry standards.

Email is a much more targeted tool than social media which works best as a brand engagement method, not a marketing tool. While social media may be great for P&G, Nike, Starbucks, and other large companies, it may not be the best tool for a small company. Ideally, email and social media should be complementary. Customers should be able to share email content via social media networks and join an email-marketing list via social media. To reach beyond a customer list, consider including buttons to Like, Tweet or Pin new products and special offers.

Because of its relative low cost and high return on investment, email will co-exist with social media marketing for the foreseeable future.