Borrowing a strategy and a catch phrase from mobile applications, marketers can use social, local, and mobile (SoLoMo) promotions together to better engage customers.

The term “SoLoMo” used to refer to a mobile smartphone application that combined social networking with some form of location information. An example would be Foursquare — the geographic locator — or similar services. But more recently marketers and Internet pros — such as Shopify’s chief platform officer, Harley Finkelstein — have begun to apply the phrase to the practice of combining social, local, and mobile marketing to thoroughly connect with potential customers, in ways that so-called old media or “rusty, dusty marketing” could not hope to do.

At its core, SoLoMo marketing seeks to participate with customers in the activities they enjoy most, adding value to the experience by providing information, entertainment, encouragement, or discounts. The SoLoMo approach tends to work best when marketers are simultaneously seeking to promote their product or service and do something good for the customer. This approach may actually be more profitable than older marketing strategies.

“A mobile and social web, both on the advertising side and ecommerce side, is going to be more highly monetizable,” GreenCrest Capital Management Senior Research Analyst A. B. Mendez told Chicago Tribune. “It’s more likely to turn eyeballs and visitors into transactions and dollars spent.”

In the context of the SoLoMo marketing buzz, respected research firm Nielsen pointed out that consumers are still the most important factor in any marketing and that “an understanding of this consumer and how they are influenced by social, mobile and local experiences online is vital.” 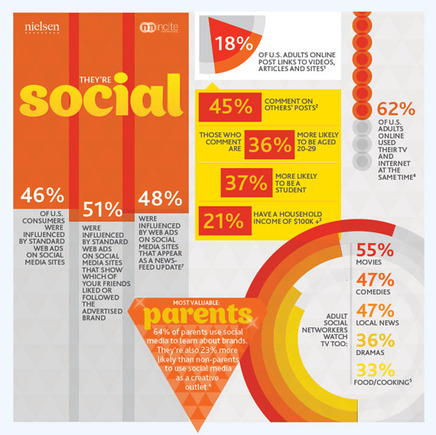 Among the data that Nielsen reported are several gems that could help ecommerce marketers with their SoLoMo marketing.

For example, according to Nielsen, 46 percent of online consumers “were influenced by standard web ads on social media sites, so that in some way simply being present on a social media site, could have a positive effect on marketing.

Separately, some 64 percent of parents use social media to research brands, so that ecommerce business selling products for children and parents should almost certainly have a social media presence and use that presence to describe its benefits.

In another report, Nielsen pointed out that 70 percent of social media users also shop online. That is some 12 percent better than the average Internet user that is not active in social.

“In the U.S., social networks and blogs reach nearly 80 percent of active U.S. Internet users and represent the majority of Americans’ time online,” Nielsen said in its Social Media Report for Q3 2011. “The value of the time consumers spend online and on social networks and blogs continues to grow, most visible through the influence on purchase decisions. For instance, 60 percent of people who use three or more digital means of research for product purchases learned about a specific brand or retailer from a social networking site.”

With some 44 percent of mobile phone users visiting social networking sites, it is often difficult to separate mobile and social, especially when tablets like the iPad2 are included in mobile. For example, 38 percent of online shoppers search for product data on a mobile phone or tablet while watching television, and 27 percent of mobile device users searched for coupons or discounts for products they saw advertised on their phones presumably on websites, in mobile apps, and as text promotions.

While the Nielsen data does not necessarily dictate the tactics that ecommerce marketers should use, it does seem to support that social, local, and mobile are channels in which consumers are active.