Three years after legislation passed, the U.S. Securities and Exchange Commission has finally approved final regulations that will implement equity crowdfunding. In the intervening period, many variations of crowdfunding have been offered, but now, for the first time, unaccredited investors can participate in funding start-ups. Portals can start registering with the SEC next January and businesses can probably start raising money in April.

How Much Can Individuals Invest?

The SEC received 480 comments on its proposed regulations and made only one change to its draft rules. Originally crowdfunding companies were to be required to provide the results of a full financial audit, which can be expensive. The final rules include an exemption from the audit requirement for first time crowdfunding issuers. Instead, entrepreneurs can provide specific information from their tax returns that have been “reviewed” by an independent tax accountant.

Instead, entrepreneurs can provide specific information from their tax returns that have been “reviewed” by an independent tax accountant.

The limit on how much a company can raise in a year remains at $1 million, a major disappointment to the start-up community. Many comments were submitted suggesting a higher limit and the SEC did state in a press release that it would eventually recommend a $5 million limit. The agency also stated that it would initiate changes that would make intrastate crowdfunding easier. While the SEC dithered over federal rules, more than 25 states have implemented intrastate crowdfunding, with many following the federal rules but several have higher funding limits and less rigorous accounting requirements.

Over the past two years, the SEC has make regulatory changes that make it easier for start-ups to raise money from accredited investors. The first change allows for public solicitation of funds on portals. SEC Rule 506, Regulation D allows general advertising for private security placements to accredited investors and up to 35 non-accredited investors who meet certain requirements. Websites, social media, newspapers, and email are methods of soliciting funds.

Many portals have sprung up, including: 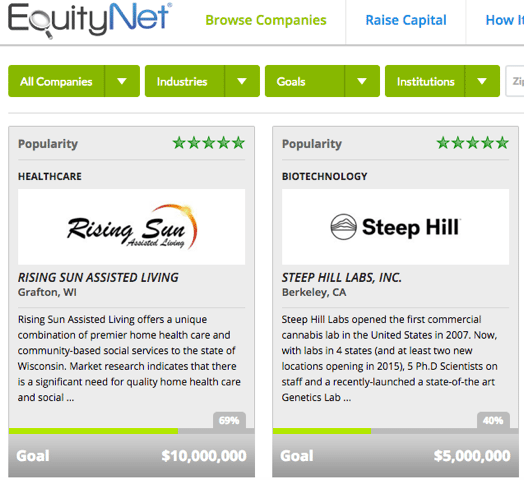 EquityNet is one of many equity crowdfunding platforms.

Reward-based. For ecommerce businesses — both merchants and software providers — rewards-based crowdfunding is a tough sell. People who donate prefer tech gadgets and creative projects. Finding rewards that relate to your business and are appealing to individuals who donate is challenging. The upside of this form of crowdfunding is that if you can make it work, you don’t give up any ownership rights to your business.

Equity. This is probably the better approach for ecommerce start-ups and established businesses. However, you will be diluting the ownership of your business with this approach.

Non-accredited investors. Crowdfunding from small unaccredited investors is certainly more democratic and you will be dealing with individuals who are not business experts. The downside is that you may be dealing with hundreds of stakeholders and that can be an administrative headache. You are limited to raising $1 million a year. This may only be seed funding and you may wish to move on to another source of funding later on.

Initially there may be a lack of liquidity, as there will be a one-year waiting period before any investor will be allowed to liquidate or sell their shares to an outside party. Even then, there will likely be limited secondary markets.

Accredited investors. The main advantage with raising funds from accredited investors is that you are not limited to $1 million annually. Fees and due diligence costs still exist, but if you are raising several million dollars, these may be a smaller percentage of the overall raise. Obtaining funds via an intermediary portal is more efficient and less time consuming than making individual presentations to one venture capital or angel investment firm after another.

AngelList is probably the most popular portal for ecommerce companies. Many individuals who have started their own companies and become wealthy are active investors on AngelList, both investing their own money and fronting syndicates.

Accredited investors may want to have more of an active role in running the company than non-accredited investors. Furthermore, they may want to get their money out in a shorter timeframe. Several companies that have been funded this way have gone on to get venture capital funding or launch an IPO.