Facebook announced in a press conference last Thursday that it has drastically revamped the all-important News Feed, turning it into a “personalized newspaper” that emphasizes what friends are sharing. 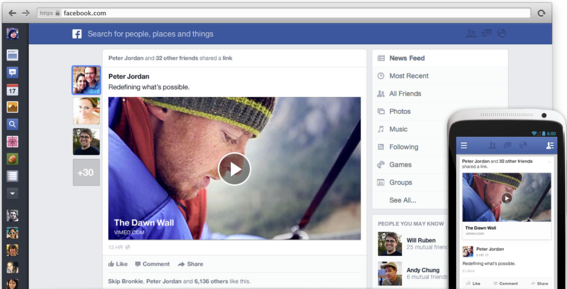 In brief, the changes consist of:

Facebook’s decision was based on three factors: Facebook fatigue, a cluttered interface, and reams of content flooding the News Feed.

Facebook fallout. Believe it or not, Facebook is experiencing user fallout at a steady pace. According to a Pew Internet report, 61 percent of current Facebook users say that they have taken a break from the site at one time or another, while 20 percent of online adults say they once used the site, but no longer do so.

More visual appeal. Facebook is also following current trends in interface design instituted by sites like Google+ and Instagram that allow for a cleaner look and less clutter. Facebook’s goal is to emphasize the content itself, not what appears around it.

Its emphasis on larger photos is also in keeping with a more visual approach to web design in hopes that such changes will foster deeper engagement.

According to sources, users will be able to switch between different feeds by clicking buttons located at the top, rather than the side column.

Here’s a detailed breakdown of what each feed contains, as reported by Facebook.

Device consistency. Facebook has designed the new look to be consistent across all devices: desktops, laptops, tablets and mobile phones. In fact, the emphasis was on mobile first and the website second. That makes sense given that more than 68 percent of users access Facebook via a mobile device.

The redesign offers a number of benefits for merchants.

There are a couple of drawbacks.

Facebook is rolling out the new design gradually, so you may not see it immediately. You can add your name to a waiting list in hopes of getting access sooner.