Although recent studies demonstrate that social media sites like Facebook work best to augment other ecommerce marketing campaigns, anecdotal data from a small Facebook ad test demonstrated that the promotion could boost both direct traffic and sales.

“In its most recent [Ecommerce Quarterly] data, Monetate demonstrates in a very definitive way that social media is not a significant source of direct traffic to ecommerce websites or purchase conversions from those destinations,” wrote marketing expert Jay Baer in the Monetate report. Baer goes on to point out that social media sites represent about 1.55 percent of all traffic to online stores and tend to have conversion rates of about three-quarters of one percent.

I tested a Facebook promoted post on May 27, 2013 on behalf of a farm-and-ranch retailer. The test produced some interesting results. This retailer had used promoted posts in the past, but — perhaps agreeing with Baer’s argument — had focused on promoting blog posts, videos, and contests.

For the experiment, I developed a post that showed a few products and pointed to a new product-closeout landing page. A total of $200.00 was invested in the campaign. 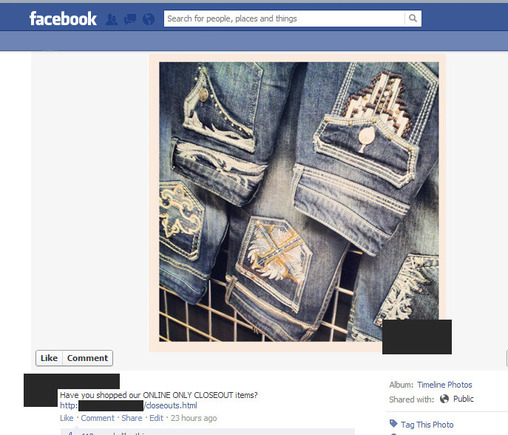 The promoted post generated a significant amount of traffic, although there were reporting differences.

According to Google Analytics, the promoted post sent some 965 site visitors. Of those visitors, 787 came from a mobile device and 178 were using a desktop or laptop computer.

The Facebook Ads Manager reported the total clicks at 2,095. The discrepancy may be a matter of how Google and Facebook are counting. Facebook is counting the click whether the visitor actually goes to the site or not. In some case, it may be that a user immediate clicks a back button or looses a mobile signal before Google can count the visit.

Most of the visitors (555 to be precise) where using an Android device, including more than 450 tablets. The post also sent 239 Apple users, including 37 from iPads. Nearly all of the desktop and laptop traffic originated from Windows devices.

There was also a seemingly related rise in traffic from Facebook that did not actually come from the ad. According to Google Analytics, an additional 3,842 unique visitors came from Facebook (but not from the ad) to the retailer’s site. These folks arrived from a number of other Facebook posts and represented more than a 1,000 percent increase in daily site traffic originating from Facebook.

The Facebook post also enjoyed a 0.75 percent conversion rate that was almost exactly what Monetate predicted. Revenues were about five times the total ad spend.

Depending on a business’s margins, investing 20 percent of revenues may be seen differently. For this retailer, it did seem to make the promoted post somewhat expensive relative to other advertising and promotional vehicles.

Taken together 292 shoppers took steps toward a long-term engagement with the retailer, which as Monetate and Baer argue in the Monetate Ecommerce Quarterly, is Facebook’s greatest strength.