A few weeks ago, everyone should have received access to a new Facebook advertising feature that could become pretty useful: Audience Overlap. It’s a feature Facebook reps have had for some time that is now available to the rest of us.

With Facebook ads, audiences are everything. That’s especially true with lookalike audiences (described below), given that they can turn a list of 100 customers into a group of more than a million qualified leads.

But what if you have two separate customer lists, turned into two lookalike audiences, with two different budgets? You would want to go after two groups, right? Often, however, you may end up competing for the same people, which could hurt you a lot more than you think regarding ad spend.

When you give Facebook a list of emails or phone numbers, you can also expand that audience. That expansion is called a lookalike audience.

You can go all the way up to 10 percent, but the number of connections between your list and the audience generated is much lower than the 1 percent. You’ll also have a much larger audience, around 19 million in the U.S., which equals 10 percent of the population.

Obviously, there are only so many Facebook users, so there’s bound to be overlap between your audiences. But there are acceptable levels of overlap. I don’t have the specific numbers, unfortunately, but, based on experience, when you approach more than 30 percent, you’re in the danger zone.

It does make sense, especially if you have a list overlap of, say, 50 percent. That means two 1 percent lookalike lists are actually just one list. If you’re segmenting your advertising by each list, that equates to a lot of wasted ad spend, something no one wants.

How to Use the Audience Overlap Tool

Now that we’ve had a brief refresher on lookalike audiences and how they can overlap, let’s take a look at the audience overlap tool interface. Follow these steps: 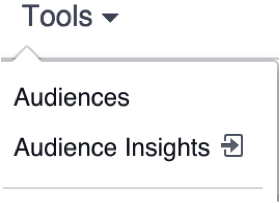 To get started with the overlap tool, you’ll have to select at least two audiences. You can do a mix of types, so you can see what a saved audience looks like when compared to a lookalike audience.

The audience overlap panel will then appear, with the primary audience listed first, followed by the comparison audiences. Note that the figures represented in this example are extremely similar, which is why you see such high numbers.

The breakdown shows the following, from left to right:

You won’t see any information if your audience has less than 1,000 people, however, as Facebook doesn’t want you to know too much about them. (It’s much easier to figure that out when the audience list is smaller.)

That’s it for audience overlap tool. You can use it before you spend a dime, to help you plan your campaigns and provide the necessary assurance that everything is on track.

Remember, some audience overlap is OK. In fact, it’s almost always going to happen in some shape or form. That is often the case when the audiences are remotely related (such as being related to your industry) or if they are within the same country, especially when you get to countries with Facebook populations smaller than the U.S. Just make sure to keep that number manageable — under 30 percent — and you’ll be good to go!

Have you used the new audience overlap tool yet? Find anything surprising about your audiences? I’d love to hear your stories. Let me know in the comments below.