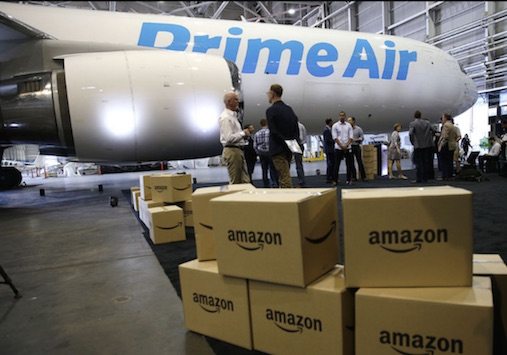 Amazon is greatly expanding its logistics capability. It has its own fleet of 40 Boeing cargo planes and it recently announced a new $1.5 billion air cargo hub in Kentucky. It is, also, experimenting with drone delivery. Image: AP.

1994. Ecommerce is in its infancy. A new company in Bellevue, Washington begins selling books online. Business analysts wonder if people will buy products online. Most people are skeptical.

2017. That company now sells 480 million products. It’s called Amazon and, not satisfied with just selling products, it now produces movies, sells services, is opening a high-tech grocery store, and is taking on entire industries including advertising and logistics.

Now one major company, which is otherwise an Amazon partner, is challenging the online behemoth in one of its key specialties — fulfillment. In February, FedEx launched FedEx Fulfillment, a service for small and medium-sized online merchants. It will serve brick-and-mortar retail stores, ecommerce merchant websites, and sellers on online marketplaces.

The new FedEx service is part of FedEx Supply Chain, a subsidiary of FedEx Corporation, and is designed to be a competitor to Fulfillment by Amazon. FedEx Supply Chain came about as a result of FedEx’s acquisition of GENCO, a third-party logistics firm in 2015. FedEx boasts that it has “one of the industry’s latest same-day fulfillment cut-off times, two-day ground shipping to the majority of the U.S. population, and the capabilities for a hassle-free returns process.”

FedEx Fulfillment provides warehousing, fulfillment, packaging, transportation, and reverse logistics, with a web platform that integrates multiple selling channels and manages inventory. The company claims that with its platform, customers will have complete visibility into their products, giving them an easy way to track items, manage inventory, and analyze customer trends.

Participating merchants will store their products at the 130 FedEx warehouses in the United States and Canada. Most shipments will be transported via two-day ground services provided by FedEx Ground. FedEx will package products in custom boxes with a brand’s logo rather than with FedEx’s logo. In contrast, Amazon’s boxes have the Amazon logo.

Offering fulfillment is a natural extension of FedEx’s business. It has the warehouses, planes, trucks, and software in place. Perhaps more importantly, FedEx sees Amazon encroaching on its core business and it needs to protect itself.

Amazon’s rapid expansion of its warehouses and expenditures on transportation vehicles has led many analysts to believe that the company’s ultimate objective is to replace FedEx, UPS, and USPS, which have been the company’s long-time shipping partners.

Amazon’s shipping costs have ballooned over the past three years, increasing from 29 to 32 percent year-over-year. In 2015, its shipping costs were over $5 billion. Its shipping costs are almost double its shipping revenues and it says that it expects those costs to continue to increase. By replacing its shipping partners with its own delivery system, Amazon is betting that it can be more efficient than experienced carriers.

Amazon is in the forefront of experimenting with drone delivery. It completed its first drone delivery last December in England. It recently announced an air cargo hub in northern Kentucky that will cost $1.5 billion. It has its own fleet of 40 Boeing cargo planes, emblazoned with a “Prime Air” logo. 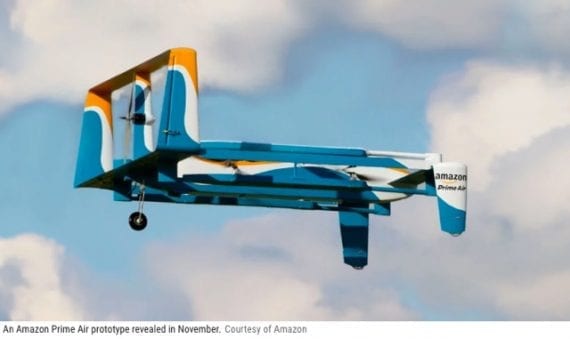 Amazon is an innovator in drone delivery. It completed its first such delivery last December in England. Image: Amazon.

The company has purchased 4,000 trailer trucks and affixed the Amazon logo to them. They will transport goods between Amazon’s warehouses and distribution centers. Amazon has also launched a shipping initiative called “Dragon Boat” that handles cargo between China and the United States. With this effort, Amazon is also taking aim at Alibaba, the Chinese ecommerce giant.

If Amazon is going to shut out FedEx, FedEx will attempt to win over some of Amazon’s shipping customers. That might be difficult because Amazon’s shipping offerings are tied in with its marketplace services and its Prime program, which offers free shipping to customers.

Larger merchants will likely stay with the FBA program, which is why FedEx is targeting smaller sellers. FedEx may have better luck with ecommerce merchants who sell the bulk of their products from their own websites.

FedEx is not a merchant. While the Amazon marketplace has high visibility, Amazon often competes with marketplace sellers, frequently undercutting them on price. Amazon can see which products are selling best, and sell those products itself, ensuring greater profitability by not stocking slow-selling items.

Amazon has access to all kinds of information about its sellers and their products, something that sellers do not always like. FedEx is not a merchant and will not compete with sellers. Amazon has raised its FBA fees and smaller merchants may no longer find the program a good choice and will give FedEx a try.