With more than 350 million active users, Facebook’s population has exceeded that of the United States. According to its statistics page, the average user spends more than 55 minutes each day on this social media site, and he or she becomes a fan of at least two pages per month.

Since Facebook opened up its platform to developers, the apps and pages available for commercial use have greatly increased in number and influence. Many online retailers have used it as a marketing technique or, in some cases, even as an online storefront in itself. There are many options for using Facebook to market your business, and in this article we’ll be looking at five examples of merchants who have used this popular social media tool to bring more traffic to their online stores. 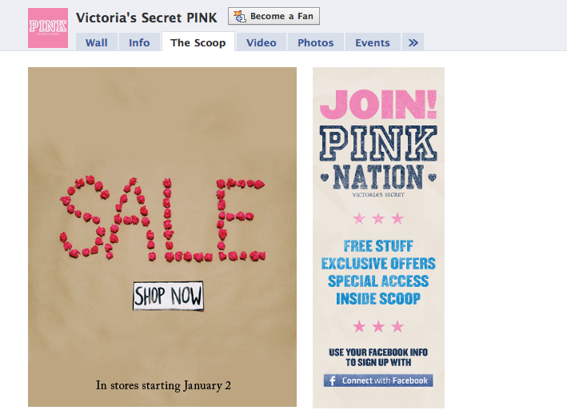 With more than 1.5 million fans, Victoria’s Secret sub-brand PINK is a Facebook juggernaut. And it’s no surprise, considering PINK’s target market is high school and college-aged women. Visit its page, and you can see the company is going all-out to project themselves as more than just a clothing brand, but a way of life. My experience as a college student confirms this—other than the school itself, PINK is plastered across more tank tops and sweatpants than any other brand on campus.

The company has made it easy for Facebook users to join their promotional list by allowing them to use their Facebook login information to sign up for “PINK Nation,” where they can receive promotional gifts and product information. By making it so easy to log in with information users have already provided, PINK has effectively streamlined its mailing list campaign.

Still, it’s not enough to get fans. Creating a Facebook page with space for users to interact beyond wall posts and comments is also important. PINK has done this by creating a discussion board and polls on their page so users can create an online community. PINK also have a feature that displays photos submitted by its fans. Facebook has many simple apps for doing this; merchants just need to make use of them. 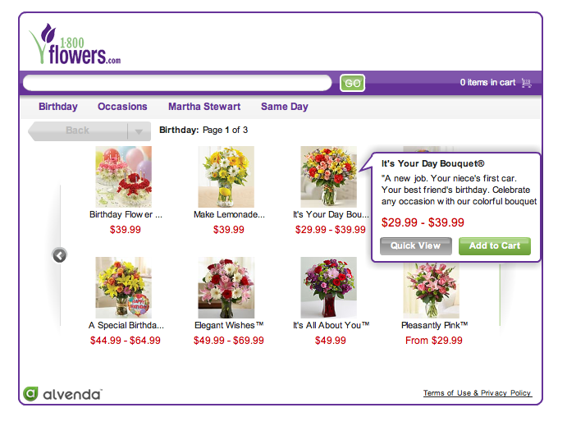 The 1-800-FLOWERS.COM Facebook page exemplifies the use of the social media site to garner traffic. Its main page has links to 1-800-FLOWERS.COM as well as to its Twitter account. It is also full of links back to the online store, and the company is consistently using status updates to inform fans of promotional contests and offers. Not a day goes by without at least one status update, and this updating is crucial to maintaining a Facebook audience.

What sets 1-800-FLOWERS.COM’s Facebook experience apart from other online retailers is that it has created an online storefront on its Facebook page itself. Users only have to click the “shop” tab to find a fairly large selection of flowers. I was impressed with the shopping experience because it gave me a delivery date estimate before I even added the item to my cart. This Facebook storefront has the same layout and functionality as 1-800-FLOWERS.COM, but with fewer SKUs. 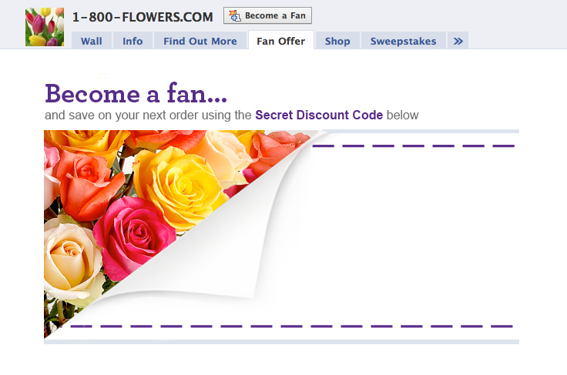 Another shrewd feature in terms of getting more Facebook fans is the “Fan Offer” app, which displays a discount code if a user becomes a fan of the page. Getting as many fans as possible is crucial to an effective Facebook marketing campaign because once users “fan” you, they will receive notifications when you update the status of your page or add new media like photos or promotional videos. 1-800-FLOWERS.COM has about 13,500 Facebook fans—no easy task. 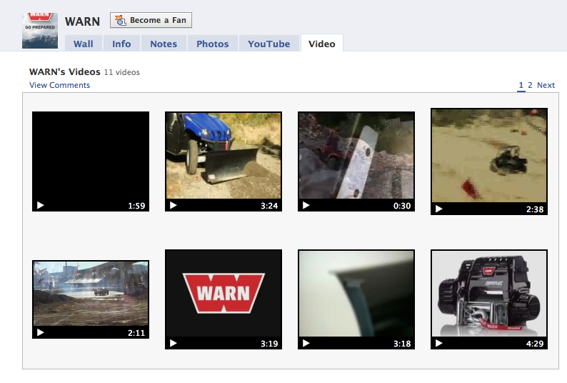 WARN designs, manufactures and sells winches and hydraulics used for extreme off-road terrain. This company helps instill confidence in its products by using the WARN Facebook page to show them in action through photos and videos.

Using the YouTube app for Facebook, WARN demos its vehicular body armor, winches and other off-road accessories out in the field. This is a good way for consumers to see that these things actually work and won’t leave them stranded in the wilderness. 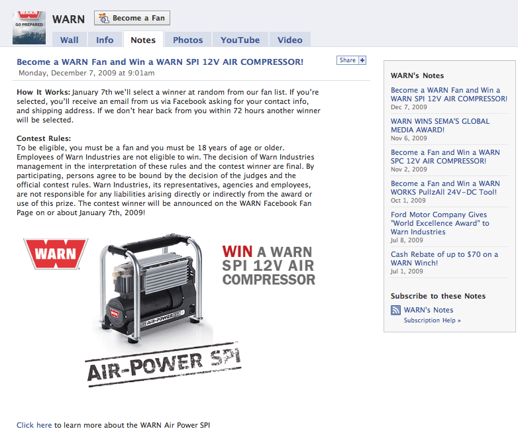 Like other fan pages for Facebook, WARN has a promotional offer for Facebook users who become fans. On Jan. 7, 2010, the company will randomly choose a person from its fan list to win a free air compressor. The “Notes” feature on Facebook is a good way to do this, as it allows a merchant to post an advertisement with photos and a link to his or her site. 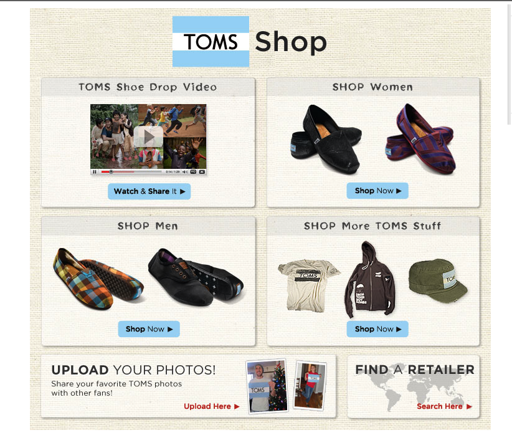 TOMS Shoes is also using Facebook to market its line of shoes. For those unfamiliar with the business model, for every pair of shoes purchased, TOMS gives a free pair to a child in need. Facebook is a good place for TOMS to post videos documenting the outcome of this giving, which is an effective way to attract customers. 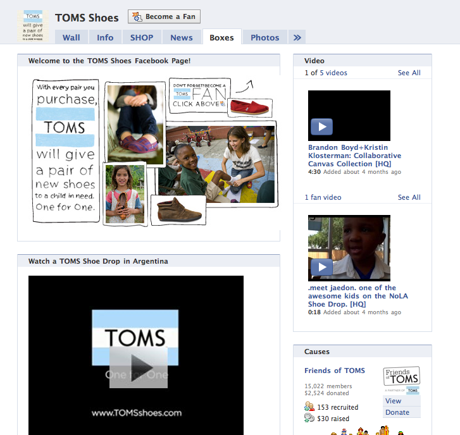 On the videos and photos section of TOMS’ Facebook page, fans can see messages from the TOMS’ team and videos of shoes being given to children around the world. Customers can feel confident that their purchases are going to a good cause, and can therefore feel better about spending $60 on a pair of canvas slip-ons. Facebook allows merchants to instill feelings of familiarity and security in their customers. By showing them images of the company following up on its “one for one” slogan, they can gain the trust of other Facebook users.

TOMS’ “Shop” tab is also excellent at directing traffic to the online store. The tabs of “Shop Men,” “Shop Women” and “Shop More TOMS Stuff” give the appearance that there is an online storefront on Facebook, but when clicked they direct the user to the men’s, women’s or other section of the main site. This is a good way to direct users from Facebook to specific landing pages instead of requiring them to visit the home page and navigate from there. 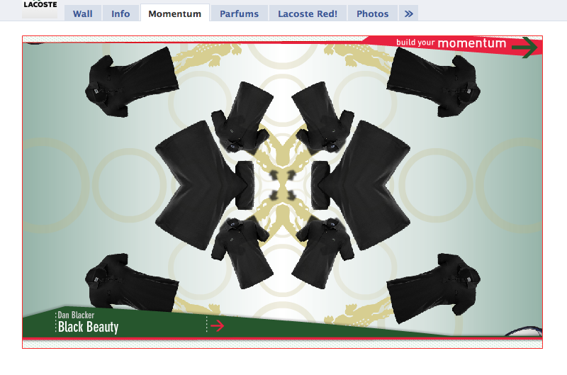 Lacoste’s Facebook page is probably the best Flash-based product showcase I’ve seen on Facebook. The fragrance company has created several apps that display its products in unusual and creative ways, going beyond Facebook’s default photo and video galleries. Click the “Momentum” tab and you see a kaleidoscopic sequence of Lacoste products set to music. You can choose different songs, which in turn display different sets of products. 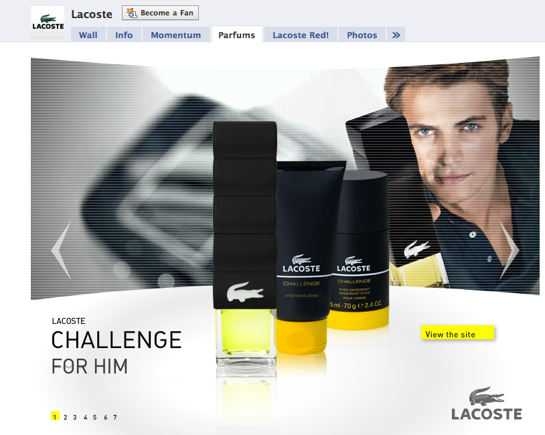 Click the “Parfums” tab, and you can scroll through different fragrances matched with color-coded model shots in the background. It looks quite a bit like a print advertising spread, but with more interaction. Each of these tabs links back to product landing pages on Lacoste.com.

The “Lacoste Red!” tab launches a photo collage with rollover graphics with pictures of models that include links to the online store. This is a very simple, yet elegant, approach to displaying products on Facebook. Small but essential details like page composition and color choice make for an impressive catalog experience.