Gearing Up for the 2010 Holiday Season

If you haven’t started thinking about the 2010 holiday season, now is the time. The economy is still shaky, customers remain fickle, and if you’re not prepared you could miss out on the most important shopping season of the year.

Thanks to technological advances, we now have more information at our disposal than ever. Unfortunately, we may not pay attention to important indicators that can help us.

Take the last two years for example. If you weathered those shopping seasons you’re probably in a good position to deal with the 2010 holiday season. If you haven’t, pay attention to what has and hasn’t worked for other retailers because the information will likely serve you well. Shoppers will once again be looking for bargains and how you market yourself will make a difference.

Big Retailers Get a Jump on Christmas

Earlier this month, Los Angeles Times reported that a number of brand-name retailers are offering Christmas in July sales. For decades, these faux holiday promotions have sparked sales in an otherwise uninspiring retail season. After all, there are no holidays between the Fourth of July and Labor Day and even those holidays are more about barbeques than shopping. Sure, there are back-to-school sales during the summer months but Christmas in July sales aren’t about school supplies.

This year, some retailers are attempting to extend the holiday shopping season by offering early discounts. For example, Sears is already selling Christmas ornaments, Christmas collectibles, and Christmas outdoor décor. 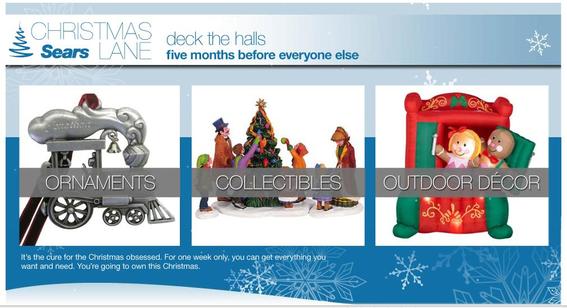 Others, like hhgregg, which sells appliances and electronics, are just trying to move product. 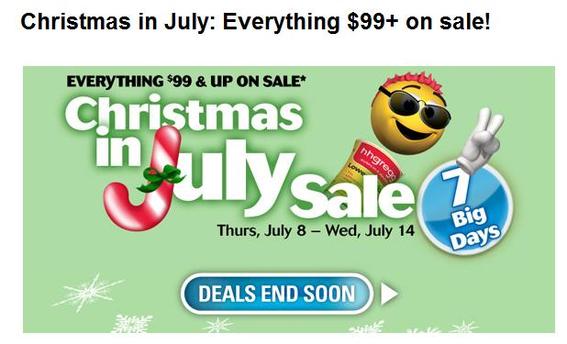 Most consumers will happily buy electronics and clothes at discount prices any time of year, but not everyone may want to buy seasonal décor and accessories when the motif du jour is sunglasses and flip-flops. To further encourage early sales, some retailers are promoting customer loyalty program, among other things.

Sears is encouraging customers to sign up for its Christmas Club card, which is designed to help shoppers to save for the holidays. On the program landing page there is a calculator that helps consumers determine how much they must save weekly to meet their target holiday budget number. The benefit to Sears, of course, is customers are saving money on a card that is only valid for use at Sears or its sister stores, Kmart, Lands’ End, mygofer.com, and The Great Indoors. 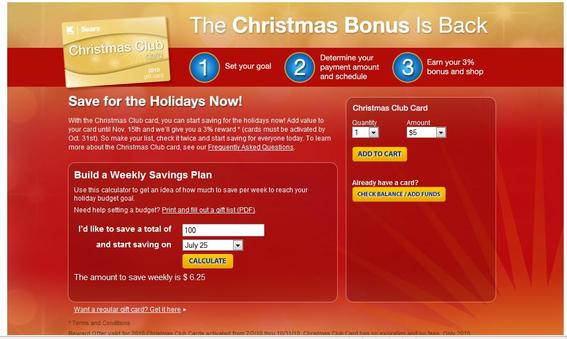 Sears’ Christmas Club card offers a 3 percent reward incentive for cards activated between July 2, 2010 and October 31, 2010. The card has no expiration date, but the 3 percent reward is based on balances calculated by 11:59 p.m. on November 15, 2010. The card limited to a maximum value of $100, which means the customer has to save and load approximately $3,333.33 to the card to earn the maximum $100 reward. On the other hand, 3 percent is more than most money market accounts are paying today.

The good news is customers like rewards and discounts. Wisely, Kmart is coupling its rewards programs and alternative payment methods alongside its Christmas in July promotions, so customers have the choice of a Christmas Club card identical to Sears’ that can be used in all the same stores, a layaway plan, or a points-based rewards systems. In doing so, the retailer is doing four things: Making it easy for the customer to buy, dealing with customer concerns up front, rewarding loyalty, and capturing holiday spend.

Recently, I interviewed a number of search marketing professionals, many of whom work for small to world-class retailers, for an in-depth industry report. One interviewee said in 2008 he relied on information from his paid search marketing platform, which was feeding him November information in December. Oops. November and December sales patterns, search traffic, and keyword bid prices vary greatly.

If you’ve been selling online for any amount of time, it’s advisable to pay attention to historical data. Granted, some of your technology partners may not be able to provide you with years of historical information because their systems may only track data for one, three, or six months. Also, history is merely an indication of what may happen in the future. If you learned lessons in 2008 and 2009 about what works and what doesn’t online or offline, pay attention because 2010 is still a relatively weak economic year, historically speaking. Customers and prospects will still be looking for good deals and free shipping.

That said, many retailers have discovered the same techniques do not necessarily guarantee the same results year after year. So make sure to run A/B and multivariate tests.

Also pay attention to your customers’ buying preferences. In the last couple of years, layaways made a comeback. Perhaps layaways don’t mesh with your business model, particularly if you run a small business with limited cash flow, but there’s probably an idea or two out there that can help you earn a few extra bucks like structuring product bundles, offering value-added or loyalty incentives, and providing exclusive offers to your best customers.

Even little things like simplifying the checkout process, providing shipping costs earlier in the cycle, and other small tweaks like using trust seals strategically can make the difference between sales and lost sales.