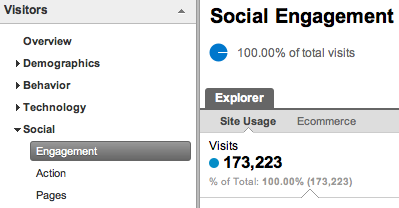 Effectively, this metric will allow site owners and managers to determine if site visitors who click social sharing buttons then visit more pages or convert at a higher rate, or whether — as some marketers worry — clicking on Facebook Like or Google +1 buttons actually distracts the user and short circuits the conversion funnel.

As mentioned above, marketers using the new version of Google Analytics will find data for the Google +1 button — not to be confused with the “Google+” social media network — under the Visitors and Social tabs. Tracking other social sharing buttons does require some site development.

The Social Actions report shows how many visitors clicked on a social-media-sharing button for a given date range. Again, note that by default this report only counts Google +1 clicks. But it nonetheless has the potential to offer interesting insights into day-of-week or hour-of-day visitor behavior. For example, there are some that believe that content aimed at males will enjoy more social interaction during evening hours while female users might interact more evenly throughout the day. The Social Actions report transforms this supposition into something measurable.

It is also possible to compare social actions with other analytics dimensions — such as traffic source, conversions, bounces, or even pay-per-click advertising — making it possible to correlate social sharing clicks with other traffic factors.

The final social sharing report, Social Pages, shows which site pages received social-sharing clicks for the given time period. Effectively, this report lets a marketer know which bits of site content generate the most social-sharing activity. This includes, for example, which blog topics encouraged the most social sharing clicks, or which product detail pages were shared the most.

Identifying the top producers of social-sharing clicks is the first step toward understanding what makes that content more sharable.

Tracking social sharing clicks for Facebook, Twitter, or other social media sites requires some site development. Google offers instructions regarding how to complete this integration for Facebook and Twitter, but those instructions assume a certain level of technical expertise and experience. This is essentially a job for someone familiar with JavaScript.

Here is an example of some code that will place a Facebook “Like” button on a given web page. This example comes directly from the Google integration instructions.

To track clicks from this “Like” button, a developer should use one of the Facebook SDK methods that includes a callback option, according to Google. This callback would activate the _trackSocial method from the Google Analytics SDK and count the click.

The pattern, then, for integrating Google Analytics Social tracking is to (1) examine the social-sharing button’s own documentation for a method that captures a click event and (2) using the Google Analytics _trackSocial method as a callback for that event.

Google Analytics Social reports can provide site owners with interesting insights about the relationship between social-sharing clicks and other site activities — such as conversions or bounces. But integrating this feature will probably require a web developer or at least someone familiar with JavaScript and an understanding of SDK documentation.