On the day news broke about the sale of MySpace for a mere $35 million, Google announced the launch of its new social network, Google+.

The search giant is rolling out Google+ incrementally by invitation only — similar to the way it introduced Gmail a few years ago — presumably to maintain tight control and quickly update it based on feedback from users. Google extended Initial invitations to technology early-adopters — here’s Robert Scoble’s profile, for example — but have since increased in number. I received an invitation a couple of days after the network went live.

Google+ is being compared to Facebook — see this article by The Christian Post — with some musing about whether it can compete with the more established social network. But, let’s take a look at what Google+ has to offer on its own merits. 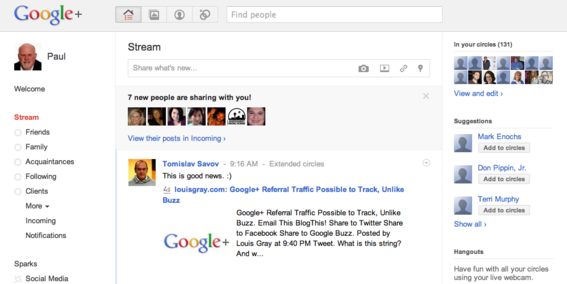 Stream is to Google+ what Newsfeed is to Facebook.

One quirk I noticed in using the network over the weekend was items that received more comments than others would crop up again at the top of the stream, a behavior that reminded me of the “Top Stories” in Facebook’s Newsfeed. I hope that Google will provide some options for what users can choose to view when they log in, as seeing the same stories over and over again quickly becomes unappealing. 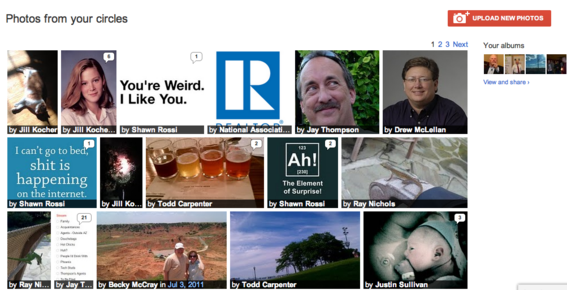 While Facebook shows photo albums created by Profile owners, Google+ defaults to show those made by friends.

During the profile creation process, Google+ asked if I wanted to incorporate photos from Picasa — Google’s photo editing software — which I did.

Google Profiles — an application that has existed for several years — has been incorporated into Google+. Profiles give users the ability to post biographical information, photos, videos and items shared using Google Buzz.

A recent addition to Profiles is the new “+1” button, which, as mentioned earlier, is Google’s version of the Facebook “Like” button. Google introduced +1 into search returns, where searchers can recommend items of interest to friends.

The use of existing Google technologies like Profiles may foreshadow Google’s real intention in creating Google+: to provide an homogenous platform through which all Google apps — such as Docs, Gmail, Reader, and YouTube — have social-sharing features in them.

Circles is what distinguishes Google+ from other social networks.

Circles is Google’s term for its friend categorization feature. It’s what distinguishes Google+ from Facebook, in my view. Using a simple drag-and-drop interface, Circles provides a way for users to separate friends by category or relationship – Acquaintances, Friends, Family, Professional Connections, and so forth. That way, users have the ability to share relevant content only with those who have reason to see it. While this is possible using Facebook’s lists feature, it is not nearly so intuitive or easy to use.

To get a better understanding of how to use Circles, here is a Google-produced video.

Google+ offers two other features that are worth noting: Sparks and Hangouts.

Sparks provide a way for Google+ users to get information about topics that are of interest to them based on category keywords. These can include topics that users can select from a list of lifestyle-related keywords — such as fashion, movies, recipes and gardening — or create their own. Content is drawn from a variety of sources including Google search, content posted by Google+ users, and from +1 data.

Hangouts is a live video-conferencing feature that users can launch to “hang out” and chat with friends. Think of it as Google’s version of Skype.

I have many questions regarding Google+, such as “What effect will it have on Facebook?” However, the question that comes to my mind more than any other is whether or not Google+ offers any benefit to businesses, especially ecommerce merchants. At present, I see no such benefits. And, I see nothing that suggests Google is even moving in that direction.

The ultimate question is whether or not Google+ will experience the same fate as Google’s other attempts at entering the social media space — Buzz, Wave, Friend Connect — all of which either failed or were met with little fanfare.

In the meantime, the adoption rate remains brisk, especially among techies and geeks. The real test is whether mainstream Facebook users will make the shift.