A new Google study reports that pay-per-click ads tend to generate new site visitors and do not simply divert traffic from organic search result links, as some marketers have feared.

PPC advertising is an important marketing channel. According to some published reports, online PPC ad spending might reach $42 billion in just the next couple of years. What’s more, PPC advertising is intrinsically easy to measure, since a marketer can count clicks and even follow those clicks through to conversions in many cases. But some advertisers are concerned that PPC ads may be deflecting clicks from the free, natural search results section and, therefore, are perhaps not as productive as click-counting would seem to indicate.

With this in mind, Google studied what happened to the number of clicks generated — both organically from search results and from ads — when PPC ads were being used and when they were not. The study — titled “Incremental Clicks Impact Of Search Advertising” and available as a PDF — then compared the total number of clicks from each scenario, with or without ads, and described the difference between the total incremental traffic that PPC ads generate.

What Are ‘Incremental’ Clicks?

So what exactly does this mean? And how does this work? An example might help.

Imagine that a marketer is spending $5,000 per month on PPC advertising. This marketer’s site is getting an average of 1,000 PPC clicks and 1,000 organic clicks per month during the PPC campaign. If the marketer stopped purchasing PPC ads altogether and started to get 1,110 organic links, that marketer’s PPC campaign would have been providing 890 incremental clicks. 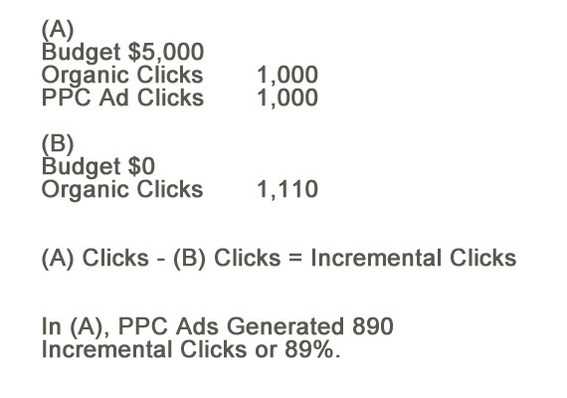 Incremental clicks are those clicks that are lost when a marketer stops advertising.

This particular example is quite meaningful, because Google researchers found that some 89 percent of PPC ad interactions, in general, came from visitors that would not have otherwise gone to the advertiser’s site. Bottom line, 89 percent of PPC traffic tends to be incremental.

Google also found that several factors could reduce an advertiser’s PPC-generated incremental traffic. If, as an example, the ad and the organic search result were physically close to each other on the page or if the paid search term represented a brand name one might expect fewer incremental ad clicks.

According to the Google study, a marketer’s own experience with the incremental traffic that PPC ads produce should be combined with data from analytics tools that monitor conversion rates and accounting data that tracks conversion revenues to determine when and how much PPC advertising is worthwhile. Finally, it may be a good idea to monitor and test PPC campaigns periodically, since Google also noted season changes in incremental ad click rates.

In application, a marketer running three PPC campaigns, might pause ad spending for one campaign for a short period every quarter and note changes to incremental traffic. With a fresh incremental traffic number, consider how many conversions the additional traffic generates and how much revenue that will ultimately produce.