When it comes to marketing, many merchants think of pay-per-click ads, or search engine optimization or even email newsletters. But one merchant has successfully used television advertising. He is Jamie Salvatori, founder and owner of VAT19.com, a retailer of unusual gift items. He uses Google’s TV ad interface, via the AdWords’ platform, to great effect. He’s here today to explain TV advertising, and Google’s TV ad interface, to us.

Practical eCommerce: You mentioned in your last interview with us your company’s success with Google TV ads. What are Google TV ads?

Jamie Salvatori: “Well, the Google TV ads platform allows anyone, businesses of any size, including very small businesses, to advertise on TV. So, it’s really just a system for allowing businesses to get their television commercials aired. If you happen to have existing television ads, you can put them through the Google TV ad platform, but essentially it’s an AdWords-like system. There are a couple caveats to that though. For most of the networks, you’re only getting airtime through Dish Network. So, what I mean by that is if you wanted your ad to play on Comedy Central, for instance, it’s only going to play on Comedy Central in homes that have Dish Network. They do have some networks, some station where your ad would be nationwide, but the majority of them are only going through Dish Network TV households, which actually isn’t the worst thing for small businesses because that brings the price down quite a bit versus running a nationwide Comedy Central for instance. So, that’s what really attracted us to that whole system is that we could get in there, we could get some pretty good frequency without having to spend an absolute fortune.”

PEC: Where do you access Google TV ads? What part of the Google site is that under?

Salvatori: “Well, once you’re signed up, you’d actually be doing all of the management through your AdWords account. But to get there initially, I would suggest just doing a Google search for ‘Google TV ads’ and then you’ll be able to find a ton of information about it.”

PEC: It’s under the AdWords interface as I recall. So, it’s Google.com/adwords/tvads. 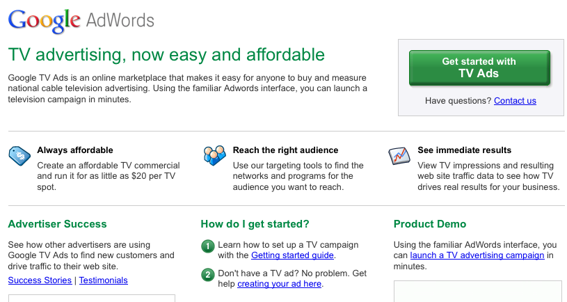 PEC: Walk us through the process of Google TV ads. For example, how do merchants create a TV spots? Do they have to have spots made before they start with Google TV ads?

Salvatori: “I don’t believe you do. My business is slightly unique in the fact that we have a history in video production, so we actually make our own commercials ourselves here. But one thing that I’ve seen Google mention often is they have a marketplace where you can go and find companies that provide the service of creating TV commercials and hook up with them and they understand the Google TV ads, the platform. Because when your spot is completed, you actually just upload the file to Google and you can upload as many commercials as you want. You can have them rotate different ones. So, it’s a pretty cool system versus what you had to do in the old days of making all these copies of tapes and mailing them to all these different stations around the country. Now, you just upload it and I think actually Google might even have a system where you can use these templated TV commercials where you can insert your own. They’ve got this templated visual content and then you add your own audio content to it and there are services where get a professional to read the voiceover. So, you can make pretty professional-quality TV commercials through their system without having to spend a ton of money.”

PEC: How much can a merchant expect to pay if they’d use as many of the do-it-yourself tools as they can?

Salvatori: “If you were very dedicated at not having to put a lot of money out of pocket, you could probably make the commercial yourself on your own using your own editing software and could then probably buy just one spot for $50 or so, and get it on the air there. So, you can do it without spending a ton of money, but the thing about TV advertising is you have to get a frequency going, so it would be a little foolish to just run one ad and be done with it unless you were spending a couple million for a Super Bowl ad.”

PEC: What about tracking? How do track the effectiveness of those TV ads?

Salvatori: “Well, you know, it’s not going to be the same as the tracking that comes with your online pay-per-click AdWords’ account. What you’re probably going to have to do is get information from your customers. ‘Did you see our TV ad?’ or ‘How did you find out about us?’ A lot of people have probably seen that on websites. When you’re completing the checkout process, oftentimes there’s a question there that said, ‘How did you hear about us?’ and that’s what we do on our website. We have somewhere between 85 and 90 percent of our customers answer that question. So, it’s not going to put a lot of people off. They’ll take the four seconds to answer it; so you just make that a question. ‘Did you find us through a search engine, a magazine ad, TV ad?’ and you can sort of track it that way, but you’re not going to be able to track what TV ad did they see and when. TV advertising is still traditional advertising, where there isn’t quite as much tracking.”

PEC: Based on the responses that your customers have provided, in terms of where they found you, Google TV ads have worked out well for you. Is that a fair statement?

Salvatori: “Yes. We’ve been really pleased because we’ve had quite a bit of success with the Google TV ads. Compared to the old method of buying TV ads, Google’s interface is easier, it’s faster, it’s less expensive, and it’s more transparent and you have more control and you can start and stop your ads whenever you want. Traditionally, if you go and do a TV campaign, they’re going to say, ‘All right, we’re going to try to run your ads, say, 40 times the next four weeks,’ or something like that and you’re locked in to that four weeks. If you get a week into it and you decide, ‘I don’t want to do this,’ you can’t stop. I mean you’re going to have to pay, probably you already put the payment of half down, but you might have to pay the whole thing and just let it ride. So, with the Google TV ads, it’s very similar to AdWords text or pay-per-click online ads, where you can just boom, pause that campaign if you don’t think it’s working or change the bid that you’re willing to pay on that advertising. So, it’s a way different system than how you traditionally buy TV ads.”

PEC: You mentioned earlier a hypothetical cost of $50 per TV spot. How is cost established on Google TV ads?

Salvatori: “It’s actually a bidding system, which is pretty interesting, and what you do is for each station and timeframe or whatever that you’re bidding on, you pick a daily budget how much you’re willing to pay for the whole day. Then you also pick a cost-per-thousand bid, meaning how much you’re willing to pay for a thousand people or a thousand households that see your advertisement.

“So, you’re bidding against other companies and you could, say, established a daily budget of $50, and then you could bid $0.75, $1 for a thousand impressions and based on how many people see your ad. That’s what you end up paying and it’s a bidding system, like how the other Google stuff works. If you bid $1, but the winning bid is $0.81, then you pay $0.81. I think what they do is they look at your daily budget number, say, it’s $100, and they multiply it by 30 days in a month and they will not let you spend over $3,000 in a month. But you might be able to exceed that amount for one day. You can change those bids as much as you want. You can change the times when your ads run. You can include or exclude certain programs. Let’s say you want to be on TLC, but you want to be on Kate Plus 8 or don’t want to be on Kate Plus 8 or whatever, you can do that type of stuff. Just right there through the AdWords system. So, you have a ton of control.”

PEC: Jamie, you purchase Google TV ads. What else do you do to bring customers to your site?

Salvatori: “Well, we do paid search through AdWords and Microsoft’s adCenter platform.

“Those are two actual main forms of advertising. We also spend a lot of time working on search engine optimization. We do email marketing. Those are actually two main ways for us to gain customers.”

PEC: Anything else on your mind for our readers, who are mainly smaller ecommerce merchants?

Salvatori: “I think Google TV ads should be something that any merchant should seriously consider and look at for a couple of reasons. First, your competitors probably aren’t going to be on TV because they don’t think that you can make a TV spot without spending thousands and thousands of dollars. The other thing to keep in mind with TV advertising is that it does not work overnight. You have to give it time and you have to find a particular market or segment that you think matches what you’re selling and you have to show them your ad over and over and over again. You know, there’s a rule that people have to see an ad at least three times before they’ll remember it and who the company is. So, if you think about that, you’ve got to have your ad running a lot and go for frequency and not reach. Meaning, don’t go for half-a-million or millions and millions of people who have seen your ad, maybe concentrate on a smaller amount of people, but make sure that the frequent number of times they see your ad is high. With TV advertising, it takes a while to become cost-effective. We had to run it months before we started covering the cost of the TV advertising and then some months after that before we started making money from it. So, it’s a long-term investment, but it can snowball on itself.”