Editor’s Note: Google is much more than a search engine. Its many products and services are innovative and, oftentimes, useful to ecommerce merchants. But keeping track of Google takes time. For 2011, we’ve asked contributor Jeff Muendel to file a monthly post on a non-search Google activity that could interest ecommerce merchants. His first installment, on Google’s fledgling high-speed fiber project, is below.

Muendel is an ecommerce expert and a diverse Internet observer. He’s also a longtime contributor, having addressed topics as varied as search engine optimization, social media, and usability.

In March 2010, the mayor of Topeka, Kansas, Bill Bunten, signed a proclamation that designated the town as “Google” for the month. This was presumably an effort to get the attention of search and technology giant, Google. In early 2010, the company announced that it was seeking test communities for fiber-optic technology that will bring ultra fast Internet connections. 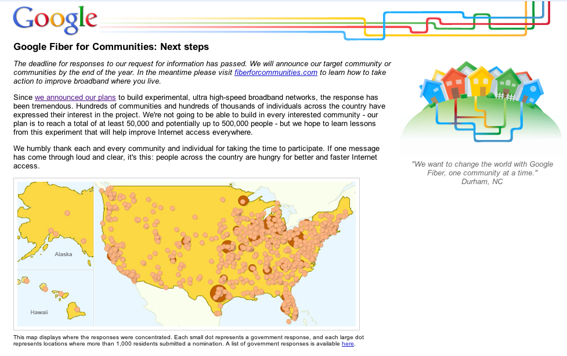 The hope that many cities had of being selected for Google’s Fiber Project was not realized in 2010. On December 15th Google’s vice president of access services, Milo Medin (who joined Google to oversee the Fiber Project team), advised blog readers to “stay tuned for an announcement in early 2011” in a blog entry about the delay of choosing a test bed(s). While Google’s Medin reports that the project is “moving ahead full steam” and that he is “excited for us to bring our ultra high-speed network to a community,” he also commented that “we want to make sure we get this right.”

To date, only a small portion – Stanford University professors and their families — of the test project has gotten underway. The company reports that the main reason for the delay is the overwhelming response that it has received from communities, with nearly 1,100 responding. Cities that submitted applications to Google can be accessed by the following link: http://www.google.com/appserve/fiberrfi/ (click on the map and then towns and counties that applied are listed by state in the drop down menu).

Considering the benefits that communities stand to gain by being selected for this project, it is no wonder that many heeded the call to become community partners. The project plans to build and test ultra high-speed broadband networks in a small number of trial communities. These networks will provide 50,000 to 500,000 people with fiber-optic broadband Internet access with a network speed of one gigabit per second. That is more than 100 times the speed that most Americans have access to at present. Some of the benefits of the ultra high-speed bandwidth could be in the areas of high-definition video, remote data storage, real-time multimedia collaboration, and “others that we cannot yet imagine,” according to Google.

Google also claims that it hopes to use this test to see what developers and users can do with this technology. Google envisions that these networks will help spawn next generation applications. It will enable new consumer applications, as well as medical, educational, and other services that can benefit communities. “If the Internet has taught us anything, it’s that the most important innovations are often those we least expect,” Google stated at the time of the application announcement.

What Are Google’s Motives?

Why is Google interested in this project? At the outset, Google stated the goal for these test communities was “to experiment with new ways to help make Internet access better and faster for everyone” and to “make a meaningful contribution” to this goal of faster and better Internet access. Chief Executive Eric Schmidt has raised the issue of better Internet access in the U.S. as a “matter of national competitiveness” by citing broadband as a critical link to new jobs and new businesses. Worldwide, the U.S. ranks 15th in terms of broadband access. Google has also urged the U.S. Federal Communications Corporation to test trials of gigabit-per-second Internet access — before deciding to try forging ahead themselves with test communities —
citing “we have the resources” and not waiting for the government to take action. Google stated that it will share what “lessons they learn” in these test markets with the world.

Yet there have been other suggestions about why Google is leading the high-speed broadband charge. Clearly, it is the kind of effort that makes sense as Google seeks to offer a whole new generation of Internet applications. Also, the forthcoming future of public use of radio spectrum may reduce costs and range issues formerly associated with Wi-Fi in general. Plus, Google’s past and present attempts at building wireless networks (in California and Oregon) may be an asset to it for this fiber project, due to the learning curve about overcoming hurdles and understanding complexities of creating community connections. In addition, some have wondered if Google plans to corner the market of Internet service providers once the networks are built. To that charge, Google has promised to operate an “open access” network, giving users the choice of multiple service providers.

Whether being driven by a company’s vision about its own sustainability or by a more altruistic vision of bringing broader access, there is no reason to believe that faster and better connections will be a bad for anyone. Along with the Dec. 15 announcement, Google was clear that the application process remains closed. In the meantime, we will all have to wait to find out if Topeka’s strategy was successful.