On Michigan’s Keweenaw Peninsula are two old copper mining communities — Kearsarge and Calumet. Calumet is home to Pasty Central, which operates a pasty kitchen in Kearsarge, the Pasty Central Express. Pasty Central is an employee-owned company, and its website, Pasty.com, has been online since 1996. The site includes the Pasty Cam Photo Of The Day, contests and hundreds of Upper Peninsula photographs. The project all started with the Still Waters Assisted Living Community (the original owners), whose residents once peeled the pasty vegetables as a regular activity. Pasty.com’s employees bought the company in 2001. 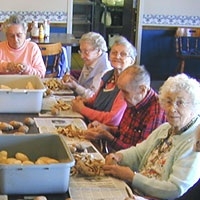 To date, Pasty.com has sold and shipped more than 375,000 hand-made pasties to 5,856 zip codes in all 50 states. Pasties are shipped frozen and cost $29 for four, which includes shipping.

General Manager Charlie Hopper has been with Pasty.com since its inception.

PeC: What is a pasty?

HOPPER: Pasties are a regional ethnic food and are hand-held meat and vegetable pies introduced by Cornish miners who migrated to Michigan’s Upper Peninsula and other mining boom regions in the 1800s. Its form is very well suited to carrying down in the mines, and it’s a high protein, high carbohydrate meal in a crust.

PeC: What are the ingredients?

HOPPER: Our pasties are made with beef, pork, potatoes, rutabaga, carrots, onions, spices and a 100 percent vegetable shortening pastry crust. However, our exact pasty recipe is a trade secret.

PeC: What is the farthest you’ve ever shipped a pasty?

HOPPER: We routinely ship to Alaska and Hawaii. We’ve had people from New Zealand, Germany and Kuwait order them for pickup at an APO (Armed Forces Post Office).

HOPPER: The links on the home page are paying sponsors, and it just evolved as more sponsors joined us. Of more interest may be the Pasty Cam page/archive design. It is a daily/weekly/monthly/yearly format that goes back to 1998. We’ll celebrate 10 years of this daily feature on February 29.

PeC: How many Pasties do you make in a day?

HOPPER: In a typical day we make 640 pasties.

PeC: How many products does Pasty.com offer?

HOPPER: In addition to the traditional, we have a breakfast pasty, veggy pasties, picnic pasty and occasionally the chicken pasty. We also sell posters, books, T-shirts and calendars.

PeC: What were some of the challenges of taking Pasty.com online?

HOPPER: First of all, understand that this business was born online. It did not exist before we put up pictures of the residents peeling veggies to make pasties. As we received requests to ship some of the pasties they were making, we developed the packaging, obtained the authorization, grew the production capability, and very importantly developed a website with tons of pictures and comments to attract visitors. When we first started, there was a real disconnect between “selling sites” and “content sites.” The selling sites were like brochures, saying we are great, buy from us, end of story. The content sites were like public television documentaries, lots of things to see, no sponsors. We decided to blend the two. Make a tourism site about the land of pasties with tens of thousands of photos and stories, and integrate the online ordering process. We were quite ahead of our time when we embarked on this in 1996. Our first pasties were shipped in August that year.

HOPPER: There are many struggles I could share, like our run-in with the USDA, changes in policy by the state of Michigan that made non-profit homes for the aged obsolete, having as our very name a keyword that is often banned by clueless spam blockers. But when we are knee deep in alligators, when everything looks hopeless, the one thing we always come back to is this: If it was easy, everybody would be doing it, which would make it not worth very much.

PeC: How do you market Pasty.com?

HOPPER: The media has been kind to us over the years, reporting on us in outlets such as USA Today, Newsweek, Midwest Living, Lake Superior Magazine, Minnesota Public Radio, numerous stations like WJR and WWJ in Detroit, syndicated broadcasts like The New York Times food editor’s program.

PeC: What shopping cart do you use?

HOPPER: We wrote our online order form before there were shopping carts.

HOPPER: Not when you’re already No. 1 or 2, as we have been for years with our product name.