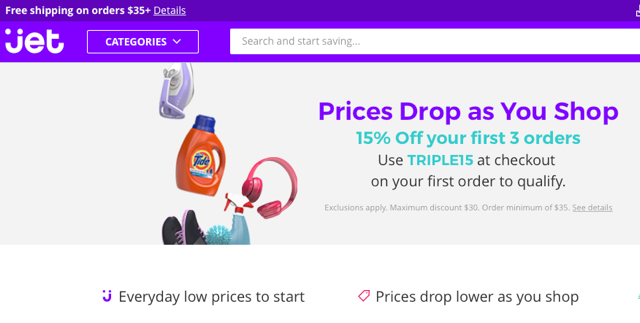 Walmart’s acquisition of Jet will be successful if Jet can give it access to younger, higher-income consumers who prefer to shop online.

Last week Walmart purchased online merchant Jet for $3 billion in cash plus up to $300 million in Walmart shares to Jet founders. While this is a lot of money, it is a minuscule amount for a company of Walmart’s size.

Walmart is the second largest U.S. ecommerce player by revenue. But it has struggled to keep pace with Amazon. Walmart’s ecommerce sales rose just 7 percent in the most recent quarter, compared with Amazon’s 31 percent growth rate. The overall U.S. ecommerce market grew about 15 percent last year according to the U.S. Department of Commerce. Walmart’s online sales of $13.6 billion are still small — about 2.8 percent — to its overall business. In comparison, Amazon achieved close to $100 billion in sales in 2015.

As for Jet, it started out, in July 2015, with a $50 membership fee that it abandoned after three months. It then started competing solely on price, a strategy that would have eventually adversely affected its ability to spend on new technology and marketing. Amazon did this early on as well but is now focusing more on profitability.

Having been in business for a little more than a year, Jet has already reached $1 billion in run-rate gross merchandise value. Jet says it has 12 million SKUs and has been adding more than 400,000 new shoppers each month, while processing an average of 25,000 orders daily. Jet has a network of 2,400 retailer and brand partners. The company has never been profitable and did not expect to accomplish this until 2020.

Jet is unique in its pricing in that the more items a customer buys in one shopping trip, the deeper the discount on all items. Also, for certain goods, if a shopper opts out of the free return feature, he or she pays less. An additional discount applies if a shopper pays with a debit card and if a person takes advantage of both features there is a further discount.

Why Is Walmart Buying Jet?

Over the past several years Walmart has done a lot of tinkering with its website but has never achieved much online traction. Until this year the technology behind Walmart’s site capped the number of products it could display to shoppers at around 8 million.

Walmart likes to dominate and although it will likely never match Amazon, it wants to make a better showing in online sales. The demographics and psychographics of Jet’s customers are much more in line with those of Amazon’s customers.

Walmart gets Marc Lore, CEO of Jet who previously ran Quidis, parent company of Diapers.com and Soap.com. He sold these businesses to Amazon in 2010 and worked for Amazon for about four years before starting Jet. Lore knows a good deal about how Amazon operates. It has been rumored that Lore’s agreement with Walmart requires him to stay with the world’s biggest retailer for at least five years or forfeit a hefty incentive package. Lore will run both Jet.com, which will remain a separate entity, and Walmart.com.

Walmart CEO Doug McMillion stated that the acquisition of Jet would inject an entrepreneurial spirit into the company. In a conference call announcing the purchase, he described Jet.com as “more urban and more millennial than Walmart.com.” He also said that Jet has been able to attract brands that Walmart does not have.

Walmart’s strategy is to reach beyond its core customer. Despite its emphasis on discounts, Jet’s customers are younger, higher income (over $65,000 per year), better educated, and more likely to shop online than Walmart’s typical customers. So Walmart is not trying to get its existing customers to buy online; it is trying to expand its customer base to a different and more lucrative demographic profile.

Despite its emphasis on discounts, Jet’s customers are younger, higher income … better educated, and more likely to shop online…

What Does Jet Get?

Jet had received $500 million in venture capital and probably could have received more and remained independent. However, Jet’s objective is to challenge Amazon. To do that, it needs to scale quickly and have the necessary infrastructure to compete. Its acquisition by Walmart gives it a better chance of accomplishing that goal. Jet gets access to money for marketing and new technology acquisition. It also gains access to Walmart’s infrastructure.

Currently Jet ships only to the contiguous 48 U.S. states. Orders are shipped either from the warehouses of its retail partners or from its own fulfillment centers. Jet offers two-day delivery for some basic household items. Amazon is moving towards one-day or same day delivery and that requires many warehouses and efficient logistics. Jet gets access to Walmart’s warehouses and its stellar supply chain management, which will presumably help it keep up with Amazon’s delivery systems. It will also be able to offer free, same day pick up in a Walmart store for many items.

Amazon has been in business for 22 years, many of them unprofitable. Now it seems to have found the right formula, thanks mostly to Amazon Prime, and its robust and efficient warehouse system. Jet will likely not match the Amazon formula anytime soon, even with Walmart’s help.

Walmart is looking to the future — one in which ecommerce will take an increasing share of consumers’ dollars. The company’s leaders are aware that people are buying more online and less in physical stores. As with other physical retailers, Walmart sales are becoming sluggish.

Earlier this year, Walmart closed 269 stores worldwide, many of which were the company’s smaller Walmart Express outlets as well as underperforming stores. Just last week Macy’s announced that it was closing 100 stores within the next year, 14 percent of all stores. The Sports Authority chain declared bankruptcy and closed all its stores earlier this month. Much of the weakness in the brick-and-mortar sector is because of the growing popularity of buying online, particularly among younger shoppers.

This acquisition will be successful for Walmart, if Jet can give it access to younger, higher-income customers who prefer to shop online, a place where Walmart has struggled.