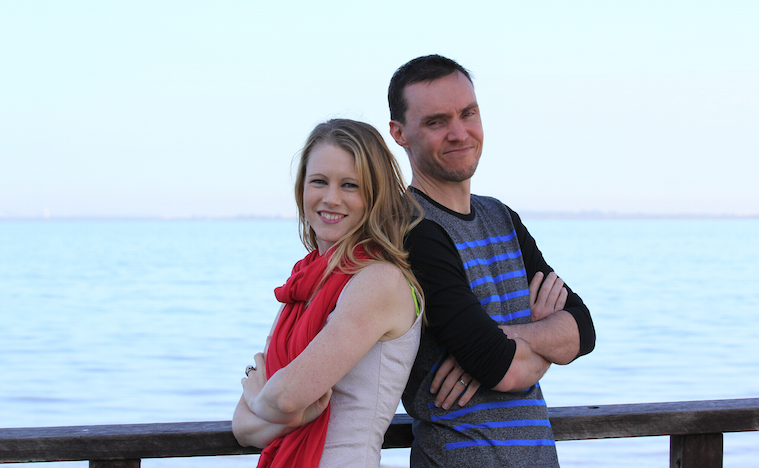 Nathan Hartnett was an air traffic control officer in the Royal Australian Air Force in his hometown of Toowoomba (a city 79 miles west of Brisbane), Australia from 2001 to 2007.

His father, circulation manager of the Toowoomba Chronicle newspaper, suggested that Nathan to read the Rich Dad, Poor Dad books and imagine how he could earn a healthy passive income.

“In 2006, my best friend was selling sewing machines on eBay. He encouraged me to research eBay for niche products that had low search engine competition, sufficient traffic, and a healthy profit margin. I found men’s jewelry,” Hartnett said.

Hartnett met his future wife Tess as she was finishing her teaching degree at University of Southern Queensland, Toowoomba.

He decided to create an online jewelry business that would give the pair the freedom to live in different countries rather than just visiting them.

“In September 2006 we made our first men’s ring sale on eBay,” Harnett said.

“Around 2009, eBay began a race to the bottom for prices, rewarding the cheapest, high-volume sellers with the highest search results. So we closed down our eBay site, launched Men’s Rings Online in 2010, and tried additional channels including party planning, markets, and wholesale distribution,” Hartnett said.

When gross revenue fell to AU$120,000 in 2013, the Hartnetts launched 30 websites — focusing on niche products with high margins — to test which attracted the most sales from a variety of search engine optimization techniques.

The websites recorded gross sales of AU$300,000 in 2014: 60 per cent by Men’s Rings Online, 20 per cent from MasksHQ, and the remainder from the other websites. 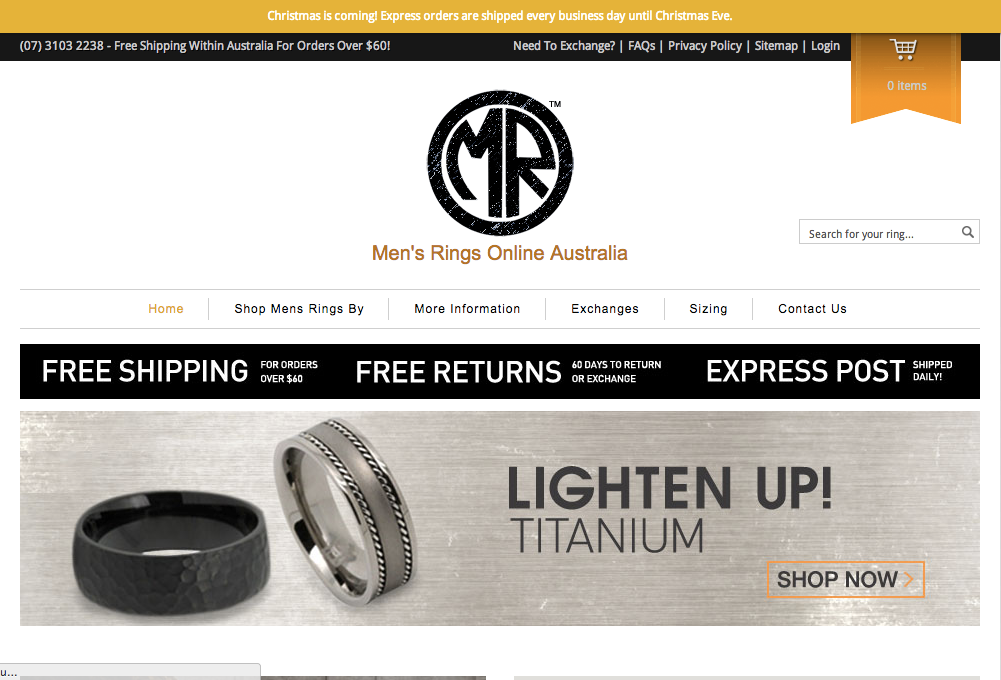 Hartnett spent $2,000 to set up Men’s Rings Online on the osCommerce platform and a further $3,000 with designers on Elance, the freelance marketplace, to undertake ongoing changes and mobile-friendly versions.

When he discovered WooCommerce in 2013, Hartnett says that he realized he could “clone” Men’s Rings Online into 30 niche testing sites and change the content himself.

“After the initial setup, WooCommerce’s non-existent costs meant that we could create dozens of niches at once, which would have been hideously expensive on other platforms,” Hartnett said.

Since 2014 Hartnett has been outsourcing graphic design, photo editing, and product descriptions.

“If we need something customized, we place a job on Elance. Most of our problems have been solved with free, or almost free, plugins,” Hartnett said.

Hartnett uses PayPal and Stripe for credit card processing. The latter costs AU$0.30 per transaction plus 1.75 percent with no setup or monthly fees, and no contract.

“PayPal’s fees differ depending on whether it’s a cross-border transaction, or what type of card is used,” Hartnett said.

In September 2013, Hartnett hired a developer on Elance to create an order management system to pull all sites’ orders into one platform.

“It cost about AU$1,200 and took eight months. But now our staff has to go to only one spot to print off pick lists, labels, and enter tracking numbers from all sites, including the international sites,” Hartnett said.

Hartnett has been using the Austin, Texas-based hosting company ASmallOrange.com since September 2013, which costs $5 per month per website.

“We’ve had no problems with hosting overseas [in the U.S.]. We simply look for speed and great service,” Hartnett said.

They have two part-time employees at a rented double-garage warehouse in Brisbane. One is Hartnett’s brother, who has been managing the shipping since 2007. The other is a pick-and-packer who joined in July 2014.

“We will hire a third member in 2015 to help with shipping and it will also provide more flexibility for our other staff members when they are sick or need holidays,” Hartnett said.

Hartnett believes online retailers should know what words and phrases their shoppers use to search for their products.

“Keyword research will tell you what words they [shoppers] use to search for the most popular styles, colors, and sizes for your products, and how you should name your categories,” Hartnett said.

Roughly 10 percent of Hartnett’s stock is drop shipped. He plans to reduce this to five percent in 2015. The rest is shipped from his warehouse.

“While drop shipping has been a great way to test niche products without holding inventory, we want to brand and ship our own products to obtain better profit margins, better branding, better photos, and a better range,” Hartnett said.

Hartnett sources rings from Asia, hammocks from Australia, and masks from the U.S. and Asia.

In the past few years, the Hartnetts have visited many factories in China, building relationships with suppliers.

“Most of them run small businesses just like us. Maintaining a healthy, give-and-take relationship establishes long-term trust, which often results in better pricing, and lower minimum order quantities,” Hartnett said.

He uses PayPal or an escrow service for payments, and requires suppliers that have sent wrong or damaged items to fix the problem at their own cost.

“You do need to bring out the ‘stick’ when establishing a new relationship, or when a supplier’s poor quality control is starting to cause problems,” Hartnett said.

Hartnett uses a WooCommerce plugin for his sites’ inventory management.

“We match our staff’s stock take [physical inventory count] against our websites’ tracking. If there are too many discrepancies, we find where the failure is and fix it with better training, or clearer procedures,” Hartnett said.

Hartnett launched international versions of his websites this year but it was only in late November 2014 that the inventory management synchronized properly.

“We use the WooCommerce Stock Synchronization plugin, which cost 39 euros, from Pronamic. It instantly updates SKU availability across multiple sites. It didn’t work at first, but Pronamic tweaked it for us at no cost so that it worked properly,” Hartnett said.

Hartnett uses the accounting software SAASU, an Australia-based cloud platform, but it is not integrated into the sites’ backend.

“We export our bank statements and email them to our bookkeeper, who we found on oDesk [another freelance marketplace]. Best decision ever!” said Hartnett.

Hartnett says that he doubts social media works. He hasn’t updated his company Facebook pages (Men’s Rings Online, which has 182 likes, and Vurge Jewellery, which has 2,988 likes) since May 2014. He has not created Facebook pages for his other sites.

“We have 3,000 fans from competitions and promotions but they haven’t been big spenders, so it’s not worth our time,” Hartnett said.

However, he may test social media for the international sites in 2015, “but only if it’s cost- and time-effective.”

Hartnett loathes spending money unless he receives a clear return on investment. But he wishes he had spent money much earlier on self-education and on outsourcing bookkeeping, content writing, and graphic design.

“I think I should have opened my pocketbook a little more,” Hartnett said.

Hartnett said selling high profit margin products allows Tess to “go above and beyond” with customers.

“She’s driven to our warehouse and then across the city to personally deliver urgent items, and sent free replacements or free add-ons to make up for any mistakes,” Hartnett said.

When one man, who was getting married in 48 hours, ordered the wrong-sized ring, Tess express-shipped him three rings in slightly different sizes so he would have the right ring for the ceremony.

“The best SEO any online retailer can have is great customer service,” Hartnett said.

Hartnett wishes he had learnt SEO much earlier.

In 2013 he spent $10,000 to test a variety of SEO techniques from buying link systems to creating content and contributing to forums and blogs.

These tests helped him understand how to generate traffic and determine what niche products sold best.

“I wish I’d found WooCommerce earlier — the other platforms were expensive and inflexible — and not made decisions out of desperation when the global financial crises occurred,” Hartnett said.

In 2012 Tess Hartnett won a competition to represent Alibaba, the huge China-based marketplace, as its female ambassador.

“We went to China and Tess spoke at several conferences about finding good suppliers in Asia and choosing products that your customers — not you — like,” Hartnett said.

The recognition buoyed the pair’s confidence and encouraged them to explore selling further niche products.

Hartnett believes this award, and the intensive SEO testing process, helped them turn their businesses around.